He inherited titles in the Jacobite and Spanish nobility on the death of his father in battle in 1734 at Philippsburg, during the War of the Polish Succession. He was also Consort Duke of Veragua and of la Vega and a Consort-Marquis of four further titles by his Spanish marriage in 1716. His full title was 2nd Duke of Berwick, 2nd Earl of Tinmouth, 2nd Baron Bosworth, 2nd Duke of Liria and Xerica, Grandee of Spain 1st class (from 1716), Knight of the Order of the Golden Fleece (from 29 September 1714), as well as the holder of several earldoms.

His father was James FitzJames, 1st Duke of Berwick, an illegitimate son of King James II of England by Arabella Churchill, sister of the 1st Duke of Marlborough.

His mother was Lady Honora Burke (1675–1698), second daughter of William Burke, (d. 1687), the seventh Earl of Clanricarde and widow of the Irish Jacobite nobleman Patrick Sarsfield, 1st Earl of Lucan. Sarsfield and Berwick were both veterans of James II's Irish Army and went into continental exile as part of the Flight of the Wild Geese.

Unfortunately, his mother died young at Pezenas, in the Languedoc, South of France, on the 16 January 1698, when he was less than 18 months old. His father later remarried and so the 2nd Duke of Berwick had 12 younger half brothers and half sisters, the eldest half brother being the origin of the line of French Dukes of Fitzjames (a title extinguished in 1967).

They had 6 children, of whom 4 survived to adulthood: [1]

The Anglo-Franco-Spanish James Fitz-James Stuart was employed by Elizabeth of Parma to achieve her military purposes, being involved in the battles on land and sea from 1717 to 1719 to regain Naples from its Austrian rulers and Sicily from the Duchy of Savoy, thus creating the Kingdom of the Two Sicilies. He fought as colonel of the Irish Regiments of Spain and Lieutenant General of the Spanish Royal Armies, being promoted to Field Marshal in February 1724.

He then served as Spanish ambassador to Russia under Emperor Peter II (December 1726 to 1730), taking with him Ricardo Wall (1694–1777), later a minister in the Spanish government. During his time in Russia he was made a Knight of the Russian Order of Saint Andrew (28 March 1728), a Knight of the Russian Order of Saint Alexander Nevsky and a Knight of the Garter (by the pretender James Stuart on 3 April 1727). From 1730 to 1733 Stuart was ambassador in Vienna, then from 1733 to his death in 1738 ambassador to the "recovered" Kingdom of Naples (taking Wall with him again on both missions).

James Fitz-James Stuart was a grandson of King James II of England by his illegitimate son James FitzJames, 1st Duke of Berwick whom he fathered with his mistress Arabella Churchill.

James FitzJames, 1st Duke of Berwick, 1st Duke of Liria and Jérica, 1st Duke of Fitz-James was an Anglo-French military leader, illegitimate son of King James II of England by Arabella Churchill, sister of the 1st Duke of Marlborough. Berwick was a successful general in the pay of Louis XIV of France.

Duke of Berwick(Spanish: Duque de Berwick) is a title that was created in the Peerage of England on 19 March 1687 for James FitzJames, the illegitimate son of King James II and Arabella Churchill. The titles of Baron Bosworth and Earl of Tinmouth were created at the same time, and they are subsidiary to the English dukedom. Since 13 December 1707, the dukedom is also a title of Spanish nobility that is accompanied by the dignity of Grandee of Spain. The title's name refers to the town of Berwick-upon-Tweed in England, near the border with Scotland.

Richard Wall y Devereux was a Spanish-Irish cavalry officer, diplomat and minister who rose in Spanish royal service to become Chief Minister. He is usually referred to as Ricardo Wall.

The Illustrious Royal Order of Saint Januarius is a Roman Catholic order of knighthood founded by Charles VII of Naples in 1738. It was the last great dynastic order to be constituted as a chivalric fraternity, with a limitation to Roman Catholics and a direct attachment to the dynasty rather than the state. The founder of the order, Charles VII of Naples, ruled from 1734 until 1759. 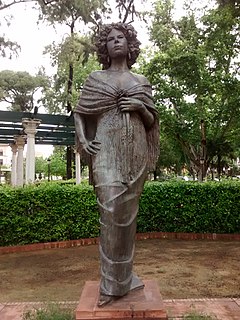 María del Rosario Cayetana Fitz-James Stuart y Silva, 18th Duchess of Alba, GE, was head of the House of Alba and the third woman to hold the dukedom of Alba in her own right. 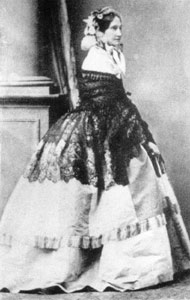 DoñaMaría Manuela Enriqueta Kirkpatrick de Grevignée, Countess of Montijo, was the mother of Eugénie, Empress of the French. 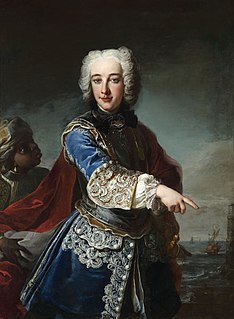 Jacobo Francisco Eduardo Fitz-James Stuart y Colón de Portugal, 3rd Duke of Berwick, 3rd Duke of Liria and Jérica, 9th Duke of Veragua, 9th Duke of la Vega was a Spanish Jacobite. On the death of his father, James Fitz-James Stuart, in 1738, he inherited his titles of Duke of Berwick and Duke of Liria and Xerica His mother was Spanish, and on her side he was a direct descendant of explorer Christopher Columbus.

The Liria Palace is a neoclassical palace in Madrid, Spain. It is the Madrid residence of the Dukes of Alba.

Jacobo Fitz-James Stuart y Falcó, 17th Duke of Alba, GE, GCVO was a Spanish noble, diplomat, politician and art collector. He was one of the most important aristocrats of his time, and held, among other titles, the Dukedoms of Alba de Tormes and Berwick, the Countship of Lemos, Lerín and Montijo and the Marquessate of Carpio. He was also a Knight of the Order of the Golden Fleece of Spain in 1926.

Lady Honora Burke (1674–1698), styled at different times as Honora Sarsfield, Countess of Lucan and Honora FitzJames, Duchess of Berwick, was an Irish aristocrat of the late seventeenth century.

Duke of Liria and Jérica is a title of Spanish nobility, accompanied by the dignity of Grandee of Spain, created the 13 of December of 1707 by King Philip V of Spain for James FitzJames, the illegitimate son of King James II and Arabella Churchill.