He rose in political office, serving as sheriff of Tryon County (1775), justice of the peace of Rutherford County (1780–1800), and comptroller of Rutherford County from (July 1782 - January 1785). He was first elected to the North Carolina State Senate, serving in 1783 and to the North Carolina House of Commons in 1786 and 1789, and was a delegate to the Fayetteville Convention which adopted the United States Constitution in 1789. From the legislature, he was appointed to the board of trustees for the University of North Carolina at Chapel Hill; he served as a trustee from 1789 to 1795. [2]

In the 1790s, Holland studied law; he was admitted to the bar on October 15, 1793, and began to practice law in Rutherfordton. In 1794, he was elected as a Republican to the 4th United States Congress, serving from March 4, 1795, to March 3, 1797. Although he chose not to run for re-election to Congress, he returned to the North Carolina Senate in 1797 and returned to farming and a law practice. [2] 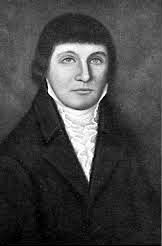 Richard Dobbs Spaight was the eighth Governor of the U.S. state of North Carolina from 1792 to 1795.:

Joseph "Quaker Meadows" McDowell Jr. was an American planter, soldier, and statesman from North Carolina. He was known as "Quaker Meadows Joe" to distinguish him from his cousin Joseph "Pleasant Gardens" McDowell, who was also a legislator and American Revolutionary War officer from North Carolina. The two men are not always clearly distinguished in historical records; both were in the 1780 Battle of Kings Mountain, one as a major in the Burke County Regiment of the North Carolina militia, and the other in a subordinate role as a captain.

Alexander Mebane, Jr. was a U.S. Congressman from the state of North Carolina from 1793 to 1795. He was also a brigadier general in the North Carolina militia during the Revolutionary War.

Matthew Locke was a general during the American Revolutionary War, a wagon driver, and a U.S. Congressman from North Carolina between 1793 and 1799.

Colonel Dempsey Burgess was a Democratic-Republican U.S. Congressman from North Carolina between 1795 and 1799. He was commandeer of the Camden County Regiment of the North Carolina militia during the American Revolution.

Samuel Holten was an American physician and statesman from Danvers, Massachusetts. He represented Massachusetts as a delegate to the Continental Congress and a member of the United States House of Representatives.

James Schureman was an American merchant and statesman from New Brunswick, New Jersey. He represented New Jersey in the Continental Congress as well as the United States House of Representatives and United States Senate.

Matthew Clay was a United States Representative from Virginia.

Adlai Osborne was a lawyer, public official, plantation owner, and educational leader from Rowan County, North Carolina (became Iredell County in 1788. During the American Revolution, he served on the Rowan County Committee of Safety and commanded the 2nd Rowan County Regiment of the North Carolina militia. He was elected as a delegate to the Continental Congress, but did not serve. In 1789, he was a delegate to the convention in Fayetteville that ratified the United States Constitution.

The Salisbury District Brigade was an administrative division of the North Carolina militia during the American Revolutionary War (1776–1783). This unit was established by the Fourth North Carolina Provincial Congress on May 4, 1776, and disbanded at the end of the war.