James Albert Pike (February 14, 1913 – c. September 3–7, 1969) [4] was an American Episcopal bishop, prolific writer, and one of the first mainline religious figures to appear regularly on television.

His outspoken, and to some, heretical views on many theological and social issues made him one of the most controversial public figures of his time. He was an early proponent of ordination of women and racial desegregation within mainline churches. [5] Pike was the fifth Bishop of California. Late in his life he explored psychic experimentation in an effort to contact his recently deceased son.

Pike was born in Oklahoma City on February 14, 1913. His father died when he was two, and his mother married California attorney Claude McFadden. The young Pike was a Roman Catholic and considered the priesthood; however, while attending the University of Santa Clara (1930–1932), he came to consider himself an agnostic. Thereafter, Pike transferred to the University of California, Los Angeles, for a year (1932–1933) before transferring again to the University of Southern California, where he received his undergraduate degree in 1934 and LL.B. in 1936. Subsequently, he earned his J.S.D. (1938) degree from Yale Law School as a Sterling Fellow. He was admitted to the California bar in 1936. After leaving Yale, he served as a staff attorney for the New Deal-era Securities and Exchange Commission in Washington, D.C. from 1938 to 1942. He also served as a lecturer in law at the Catholic University of America (1938–1939) and George Washington University (1938–1942). In the Second World War, he served with Naval Intelligence.

Pike first served as a curate at St. John's Episcopal Church, Lafayette Square in Washington, D.C. from 1944 to 1946. [6] He then accepted an appointment as Rector of Christ Church, Poughkeepsie where he served Episcopalian students at Vassar College. [7] [6] In 1949, he became chaplain at Columbia University. [6]

Pike graduated from Union Theological Seminary in 1951. [6] Remaining on the adjunct faculty of Columbia, Pike became the Dean of the Cathedral of St. John the Divine in 1952. Using his new position and media savvy, he vociferously opposed the local Catholic bishops over their attacks on Planned Parenthood and their opposition to birth control. He accepted an invitation to receive an honorary doctorate from the University of the South in Tennessee, but then publicly declined after finding that the university did not admit African Americans. An example of Pike's use of the media is how he released his letter to The New York Times before it was delivered to Sewanee's trustees: they heard the news when reporters called for reactions. [5] It was also at this time that he publicly challenged Senator Joseph McCarthy's allegation that 7,000 American pastors were part of a Kremlin conspiracy; when the newly elected President Dwight D. Eisenhower backed up Pike, McCarthy and his movement began to lose their influence. [8]

Pike was elected as bishop coadjutor of California in 1958 and succeeded to the see a few months later, following the death of his predecessor, Karl Morgan Block. He served in this position until 1966, when he resigned to become a senior fellow for the Center for the Study of Democratic Institutions in Santa Barbara, California, a liberal think tank founded by Robert Maynard Hutchins. During this period, he was an adjunct professor at the University of California, Berkeley, School of Law (1966–1967) and the Graduate Theological Union (1966).

His episcopate was marked by both professional and personal controversy. He was one of the leaders of the Protestants and Other Americans United for the Separation of Church and State movement, which advocated against John F. Kennedy's presidential campaign because of Catholic teachings. [10] While at Grace Cathedral, he was involved with promoting a living wage for workers in San Francisco, the acceptance of LGBT people in the church, and civil rights.[ citation needed ] He also recognized a Methodist minister as having dual ordination and freedom to serve in the diocese. [11] Later, he ordained a woman as a first-order deacon, now known as a "transitional deacon", usually the first step in the process towards ordination in the priesthood in the Episcopal church. The ordination was not approved until after Pike's death. [12]

Among his notable accomplishments, Pike invited Martin Luther King Jr. to speak at Grace Cathedral in San Francisco in 1965 following his march to Selma, Alabama.

Pike's theology involved the rejection of central Christian beliefs. His writings questioned a number of widely accepted beliefs, including the virginity of Mary, the Mother of Jesus; [13] the doctrine of Hell, and the Trinity. [13] He famously called for "fewer beliefs, more belief." [12] Heresy procedures were begun in 1962, 1964, 1965, and 1966, each growing in intensity, but in the end the Church decided it was not in the denomination's best interest to pursue an actual heresy trial. [5] He was censured in 1996 by the House of Bishops, which said "His writing and speaking on profound realities with which Christian faith and worship are concerned are too often marred by caricatures of treasured symbols and at the worst, by cheap vulgarizations of great expressions of the faith." [6]

In his personal life, Pike had been a chain-smoker and an alcoholic. [14] His charismatic personality drew many people to him, including Maren Hackett Bergrud, with whom he developed a romantic relationship after the failure of his second marriage in 1965.

In 1966, Pike's son Jim took his own life in a New York City hotel room. Shortly after his son's death, Pike reported experiencing poltergeist phenomena—books vanishing and reappearing, safety pins open and indicating the approximate hour of his son's death, half the clothes in a closet disarranged and heaped up. [15] Pike led a public pursuit of various spiritualist and clairvoyant methods of contacting his deceased son to reconcile. In September 1967, Pike participated in a televised séance with his dead son through the medium Arthur Ford, an ordained minister in the Disciples of Christ church. Pike detailed these experiences in his book The Other Side .

Pike's first marriage to Jane Alvies ended in divorce in 1941. He married Esther Yanovsky in 1942. She filed for divorce from Pike in 1966. They had four children, two boys and two girls.[ citation needed ] He lived with, but did not marry, his secretary Maren Bergrud, until 1967, when she committed suicide after they had an argument (he performed the funeral for her in his church). In 1968 he married Diane Kennedy (born 1938), with whom he had collaborated on a book detailing his experience with spiritualism. [5]

In August 1969, Pike and Diane traveled to Israel, to perform research for a proposed book. On September 2 they drove into the Judean Desert. In preparation for a book on the historical Jesus, they wanted to have a feeling for the landscape where Jesus went into the wilderness to fast and meditate for 40 days. They were unprepared for the journey, having taken along only two Cokes and no water. When their rented car became stuck in a deep rut, the two were not able to extract it (the car's jack was defective). After an hour of stressful efforts to get the car to move, they decided to walk toward Qumran, where they knew there would be water. What they did not know was that they were far south of Qumran in Wadi Mashash. After two hours of walking in the very hot sun, Pike felt he had to rest. Diane was concerned that, without water, they would both die there. She determined to walk on to find help. After ten long hours of climbing on the walls of the canyon and stumbling along a road under construction, she came upon a camp of Arab laborers. They gave her tea to drink until the foreman came and took her to the nearest army camp. It took four days to find Pike's body. He had tried to follow his wife and had fallen more than 60 feet down a steep canyon wall where he died. The probable date of his death is September 2; some sources cite it as between September 3 and 7. He was buried in the Protestant cemetery in Jaffa, Israel, on September 8, 1969.

Frank William Stringfellow (1928–1985) was an American lay theologian, lawyer and social activist. He was active mostly during the 1960s and 1970s.

Francis Joseph Hall (1857–1932) was an American Episcopal theologian and priest in the Anglo-Catholic tradition. Hall was the one of the first to attempt an Anglican systematic theology.

In Christianity, concelebration is the presiding of a number of presbyters at the celebration of the Eucharist with either a presbyter or bishop as the principal celebrant and the other presbyters and bishops present in the chancel assisting in the consecration of the Eucharist. The concelebrants assist the principal celebrant by reciting the Words of Consecration together with him, thus effecting the change of the eucharistic elements. They may also recite portions of the Eucharistic Prayer. Concelebration is often practiced by ministers/priest of Churches that are in full communion with one another, e.g. the Anglican Communion and the Old Catholic Church.

Although less common than in the medieval period, formal charges of heresy within Christian churches still occur. Key issues in the Protestant churches have included modern biblical criticism, the nature of God, female pastors, and the acceptability of homosexual clergy. The Catholic Church, through the Congregation for the Doctrine of the Faith, appears to be particularly concerned with academic theology.

The Other Side is a book written by Bishop James Pike with Diane Kennedy about his experiences of paranormal phenomena following his son's suicide by gunshot in New York City in 1966. The book was published by Doubleday and Co. Inc., Garden City, NY, in 1968 and in paperback, Dell Publishing, NY, 1969. 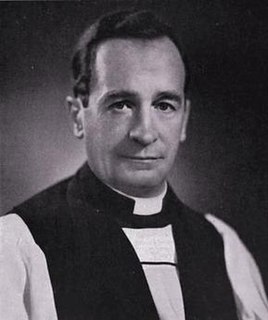 Horace William Baden Donegan was a bishop of the Episcopal Church in the United States of America and served as the Bishop of New York from 1950 to 1972.

Robert Rae "Bob" Spears Jr. was a prominent American prelate who served as Bishop of Rochester from 1970 to 1984.

Sean W. Rowe is the eighth and current Episcopal Bishop of the Episcopal Diocese of Northwestern Pennsylvania.

John Michael Fearns was an American clergyman of the Roman Catholic Church. He served as an auxiliary bishop of the Archdiocese of New York from 1957 to 1972.

Robert Elwin Terwilliger was a suffragan bishop of the Episcopal Diocese of Dallas.

James Michael Mark Dyer was bishop of the Episcopal Diocese of Bethlehem from 1982 to 1995.

The Philadelphia Eleven are eleven women who were the first women ordained as priests in the Episcopal Church on July 29, 1974, two years before General Convention affirmed and explicitly authorized the ordination of women to the priesthood.

William Forman Creighton was the fifth bishop of the Diocese of Washington in the Episcopal Church in the United States of America.

Calvin Cabell Tennis is an American prelate who was the Bishop of Delaware from 1986 to 1997.

Chauncey Kilmer (Kim) Myers was bishop of the Diocese of California in the Episcopal Church from 1967 to 1979.

Ned C. Cole Jr. was bishop of the Episcopal Diocese of Central New York from 1969 to 1983, having previously been coadjutor bishop since 1963.

Robert Campbell Witcher Sr. was the sixth bishop of the Episcopal Diocese of Long Island, serving from 1977 to 1991.

James Pernette deWolfe was the fourth bishop of the Episcopal Diocese of Long Island. 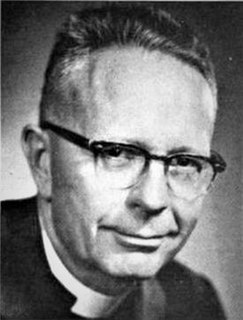 George West Barrett was an Episcopal prelate who served as the forth Bishop of Rochester between 1963-1969.