Having served in the Anglo-Dutch Brigade with William III in Holland and Flanders (1686–8),he was commissioned as a Captain and Lieutenant-Colonel in the 1st Foot Guards on 11 April 1689. When his elder brother,the 9th Earl of Derby,as Lord Lieutenant of Lancashire was ordered to call out the Lancashire Militia,Lt-Col James Stanley commanded the brigade (three regiments of foot and three troops of horse) in the subsequent campaign in Ireland in 1690–91. When the Lancashire Militia returned home to be disembodied at the end of the campaign,and Stanley was ordered to Flanders to join Colonel Hodges' Regiment as second-in-command,he induced a large number of his militiamen to volunteer to fill vacancies in the regiment. After Col Hodges was killed at the Battle of Steenkerque in 1692,Stanley succeeded to the command,and the regiment became 'Stanleys' (later the Bedfordshire and Hertfordshire Regiment). He remained its colonel until 1705. [2] [3] [4] He was promoted to major general in 1704. [1] [3]

In 1702,he succeeded his elder brother as 10th Earl of Derby and entered the House of Lords. In 1732,he succeeded his great-niece as sixth Baron Strange. [1] Derby was admitted to the Privy Council in 1706 and appointed Chancellor of the Duchy of Lancaster,a position he retained until 1710,and was later Captain of the Yeomen of the Guard from 1715 to 1723. He also served as Lord Lieutenant of Lancashire during 1702–1710 and 1714–1736.

In February 1705 he married Mary Morley,only daughter of Sir William Morley of Halnaker and his second wife Anne Denham,daughter of the celebrated poet Sir John Denham and his first wife Anne Cotton. He died on 1 February 1736,aged 68,without surviving issue (his only son,William,born 31 January 1710,died on 4 March following). The Earl was succeeded in the earldom by his distant relative Edward Stanley,11th Earl of Derby. The barony of Strange and lordship of the Isle of Man ('Lord of Mann') passed on to his first cousin once removed,James Murray,2nd Duke of Atholl. Lady Derby died on 29 March 1752. [1]

Frederick Arthur Stanley, 16th Earl of Derby, styled as Hon. Frederick Stanley from 1844 to 1886 and as The Lord Stanley of Preston between 1886 and 1893, was a Conservative Party politician in the United Kingdom who served as Colonial Secretary from 1885 to 1886 and Governor General of Canada from 1888 to 1893. An avid sportsman, he built Stanley House Stables in England and is famous in North America for presenting Canada with the Stanley Cup. Stanley was also one of the original inductees of the Hockey Hall of Fame. 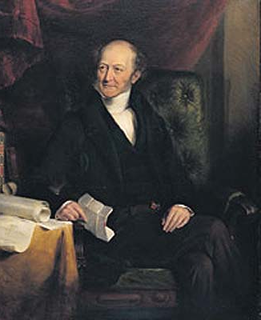 Field Marshal George Hamilton, 1st Earl of Orkney, KT, styled Lord George Hamilton from 1666 to 1696, was a British soldier and Scottish nobleman and the first British Army officer to be promoted to the rank of field marshal. After commanding a regiment for the cause of William of Orange during the Williamite War in Ireland, he commanded a regiment in the Low Countries during the Nine Years' War. He then led the final assault at the Battle of Blenheim attacking the village churchyard with eight battalions of men and then receiving the surrender of its French defenders during the War of the Spanish Succession. He also led the charge of fifteen infantry battalions in an extremely bloody assault on the French entrenchments at the Battle of Malplaquet. In later life, he became a Lord of the Bedchamber to George I and was installed as Governor of Edinburgh Castle.

Sir Gilbert Heathcote, 1st Baronet, was a British merchant and Whig politician who sat in the English and British House of Commons between 1701 and 1733. He was a Governor of the Bank of England and was Lord Mayor of London in 1711.

This is an incomplete list of people who have served as Custos Rotulorum of Lancashire. 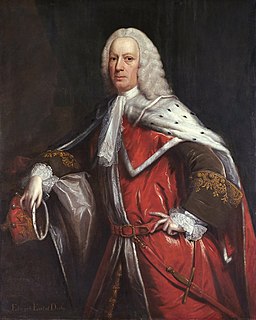 William Richard George Stanley, 9th Earl of Derby, styled Lord Strange from 1655 to 1672, was an English peer and politician.

George Compton, 4th Earl of Northampton, PC, styled Lord Compton from 1664 to 1681, was a British peer and politician.

James Smith-Stanley, Lord Strange (1716–1771) was commonly known by that title, though neither he nor his father had any claim to it. He was the eldest son of Edward Stanley, 11th Earl of Derby, whose predecessor's heirs had used that courtesy title, but the right to two successive baronies Lord Strange had descended to daughters, when the earldom had passed to the heir male.

The 6th Royal Lancashire Militia was an auxiliary regiment raised in the county of Lancashire in North West England just before the Crimean War. It later became part of the Manchester Regiment. Although primarily intended for home defence, its battalions saw active service during the Second Boer War. Following conversion to the Special Reserve (SR) under the Haldane Reforms it supplied reinforcements to the fighting battalions during World War I. After a shadowy postwar existence the unit was finally disbanded in 1953.

The 1st Royal Lancashire Militia was an auxiliary regiment raised in the county of Lancashire in North West England during the 17th Century. Primarily intended for home defence, it saw active service in Ireland under King William III, as well as against the Jacobite Risings of 1715 and 1745. It spent long periods on defence duties during the wars of the 18th Century and early 19th Century, and was stationed on the Ionian Islands during the Crimean War. It later became part of the King's Own and saw active service in the Second Boer War. After its conversion to the Special Reserve under the Haldane Reforms, it supplied reinforcements to the fighting battalions during World War I. After a shadowy postwar existence the unit was finally disbanded in 1953.