James Underwood Cross (April 25, 1925 – July 11, 2015) was a United States Air Force brigadier general and author of Around the World with LBJ: My Wild Ride As Air Force One Pilot, White House Aide, and Personal Confidant, [1] with Denise Gamino and Gary Rice. He was a military aide and chief Air Force One pilot under United States president Lyndon B. Johnson. [2]

Cross was born in Andalusia, Alabama on April 25, 1925, to James Kenison Cross and Susie Jesse Wells Cross. [3] He attended Alabama Polytechnic Institute (now Auburn University) for two years before being recalled to active duty in the U.S. Air Force. [4] His wife, Marie Campbell Cross of Austin, Texas died in February 2010 and is buried in Pleasant Home, Alabama, near Andalusia. [5] They had four children together; one child, June Rainwater, died in 2001. Cross died on July 11, 2015 in Gatesville, Texas. Cross will be buried in Alabama next to his wife. [6]

General Cross was trained as a pilot by the U.S. Army and was commissioned a second lieutenant in the U.S. Army Air Forces [Note 1] in November, 1944. Cross began his military career flying transport aircraft in World War II. After joining the Air Force Reserve in 1946, he was recalled to active duty in 1948 and served at military bases flying transport aircraft in the Philippines, South Carolina, Newfoundland, and Delaware. Cross was sent to Bolling Air Force Base in Washington D.C. in 1958, where he served as pilot for VIP aircraft. [7] In 1961, he was appointed military aide and pilot to Vice President Lyndon Johnson. Following the assassination of President John F. Kennedy in November 1963, Johnson requested that Cross become qualified to fly the Boeing 707, the 707 being the airframe on which the USAF VC-137 presidential aircraft is based. He served as a co-pilot for one year and then served as Armed Forces Aide and pilot to President Lyndon Johnson from 1965 to 1968. [8]

In August 2010, Cross arranged for one of the C-140 Lockheed JetStar planes formerly used to transport President Johnson from the White House to his Texas ranch to be loaned from the National Museum of the United States Air Force, refinished and relocated to the Lyndon B. Johnson National Historical Park in honor of what would have been Johnson's 102nd birthday. [9] [10]

On February 23, 1962, Cross flew Vice President Lyndon Johnson, then-Chairman of the National Space Council, to Grand Turk Island, where Lieutenant Colonel John Glenn Jr., USMC had splashed down in Friendship 7 after completing the Project Mercury space expedition. Colonel Glenn joined Cross in the cockpit on the flight back to Patrick Air Force Base, Florida. [11] 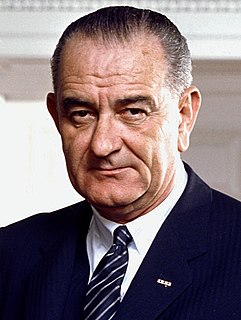 Lyndon Baines Johnson, often referred to by his initials LBJ, was an American politician who served as the 36th president of the United States from 1963 to 1969, and previously as 37th vice president from 1961 to 1963. He assumed the presidency following the assassination of President John F. Kennedy. A Democrat from Texas, Johnson also served as a United States Representative and as the Majority Leader in the United States Senate. Johnson is one of only four people who have served in all four federal elected positions. 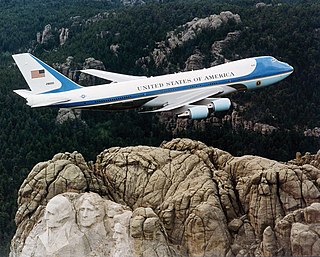 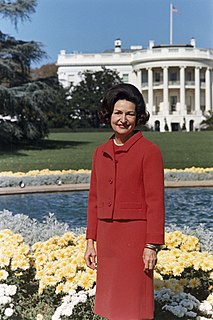 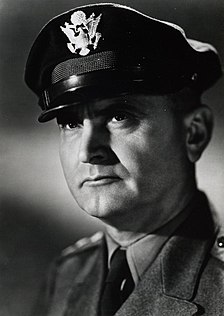 General Ira Clarence Eaker was a general of the United States Army Air Forces during World War II. Eaker, as second-in-command of the prospective Eighth Air Force, was sent to England to form and organize its bomber command. However while he struggled to build up airpower in England, the organization of the Army Air Forces kept evolving and he was named commander of the Eighth Air Force on December 1, 1942. 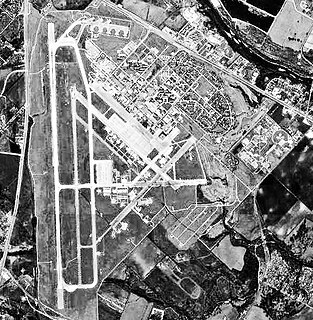 Bergstrom Air Force Base (1942–1993) was located seven miles southeast of Austin, Texas. In its later years it was a major base for the U.S. Air Force's RF-4C reconnaissance fighter fleet.

The Lyndon Baines Johnson Library and Museum, also known as the LBJ Presidential Library, is the presidential library and museum of Lyndon Baines Johnson, the 36th President of the United States (1963–1969). It is located on the grounds of the University of Texas at Austin, and is one of 13 Presidential Libraries administered by the National Archives and Records Administration. The LBJ Library houses 45 million pages of historical documents, including the papers of President Johnson and those of his close associates and others. 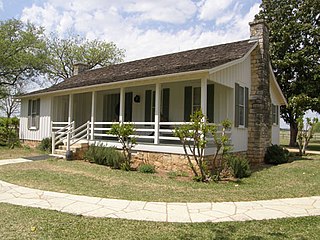 Lyndon B. Johnson National Historical Park is a United States National Historical Park in central Texas about 50 miles (80 km) west of Austin in the Texas Hill Country. The park protects the birthplace, home, ranch, and final resting place of Lyndon B. Johnson, 36th President of the United States. During Johnson's administration, the LBJ Ranch was known as the "Texas White House" because the President spent approximately 20% of his time in office there.

The Lyndon B. Johnson School of Public Affairs is a graduate school at the University of Texas at Austin that was founded in 1970 to offer professional training in public policy analysis and administration for students interested in pursuing careers in government and public affairs-related areas of the private and nonprofit sectors. Degree programs include a Master of Public Affairs (MPAff), a mid-career MPAff sequence, 16 MPAff dual degree programs, a Master of Global Policy Studies (MGPS), eight MGPS dual degree programs, an Executive Master of Public Leadership, and a Ph.D. in public policy.

The Aviation Section, Signal Corps, was the aerial warfare service of the United States from 1914 to 1918, and a direct statutory ancestor of the United States Air Force. It absorbed and replaced the Aeronautical Division, Signal Corps, and conducted the activities of Army aviation until its statutory responsibilities were suspended by President Woodrow Wilson in 1918. The Aviation Section organized the first squadrons of the aviation arm and conducted the first military operations by United States aviation on foreign soil.

Alvin Swauger "Al" White was an American test pilot and mechanical engineer. He flew the maiden flights of both XB-70 Valkyrie aircraft, the first 2,000 mph flight, and all subsequent Mach 3 exploration flights.

Craig Air Force Base near Selma, Alabama, was a U.S. Air Force undergraduate pilot training (UPT) that closed in 1977. Today the facility is a civilian airport known as Craig Field Airport and Industrial Complex.

Raymond L. Telles Jr. was the first Mexican-American Mayor of a major American city, El Paso, Texas. He was also the first Hispanic appointed as a U.S. ambassador.

SAM 26000 was the first of two Boeing VC-137C United States Air Force aircraft specifically configured and maintained for use by the President of the United States. It used the callsign Air Force One when the President was on board, otherwise SAM 26000, with SAM indicating Special Air Mission.

Cecil William Stoughton was an American photographer. He is best known for being President John F. Kennedy's photographer during his White House years.

Ellington Field Joint Reserve Base is a joint installation shared by various active component and reserve component military units, as well as aircraft flight operations of the National Aeronautics and Space Administration (NASA) under the aegis of the nearby Johnson Space Center. The host wing for the installation is the Texas Air National Guard's 147th Reconnaissance Wing. Opened in 1917, Ellington Field was one of thirty-two Air Service training camps established after the United States entry into World War I. It is named for 1st Lt. Eric Ellington, a U.S. Army aviator who was killed in a plane crash in San Diego, California in 1913.

Charles Rankin Bond, Jr. was an American pilot and United States Air Force officer. He served with the Flying Tigers in Burma and China during World War II. He was shot down twice and was credited with shooting down 9.5 Japanese airplanes. He later served in the Soviet Union as an aide and personal pilot to W. Averell Harriman. He rose to the rank of brigadier general and, during the Vietnam War, he was the deputy commanding officer of the 2d Air Division in Vietnam and the 13th Air Force in the Philippines. He retired from the United States Air Force in 1968 as commander of the Twelfth Air Force. In 1984, Bond's diary of his service with the Flying Tigers was published and became a bestseller. 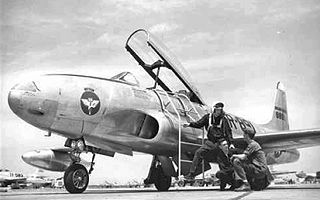