Vice Admiral Anders Jan-Eric Törnqvist (born 9 October 1959) is a retired Swedish Navy officer. Before his retirement in 2020, he served as the Chief of Joint Operations of the Swedish Armed Forces from 2016 to 2020 and as Commandant General in Stockholm from 2019 to 2020.

Thörnqvist began his career at the age of fifteen in the Swedish Sea Cadet Corps. [1] He was commissioned into the Swedish Navy in 1976 and served as a basic Private and Petty Officer afloat on various types of ships in the Navy, including Minesweepers, Destroyers, Fast Patrol and Picket Boats. [2] [3] In 1981, he entered the Royal Swedish Naval Academy and graduated in 1982. He was commissioned as a Lieutenant Junior Grade and moved immediately to complete the Principal Warfare Officer training course. Thörnqvist was promoted to Lieutenant in 1983. [2] From 1982 to 1983 he was 2nd Officer on Mine Warfare Ship and Icebreaker HSwMS Thule and various Mine Countermeasures Wessels. [3] In addition, he became a qualified mine clearance diver and he served as 1st Instructor at the Naval Mine Warfare School (Minkrigsskolan). [2]

He was commanding officer of the Diving Support Vessel HMS Skaftö from 1987 to 1988 and completed the Staff Course at the Swedish National Defence College in 1989. [2] Thörnqvist was commander of the Naval MCM Divers Squadron (Röjdykardivisionen) from 1993 to 1996 and commanding officer of 411th MCM Divers Squadron and the Minehunter HMS Ulvön. From 1997 to 1999 he completed the Advanced Command Program at the Swedish National Defence College and was then Chief of Staff in the Visby-class corvette Trials Unit at the 3rd Naval Warfare Flotilla in Karlskrona from 1999 to 2001. [2]

Thörnqvist was promoted to commander and served as Staff Officer at the Swedish Armed Forces Headquarters, Joint Forces Development, Staff Department, Analysis Section from 2001 to 2004. In June 2004 he attended the Naval Command College at the Naval War College in the United States. From 2005 to 2006 he headed the Forces Development, Plans and Policy Staff in the Joint Headquarters and from 2006 to 2009 Thörnqvist was commander of the 4th Naval Warfare Flotilla. From October to December 2009 he commanded the Karlskrona naval base. [2]

He was between 14 April and 14 August 2010 the EU Force Commander of EUNAVFOR Somalia - Operation ATALANTA and lead the multinational Force Headquarters on board the EU NAVFOR Swedish warship, HSwMS Carlskrona. [4] Thörnqvist was promoted on 1 March 2011 to Rear Admiral and was appointed Chief of Navy the same day [5] and was in this position the head of the Maritime Component Command. On 7 April 2016 he was promoted to vice admiral and appointed Chief of Joint Operations (Insatschef) of the Joint Forces Command (Insatsstaben). He assumed the position on 18 April 2016. [6] [7] In 2019, Jan Thörnqvist was appointed Commandant General in Stockholm. [8] Törnqvist retired in 2020 and was succeeded as Chief of Joint Operations by Lieutenant General Michael Claesson. [9] 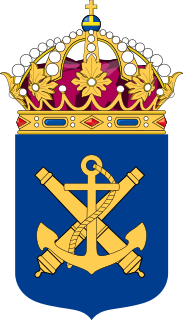 The Swedish Royal Navy is the naval branch of the Swedish Armed Forces. It is composed of surface and submarine naval units – the Royal Fleet – as well as marine units, the Amphibious Corps (Amfibiekåren). 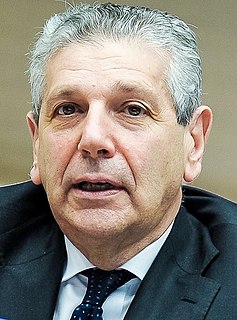 Giampaolo Di Paola is an Italian naval officer who served in the government of Italy as minister of defense from November 2011 to April 2013. He was the Italian military's Chief of Staff from 10 March 2004 to 8 February 2008 and served as Chairman of the NATO Military Committee from 2008 to 2011.

Vice Admiral Johan Retief was the Chief of the South African Navy from 2000 to 2005.

General Per Micael Bydén is the Supreme Commander of the Swedish Armed Forces, appointed on 11 September 2015. He was earlier senior commander in the Swedish Air Force. Bydén served as the Chief of Air Force between 2012 and 2015.

Rear Admiral Jens Gunnar Peter Nykvist is a Swedish Navy officer. Nykvist senior commands include commanding officer of the 1st Submarine Flotilla and the Maritime Component Command. He served as the Chief of Navy from 2016 to 2020. Nykvist currently serves in the Ministry of Defence.

Lieutenant General Anders Tommy Silwer is a retired Swedish Air Force officer. His last position was as the Chief of Armed Forces Training & Procurement from 2014 to 2017. 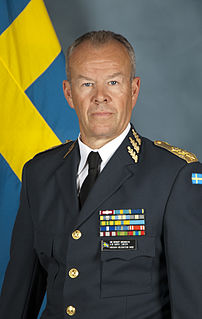 Vice Admiral Peter Esbjörn Nordbeck is a Swedish Navy officer. He was Chief of the Defence Staff from 1992 to 1994 and the Chief of Navy Staff from 1994 to 1998.

Rear Admiral Erik Torsten Lindh is a Swedish Navy officer. He was Inspector General of the Navy from 1998 to 2001.

Rear Admiral Jörgen Fredrik Ericsson is a retired Swedish Navy officer. His senior commands include commanding officer of the 3rd Surface Warfare Flotilla from 1999 to 2001, the Inspector (General) of the Navy from 2001 to 2005 and Chief of Staff as well as head of the Swedish Armed Forces Headquarters from 2005 to 2007. 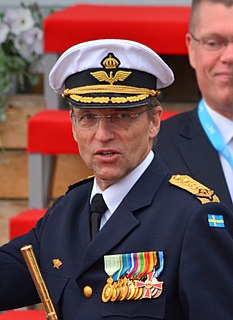 Lieutenant General Jan Ingvar Salestrand is a retired Swedish Air Force officer. Salestrand has served as Chief of Defence Staff, head of the Swedish Armed Forces Headquarters, head of the Swedish Armed Forces Special Forces and as the Commandant General in Stockholm. From 2014 to 2018, he served as State Secretary to the Minister for Defence Peter Hultqvist. Since 1 October 2018, Salestrand serves as Chief of His Majesty's Military Staff.

Vice Admiral Jonas Björnson Haggren is a senior officer in the Swedish Navy. He is currently serving as the Chief of Defence Staff and head of the Swedish Armed Forces Headquarters in Stockholm. 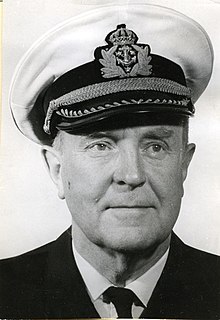 Lieutenant General Leif Michael Claesson is a Swedish Army officer. He served as the Chief of the Policy and Plans Department in the Defence Staff from 2018 to 2020. Claesson currently serves av Chief of Joint Operations.