The Hokkaido Utari Association is an umbrella group of which most Hokkaidō Ainu and some other Ainu are members. Originally controlled by the government with the intention of speeding Ainu assimilation and integration into the Japanese nation state, it now operates independently of the government and is run exclusively by Ainu.

The Japan Sumo Association is the body that operates and controls professional sumo wrestling in Japan under the jurisdiction of the Japanese Ministry of Education, Culture, Sports, Science and Technology (MEXT). Rikishi, gyōji (referees), tokoyama (hairdressers), and yobidashi (ushers/handymen), are all on the Association's payroll, but the organisation is run entirely by toshiyori (elders). The organization has its headquarters in Yokoami, Sumida, Tokyo. 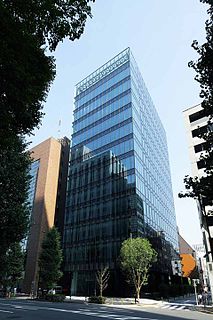 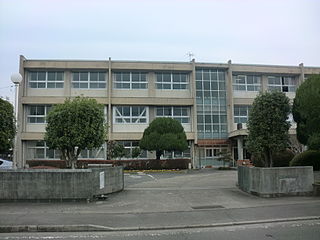 The Japan Electronic Industry Development Association was an industry research, development, and standards body for electronics in Japan. It was merged with EIAJ to form JEITA on November 1, 2000.

Camera & Imaging Products Association is a Japan-based organization set up in July 2002 to deal with technologies related to photography. Its members are engaged with the production of film-based and digital cameras, and other related equipment.

The Japan Professional Photographers Society is a Tokyo-based organization of photographers founded in 1950. Its logo reads “JPS”. It was formed from the combination of three earlier organizations, none more than two years old: Seinen Hōdō Shashin Kenkyūkai (青年報道写真研究会), Seinen Shashinka Kyōkai, and Shashinka Shūdan,

The Japan Newspaper Publishers and Editors Association (NSK) is an entirely independent and voluntary organization funded and operated by the mass media of Japan. The NSK was established on July 23, 1946. Its express purpose is to elevate ethical standards in reporting and protect and promote the media's common interests. The NSK has been criticized as limiting the foreign press, local Japanese media outlets, over-representing the large national newspapers, and monopolizing representation with government officials, especially in regards to censorship. 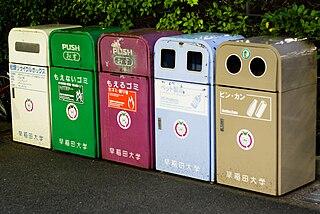 Recycling in Japan, an aspect of waste management in Japan, is based on the Japanese Container and Packaging Recycling Law. Plastic, paper, PET bottles, aluminium and glass are collected and recycled. Japan’s country profile in Waste Atlas shows that in 2012 Recycling Rate was 20.8%.

Japan Institute for Promotion of Digital Economy and Community is a nonprofit foundation for development of key IT technologies and policies, as related to the Ministry of Internal Affairs and Communications and Ministry of Economy, Trade and Industry (METI). The promotion of information processing by computers is JIPDEC's objective.

Japan Bowling Congress (JBC) is the major sanctioning body for the sport of ten-pin bowling in Japan. The JBC sanctions tournaments and other functions related to amateur bowling for both men and women. The current president of the JBC is Tsutomu Takebe. The JBC was established during the 1964 Summer Olympics in Tokyo. Its headquarters is in Shiba, Minato, Tokyo.

Elmo is a Japanese electronics and optics company that produces CCTV equipment, projectors, and other presentation devices. They are also well known for their series of high-end Super 8mm projectors during the 1970s.