The Japan International Cooperation Agency (独立行政法人国際協力機構, dokuritsu gyōseihōjin kokusai kyōryoku kikō, JICA) is a governmental agency that delivers the bulk of Official Development Assistance (ODA) for the government of Japan. It is chartered with assisting economic and social growth in developing countries, and the promotion of international cooperation. The OECD’s Development Assistance Committee published a peer review of Japan’s development co-operation in October 2020. [1] It has been led by Professor Shinichi Kitaoka, the former President of the International University of Japan, since 2015.

JICA's predecessor, the previous Japan International Cooperation Agency (also known as "JICA"), was a semigovernmental organization under the jurisdiction of the Ministry of Foreign Affairs, formed in 1974. The new JICA was formed on October 1, 2003. A major component of the comprehensive overhaul of Japan's ODA decided by the National Diet on November, 2006, is that the merger in 2008 will be between JICA and that part of the Japan Bank for International Cooperation (JBIC) which currently extends concessional loans to developing countries.

Since its completion on 1 October 2008, the new JICA has become one of the largest bilateral development organizations in the world with a network of 97 overseas offices, projects in more than 150 countries, and available financial resources of approximately 1 trillion yen ($8.5 billion). The reorganized agency is also responsible for administering part of Japan's grant aid which is currently under the jurisdiction of the Ministry of Foreign Affairs and so all three major ODA components—technical cooperation, grant aid, and concessional loans—are now managed "under one roof." The new JICA will also strengthen research and training capacity in the years ahead, acting as a kind of ODA think tank, contributing to global development strategies, strengthening collaboration with international institutions, and being better able to communicate Japan's position on major development and aid issues.

The forthcoming changes will be an extension of a series of JICA reforms which began in October 2003 when it became administratively independent. The organization's domestic establishments including international centers where JICA helps train some 8,000 foreign public officials, researchers, engineers, instructors and community leaders annually in Japan are being streamlined. The organization is also undergoing operational and organizational change in its country offices. Greater emphasis is being placed on a field-based approach to programs/projects, decentralizing staff, and delegating increased authority from Tokyo headquarters to overseas offices, reducing bureaucracy, and fast tracking programs/projects.

An increasing number of JICA programs/projects focus on what JICA's President, Mrs. Sadako Ogata describes as providing "human security". The recently developed concept of "human security" will empower local communities to have a greater say in their own futures by strengthening grassroots programs, such as improving education and health projects.

"We, as a bridge between the people of Japan and developing countries, will advance international cooperation through the sharing of knowledge and experience and will work to build a more peaceful and prosperous world."

Specialists dispatched to the field include those recommended from related government ministries and agencies as well as those applying through the specialist registration system. Assignments range from extended stays of over a year to shorter stays of less than one year.

JICA provides technical training for participants from the developing countries in a wide range of fields, including medical, industrial, and agricultural training.

JICA has its own accommodation facilities for participants of many of its programs. They are located in the important cities in Japan and are generally referred to as International Centers. The one at Tokyo is Tokyo International Center situated in Hatagaya, Shibuya. The facilities are of good quality and details are available in the JICA website.

Though the Ministry of Foreign Affairs (MOFA) is the government agency responsible for the conduct of foreign relations of Nepal, historically, it is the Office of Prime Minister (PMO) that has exercised the authority to formulate and conduct policies related to Nepal's foreign affairs. As a landlocked country wedged between two larger and far stronger powers, Nepal has tried to maintain good relations with both of its neighbors, People's Republic of China and Republic of India. However, its relationship with India, the country with greater hegemonic power over Nepal, has seen major ups and downs in recent years. The relationship between the two countries was significantly hampered during the 2015 Nepal blockade. Where the Nepal Government accused India of the blockade, India strictly denied the allegation and said the blockade were imposed by Madheshi protesters. For the most part though, Nepal has traditionally maintained a non-aligned policy and enjoys friendly relations with its neighboring countries and almost all the major countries of the world.

The United States Agency for International Development (USAID) is an independent agency of the United States federal government that is primarily responsible for administering civilian foreign aid and development assistance. With a budget of over $27 billion, USAID is one of the largest official aid agencies in the world and accounts for more than half of all U.S. foreign assistance—the highest in the world in absolute dollar terms.

Official development assistance (ODA) is a category used by the Development Assistance Committee (DAC) of the Organisation for Economic Co-operation and Development (OECD) to measure foreign aid. The DAC first adopted the concept in 1969. It is widely used as an indicator of international aid flow. It refers to material resources given by the governments of richer countries to promote the economic development of poorer countries and the welfare of their people. The donor government agency may disburse such resources to the government of the recipient country or through other organisations. Most ODA is in the form of grants, but some is measured as the concessional value in soft (low-interest) loans. 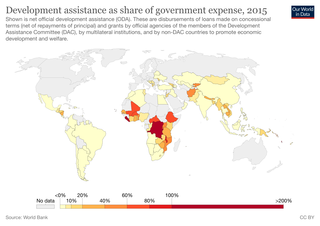 In international relations, aid is – from the perspective of governments – a voluntary transfer of resources from one country to another.

The Organisation for Economic Co-operation and Development's (OECD) Development Assistance Committee (DAC) is a forum to discuss issues surrounding aid, development and poverty reduction in developing countries. It describes itself as being the "venue and voice" of the world's major donor countries.

The Research Institute for Tropical Medicine is a health research facility based in Muntinlupa, Philippines. 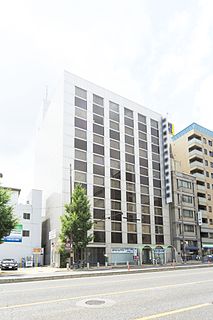 Fiji–South Korea relations refers to bilateral relations between Fiji and South Korea. The two countries established official diplomatic relations in January 1971, Korea having recognised Fiji's accession to independence the previous year. There is a South Korean embassy in Suva and a Fijian embassy in Seoul. Fiji opened its embassy in Seoul in July 2012 to "foster trade and investment" and to "promote people-to-people exchanges".

The Official Development Assistance is an arm of the Ministry of Foreign Affairs (Japan). The goal of the office is to help developing nations with supplies, civil engineering and other assistance. The ODA was started in 1954 after Japan signed the Colombo Plan, which pledges to provide aid to nations who need it. As of 2003, the ODA has provided over $221 billion USD to 185 nations and regions. The main institution that is managing Japanese ODA is Japan International Cooperation Agency.

The Korea International Cooperation Agency was established in 1991 by the Ministry of Foreign Affairs of South Korea as a governmental organization for Official Development Assistance (ODA) to enhance the effectiveness of South Korea's grant aid programs for developing countries by implementing the government's grant aid and technical cooperation programs. It is led by three-year-term president of the board who is appointed by the President upon the recommendation of Foreign Minister.

Japan Overseas Cooperation Volunteers is a system of dispatching Japanese volunteers overseas operated by Japan International Cooperation Agency (JICA). The program is similar to the U.S. Peace Corps, and includes volunteers in wide range of fields such as agriculture, forestry, fisheries, education, health, and more than 120 technical fields. More than 30,000 volunteers have ever been dispatched to more than 80 countries in Asia, Middle East, Africa, Central and South America, the Caribbean, and Oceania. The recruitment is held on April to May, and October to November every year. Japanese citizens aged from 20 to 39 are eligible for the application. It is commonly known by the acronym "JOCV".

Chinese foreign aid may be considered in this article as both governmental (official) and private development aid and humanitarian aid originating from China.

Irish Aid is the Government of Ireland's official international development aid programme. Irish Aid is managed by the Development Co-Operation and Africa Division (DCAD) of the Department of Foreign Affairs (DFA) . The Irish Government allocated €651 million to official development assistance (ODA) in 2017, mainly focused on overseas aid to reduce poverty and hunger, and to improve education, healthcare and governance in Africa, Asia, the Middle East and Latin America. The Irish Aid programme is an integral part of Ireland's foreign policy.