The Japan Meteorological Agency (気象庁, Kishō-chō), JMA, is an agency of the Ministry of Land, Infrastructure, Transport and Tourism. [4] It is charged with gathering and providing results for the public in Japan that are obtained from data based on daily scientific observation and research into natural phenomena in the fields of meteorology, hydrology, seismology and volcanology, among other related scientific fields. Its headquarters is located in Chiyoda, Tokyo.

JMA is responsible for gathering and reporting weather data and forecasts for the general public, as well as providing aviation and marine weather. JMA other responsibilities include issuing warnings for volcanic eruptions, and the nationwide issuance of earthquake warnings of the Earthquake Early Warning (EEW) system. JMA is also designated one of the Regional Specialized Meteorological Centers of the World Meteorological Organization (WMO). It is responsible for forecasting, naming, and distributing warnings for tropical cyclones in the Northwestern Pacific region, including the Celebes Sea, the Sulu Sea, the South China Sea, the East China Sea, the Yellow Sea, the Sea of Japan and the Sea of Okhotsk.

The JMA is responsible not only for gathering and reporting weather data and forecasts in Japan, but also for observation and warning of earthquakes, tsunamis, typhoons and volcanic eruptions. [7]

The agency has six regional administrative offices (including five DMOs and Okinawa Meteorological Observatory), four Marine Observatories, five auxiliary facilities, four Aviation Weather Service Centers and 47 local offices composed of the LMOs. These are also used to gather data, supplemented by weather satellites such as Himawari , and other research institutes. [7]

In 1968, the World Meteorological Organization (WMO) designated the JMA as a Regional Specialized Meteorological Centre (RSMC) for Asia. [8] In June 1988, the WMO also assigned the JMA as a RSMC for the Northwestern Pacific under its Tropical Cyclone programme. [8] In July 1989, the RSMC Tokyo – Typhoon Center was established within the headquarters office, which dealt with the forecasting and dissemination of active tropical cyclones, as well as preparing a summary of each year's cyclone activity. [9]

Each DMO and LMO issues weather forecasts and warnings or advisories to the general public live in its own area. Weather data used to these forecasts are acquired from the Surface Observation (represented by the AMeDAS), the Radar Observation, the Upper-air Observation and the Satellite Observation mainly using the Himawari series.

The Marine Observatories are seated in Hakodate, Maizuru, Kobe and Nagasaki. These stations observe ocean waves, tide levels, sea surface temperature and ocean current etc. in the Northwestern Pacific basin, as well as the Sea of Japan and the Sea of Okhotsk basin, and provide marine meteorological forecasts resulted from them, in cooperation with the Hydrographic and Oceanographic Department, Japan Coast Guard.

In 2005, in accordance with the ICAO's new CNS/ATM system, the Civil Aviation Bureau of the Ministry of Land, Infrastructure, Transport and Tourism set up the Air Traffic Management Center (ATMC) in Fukuoka, where the FIR is fixed. Along with this establishment, JMA placed the Air Traffic Meteorology Center (ATMetC) inside the ATMC.

In the Northwestern Pacific area, the typhoon season ordinarily comes almost from May to November. The JMA forecasts and warns or advises on tropical cyclones to the public in Japan and its surrounding countries as well because it also works as the RSMC Tokyo – Typhoon Center. [10]

The JMA has its own 624 observation stations across the country [11] that set up at intervals of 20 km approximately [12] in order to measure seismic intensity of earthquakes precisely. The agency also utilize about 2,900 more seismographs [11] owned by the National Research Institute for Earth Science and Disaster Prevention (NIED) and local governments. A 24-hour office has been housed within the JMA headquarters in Tokyo, for monitoring and tracking seismic events in the vicinity of Japan to collect and process their data, which issues observed earthquake's information on its hypocenter, magnitude, seismic intensity and possibility of tsunami occurrence after quakes quickly to the public through the Earthquake Phenomena Observation System (EPOS). [13] The Earthquake Early Warning (EEW) system began to work fully for the general public on October 1, 2007.

The agency is one of the representatives of the national Coordinating Committee for Earthquake Prediction. [14]

It is essential to provide coastal regions for tsunami information so that its catastrophic damages can be reduced and mitigated there. In case of there is a possibility of tsunami after an earthquake, JMA issues Tsunami Warning or Advisory for each region in Japan with information of estimated tsunami heights and arrival times within 2 to 3 minutes of the quake.

The agency set up four Volcanic Observations and Information Centers within DMOs in Sapporo, Sendai, Tokyo and Fukuoka. They are monitoring volcanic events on 110 active volcanos in Japan and 47 of these volcanos selected by the Coordinating Committee for Prediction of Volcanic Eruption are under the 24-hour observation with seismographs, accelerometers, GPS, air-shock recorders, fixed point observation cameras and other equipment. If it is predicted that a volcanic eruption will affect inhabited areas or are around a crater, Volcanic Warnings are issued and supplemented by Volcanic Alert Levels. 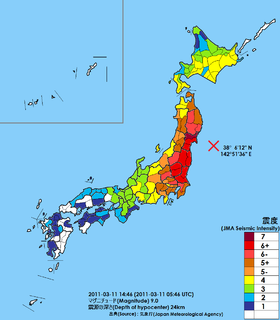 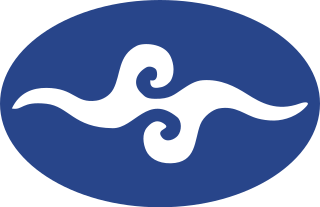 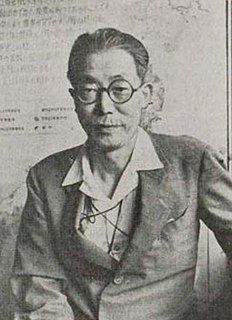 Sakuhei Fujiwhara was a Japanese meteorologist who became the namesake for the Fujiwhara effect. Novelist Jirō Nitta is his nephew and mathematician Masahiko Fujiwara is his grandnephew.

In Japan, an Earthquake Early Warning (EEW) is a warning issued when an earthquake is detected. The warnings are primarily issued by the Japan Meteorological Agency (JMA), with guidance on how to react to them. 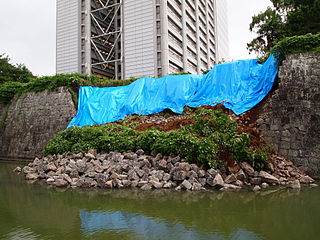 The 2009 Shizuoka earthquake occurred with a magnitude of 6.4 that hit Shizuoka Prefecture in the south of Honshū, Japan, on August 11 at 05:07 local time. 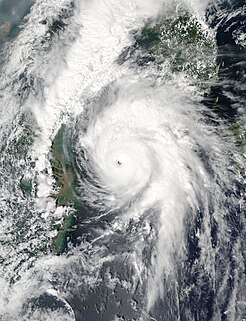 Typhoon Kompasu, known in the Philippines as Typhoon Glenda, was the strong tropical cyclone that moved along Okinawa, Japan and west coast of the Korean Peninsula before striking the Seoul Metropolitan Area in early-September 2010. It was the first significant system to directly strike the Seoul Metropolitan since Typhoon Prapiroon in 2000 and the strongest typhoon to directly impact the area since Tropical Storm Janis in 1995.

The 1993 southwest-off Hokkaido earthquake occurred at 13:17:12 UTC on 12 July 1993 in the Sea of Japan near the island of Hokkaido. It had a magnitude of 7.7 on the moment magnitude scale and a maximum felt intensity of VIII (Severe) on the Mercalli intensity scale. It triggered a major tsunami that caused deaths on Hokkaidō and in southeastern Russia, with a total of 230 fatalities recorded. The island of Okushiri was hardest hit, with 165 casualties from the earthquake, the tsunami and a large landslide. 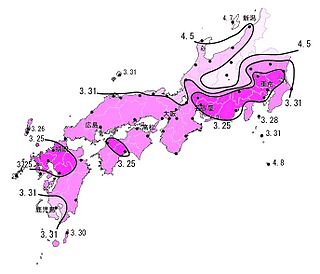 The cherry blossom front refers to the advance of the cherry blossoms across Japan. The Japan Meteorological Agency records the opening and full bloom of the blossoms from Kyūshū in late March to Hokkaidō in the middle of May. The advancing front is also the subject of regular reports by the major news agencies. The cherry blossom is of great public interest in Japan thanks to its symbolism and the custom of flower viewing known as hanami. 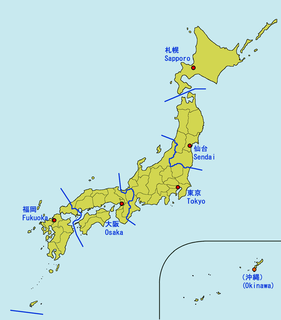 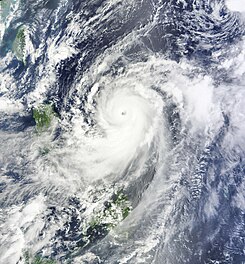 Typhoon Jelawat, known in the Philippines as Typhoon Lawin, was the most intense tropical cyclone of the 2012 Pacific typhoon season in terms of ten-minute maximum sustained winds, tied with Typhoon Sanba. Following Bolaven and Sanba, Jelawat was the third typhoon directly hitting Okinawa Island in 2012. Jelawat, which means carp in Malaysian, is a type of freshwater fish.

Typhoon Lekima was the second most intense tropical cyclone worldwide in 2013, as well as the twenty-ninth named storm and the eleventh typhoon of the annual typhoon season. It developed into a tropical storm late on October 20. After Lekima intensified into a typhoon and underwent rapid deepening in a very favorable environment on October 22, the system reached peak intensity on the following day. Maintaining its strength for over one day, Lekima began to weaken on October 24, as stronger vertical wind shear and mid-latitude westerlies began to make the typhoon significantly decay. On October 26, Lekima transitioned into an extratropical cyclone east of Japan.

Typhoon Neoguri, known in the Philippines as Typhoon Florita, was a large and powerful tropical cyclone which mainly struck Japan in 2014. The eighth named storm and the second typhoon of the annual typhoon season, Neoguri developed into a tropical storm on July 3 and then a typhoon on July 4. It rapidly deepened on July 5, reaching peak intensity late on July 6. Neoguri began to decay on July 7 and passed through Okinawa on July 8 and then making landfall over Kyushu as a severe tropical storm late on July 9. After Neoguri passed through the southern coast of Honshū on July 10, it became extratropical on July 11.

Typhoon Phanfone, known in the Philippines as Typhoon Neneng, was a powerful tropical cyclone which affected Japan in early October 2014. It was the eighteenth named storm and the eighth typhoon of the 2014 Pacific typhoon season. 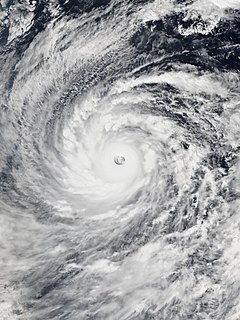 Typhoon Vongfong, known in the Philippines as Typhoon Ompong, was the most intense tropical cyclone worldwide in 2014, and struck Japan as a large tropical system. It also indirectly affected the Philippines and Taiwan. Vongfong was the nineteenth named storm and the ninth typhoon of the 2014 Pacific typhoon season. Estimates assess damage from Typhoon Vongfong to have been over US$160 million, mainly for striking mainland Japan. At least 9 people were killed along the path of the typhoon in those countries. 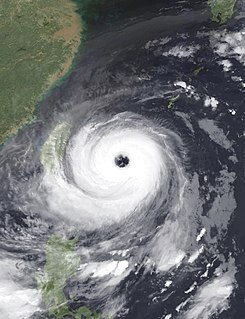 Typhoon Dujuan, known in the Philippines as Typhoon Jenny, was the second most intense tropical cyclone of the Northwest Pacific Ocean in 2015 in terms of ten-minute maximum sustained winds, tied with Noul. The twenty-first named storm and the thirteenth typhoon of the 2015 Pacific typhoon season, Dujuan brought extremely powerful winds throughout the Yaeyama Islands and Taiwan in late September, causing 3 deaths in Taiwan. The typhoon also caused over ¥2.5 billion (US$392.9 million) damage in East China.

An earthquake measuring 6.6 MW on the moment magnitude scale struck Iburi Subprefecture in southern Hokkaido, Japan, on 6 September 2018 at 3:08 a.m. Japan Standard Time. The earthquake's epicenter was near Tomakomai and occurred at a depth of 35.0 kilometers (21.7 mi). The Japan Meteorological Agency (JMA) registered a magnitude of 6.7 Mj and a maximum intensity of 7 on the shindo scale. Shaking from the earthquake was felt strongly in Hokkaido and Aomori Prefecture, and shaking was felt as far away as the Kantō region. Long period ground motion (LPGM) during the earthquake reached maximum of class 4 on the JMA LPGM intensity scales. The earthquake disrupted electrical service throughout Hokkaido, leaving 5.3 million residents without power. Forty-one people were confirmed dead and six hundred and ninety-one were injured. The event is officially known as Heisei san-jū-nen Hokkaidō Iburi tōbu jishin.