A section of National Route 57 in the city of Taketa in Ōita Prefecture is a musical road. [3]

Isahaya is a city located in Nagasaki Prefecture, Japan. The city was founded on September 1, 1940.

Kokonoe is a small town located in Kusu District, Ōita Prefecture, Japan. It promotes its nine onsen, which are occasionally closed due to flooding; it is also the summer headquarters of Labo Camp Kujū, part of the LABO language program. 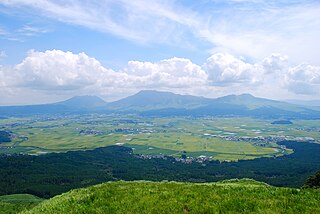 Aso Kujū National Park is a national park in Kumamoto and Ōita Prefectures, Japan. The park derives its name from Mount Aso, the largest active volcano in Japan, and the Kujū mountains. 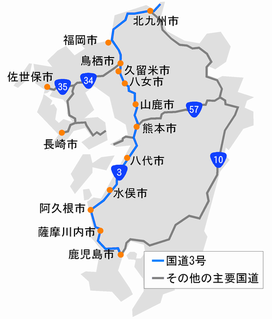 National Route 3 is a major highway on the island of Kyūshū in Japan. It connects the prefectural capital cities of Kagoshima (Kagoshima Prefecture, Kumamoto, and Fukuoka, passing through Kurume as well. 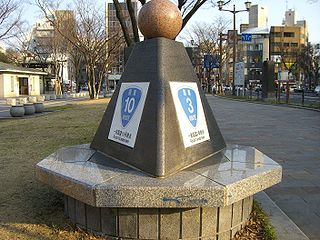 National Route 10 is a Japanese highway on the island of Kyūshū. It originates at the intersection with Route 2 in Kitakyushu, Fukuoka and passes through the prefectural capitals of Ōita and Miyazaki, terminating at the intersection with Route 3 in Kagoshima. Route 10 follows the eastern coast along the Inland Sea and the Sea of Hyūga. For much of its length, it parallels the JR Kyushu Nippo Main Line. Route 10 measures 454.8 km in length.

National Route 207 is a highway in Japan on the island of Kyūshū which runs from Saga City in Saga Prefecture to Togitsu in Nagasaki Prefecture. From Kōhoku it runs along the Ariake Sea towards Isahaya. Hence, that portion of the road runs mostly parallel to the Nagasaki Main Line.

The Ariake Sea is a body of salt water surrounded by Fukuoka, Saga, Nagasaki, and Kumamoto Prefectures, all of which lie on the island of Kyūshū in Japan. It is the largest bay in Kyūshū. Its deepest point is only about 50 meters deep, and extreme tides exceed 4 meters (13 ft), covering roughly 1,700 square kilometres (660 sq mi). Isahaya Bay is a branch of the Ariake Sea. Across the Amakusa Islands lies the Yatsushiro Sea.

National Route 34 is a highway in Japan on the island of Kyūshū which runs from Saga City in Saga Prefecture to Nagasaki in Nagasaki Prefecture. It follows the old Nagasaki Kaidō, a road from the Edo period. About 10% of the route is 4 lanes or more, and the rest is two lanes.

The Shimabara Railway Line is a Japanese railway line connecting Isahaya Station, Isahaya and Shimabarakō. The line parallels the coast of Shimabara Peninsula, Nagasaki Prefecture. This is the only railway line of Shimabara Railway, while the company also operates buses and ships. The first section of the line opened in 1911. The former line between Shimabara-Gaikō and Kazusa had few passengers and closed on 1 April 2008. The line uses the older diesel-powered Kiha 20 type train which was developed in the mid-1950s. Because of the line's vintage trains which maintain the old Japanese National Railways colors of red and beige, it remains popular among train enthusiasts. This is the only railway on Kyushu outside the Fukuoka area that has remained privately throughout its history.

Shimabara Railway is a railway company in Nagasaki, Japan.

National Route 325 is a national highway of Japan connecting Kurume, Fukuoka, and Takachiho, Miyazaki, in Japan, with a total length of 138.5 km (86.06 mi).

National Route 501 is a national highway of Japan connecting between Omuta, Fukuoka and Uto, Kumamoto in Japan, with total length has 47.1 km (29.3 mi).

The 1792 Unzen earthquake and tsunami resulted from the volcanic activities of Mount Unzen on 21 May. This caused the collapse of the southern flank of the Mayuyama dome in front of Mount Unzen, resulting in a tremendous megatsunami, killing 15,000 people altogether. It was also called Shimabara erupted, Higo affected (島原大変肥後迷惑), since many people were killed by this tsunami in Higo. 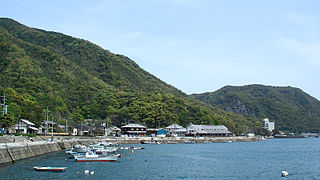 The Bungo Kaidō (豊後街道) was a route built during the Edo period in Japan. It started in Kumamoto, Higo Province, and stretched to Ōita, Bungo Province. There were six post stations along the route connecting to two cities.