The Japan PGA Championship (日本プロゴルフ選手権大会, Nihon purogorufu senshuken taikai) is a professional golf tournament on the Japan Golf Tour, and is one of the tour's four major championships. It was founded in 1926, making it one of the oldest professional tournaments in Japan, [1] and is played at a variety of courses throughout the country. The purse for the 2017 event was ¥150,000,000, with ¥30,000,000 going to the winner.

The NHK Cup (Go), or as it is more commonly known the NHK Cup TV Go Tournament, is a professional Go tournament organized by the Japan Go Association and sponsored by the Japan Broadcasting Corporation (NHK). The tournament lasts roughly one year from April to the following March. Tournament games are televised each Sunday from 12:30 to 14:00 (JST) on NHK Educational TV (NHK-E) and live commentary and analysis is provided by two commentators : A host (司会) who serves in that role for the entire tournament and a guest commentator (大盤解説者) to provide detailed analysis. Post-game analysis involving the two players and the two commentators takes place once the game has ended. This year (2019) marks the 67th time the tournament has been held and the host is Shiho Hoshiai 2P. Prior to 1963, the tournament was broadcast on the radio.

The Crowns is a professional golf tournament that is played over Nagoya Golf Club's Wagō Course in Tōgō, Aichi, Japan. Founded in 1960, it has been an event on the Japan Golf Tour schedule since the tour's first season in 1973.

The Japan LPGA Championship Konica Minolta Cup, is the one of the longest running tournament in the history of the Japan Ladies Professional Golf Association, surpassed only by Japan Women's Open. It is one of three majors on the LPGA of Japan Tour.

The Kansai Open Golf Championship is a professional golf tournament held in the Kansai region of Japan. Founded in 1926, one year before the Japan Open Golf Championship, it was the first professional tournament to be organised in Japan. It was an event on the Japan Golf Tour from 1973 to 1991 and has been back on the tour schedule since 2009. The 2019 event was the 85th edition.

The Barcelona Open was a professional golf tournament that was held in Barcelona, Catalonia, Spain. Founded as the Sanyo Open in 1981, it was an event on the European Tour from 1982 until 1988, after which it was replaced on the tour schedule by the Catalan Open. For the first two editions it was played at Club de Golf Sant Cugat, and thereafter at Real Club de Golf El Prat.

The Investec Royal Swazi Open is a golf tournament on the Sunshine Tour. It was first played in 1971 and is played at the Royal Swazi Sun Country Club in the Ezulwini Valley, Eswatini. Since 2003, it has been played using a Modified Stableford System.

Hinako Shibuno is a Japanese professional golfer who won the 2019 Women's British Open. 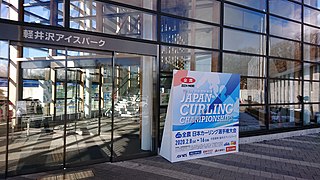 The 2020–21 Japan Figure Skating Championships were held in Nagano, Nagano from December 23–27, 2020. It was the 89th edition of the event. Medals were awarded in the disciplines of men's singles, ladies' singles, and ice dance. The results were part of the Japanese selection criteria for the 2021 World Championships.