The following players were selected to represent Japan at the 2018 Thomas & Uber Cup.

Kaori Mori is a former Japanese badminton player. She was the women's singles national champion in 2001 and 2003. Mori won the bronze medal at the 2004 Asian Championships and also the silver medals in 2005 and 2006. She played badminton at the 2004 Summer Olympics, defeating Anu Weckström of Finland in the first round but losing to Zhou Mi of China in the round of 16. She also helps the Japanese women's team to win bronze at the 2004 Uber Cup in Jakarta, Indonesia.

The Thomas Cup, sometimes called the World Men's Team Championships, is an international badminton competition among teams representing member nations of the Badminton World Federation (BWF), the sport's global governing body. The championships have been conducted every two years since the 1982 tournament, amended from being conducted every three years since the first tournament held in 1948–1949.

The Chinese National Badminton Team represents the [People's Republic of China]in international badminton team competitions and is controlled by the Chinese Badminton Association, the governing body for badminton in China. 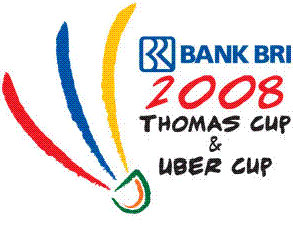 The 2008 Thomas & Uber Cup was the 25th tournament of the Thomas Cup and 22nd tournament of the Uber Cup, the men's and women's team competition in badminton, respectively. It was held in Jakarta, Indonesia, from May 11 to May 18, 2008.

The national badminton team of Thailand represents Thailand in international Badminton competitions. It is managed by the Badminton Association of Thailand (BAT).

The 2012 Thomas & Uber Cup was the 27th tournament of the Thomas Cup and 24th international badminton tournament of the Uber Cup. It was held from May 20–27, 2012 at the Wuhan Sports Center Stadium in Wuhan, China.

Renuga Veeran is an Australian badminton player. She has represented both Malaysia and Australia internationally as a badminton player. As part of the Australian Olympic Team, she paired with Leanne Choo and reached the quarter-finals in the women's doubles competition at the 2012 Summer Olympics.

Akane Yamaguchi is a Japanese badminton player from the Kumamoto Saishunkan team who specializes in singles play. She was the first Japanese player to hold the number 1 position in the BWF women's singles ranking.

The 2014 Thomas & Uber Cup was the 28th tournament of the Thomas Cup and 25th tournament of the Uber Cup, the badminton team championships for men and women respectively. It was held on 18–25 May 2014 at the Siri Fort Sports Complex in New Delhi, India. This is the first time India hosted the two cups.

Go Ah-ra is a Korean badminton player, specializing in doubles play. Go won 2013 Vietnam Open Grand Prix with her partner Yoo Hae-won, she and Yoo also won the bronze medal at the 2013 Badminton Asia Championships. In 2016, she won the silver medal at the 2016 Uber Cup with Korean women's badminton team.

The 2011 BWF Season was the overall badminton circuit organized by the Badminton World Federation (BWF) for the 2011 badminton season to publish and promote the sport. Besides the BWF World Championships, BWF promotes the sport of badminton through an extensive worldwide programme of events in four structure levels. They were the individual tournaments called Super Series, Grand Prix Events, International Challenge and International Series. Besides the individual tournaments, team wvents such as Thomas & Uber Cup, Sudirman Cup and Suhadinata Cup are held every other year.

The 2008 BWF Season was the overall badminton circuit organized by the Badminton World Federation (BWF) for the 2008 badminton season to publish and promote the sport. Besides the BWF World Championships, BWF promotes the sport of Badminton through an extensive worldwide program of events. These events have various purposes according to their level and territory in which they are held but those events owned by BWF seek to showcase the Sport via the widest possible quality television broadcast and build the fanbase of the Sport throughout the World.

An Se-young is a South Korean badminton player from Gwangju, who was awarded as 2019 Most Promising Player of the Year by the BWF. Korea’s News1 agency reported in 2017 that An Se Young is the first middle school student ever to qualify for Korea’s national badminton team. In 2018, she was selected to join the national team, became the first junior high school student in the Korean national team. She was part of the national junior team that clinched the mixed team title at the 2017 Asian Junior Championships. An later represented her country at the 2018 Uber Cup in Bangkok, and Asian Games in Jakarta, helps the team won a Uber Cup bronze. In 2019, she clinched the BWF World Tour title at the Super 300 New Zealand Open beat the 2012 Olympic gold medalists Li Xuerui of China in the final.