One of their greatest successes was at the 1964 Summer Olympics in Tokyo, when they defeated the heavily favored Soviet Union on the way to the gold medal.

Japan was qualified for the 2004 Summer Olympics by winning the Women's Olympic Qualifier that was held from 8 May to 16 May in Tokyo, Japan. In Athens, Greece the team took fifth place in the overall-rankings.

Finally after almost three decades of medal drought in the Olympics, Japan took home the Bronze medal by defeating South Korea in the 2012 Summer Olympics. [5]

Japan qualified for the 2012 Summer Olympics as the best Asian team in the 2012 FIVB Women's World Olympic Qualification Tournament. In the 2012 Olympics, Japan had been placed on Group A with Russian Federation, Italy, Dominican Republic, the host Great Britain and Algeria. Japan finished third in the Group. In the quarter-finals, Japan faced their old Asian rival China. Saori Kimura and Yukiko Ebata each scored 33 points in this thrilling game in which China were beaten by 3–2. [6] It was their first win over China in 11 years as far as FIVB games are concerned. On 9 August 2012, the Japanese were outplayed by the defending champions Brazil in the semi-finals. [7] On 11 August 2012, Japan beat South Korea 3–0 in the bronze medal match. It is the first Olympics' volleyball medal for the Japanese since the 1984 Summer Olympics. [8] On August 13, 2012, Japan Women's Team was ranked 3rd in the world behind United States women's national volleyball team and Brazil women's national volleyball team.

Japan was the host nation for the 2020 Summer Olympics. The other teams in their group in Tokyo were Kenya, Serbia, Brazil, Korea and the Dominican Republic. [9] Japan's opening match was be on 25 July 2021 in Tokyo against Kenya. [10] They beat Kenya in their first match in straight sets [11] and lost against Serbia, Brazil, Korea and the Dominican Republic which caused them to miss the qualification for the quarterfinals. [12]

Japan competed at the 2004 Summer Olympics in Athens, Greece, from 13 to 29 August 2004. Japanese athletes have competed at every Summer Olympic Games in the modern era since 1912 except for two editions; it was not invited to the 1948 Summer Olympics in London for its role in World War II, and was also part of the US-led boycott of the 1980 Summer Olympics in Moscow. The Japanese Olympic Committee sent a total of 306 athletes, 139 men and 167 women, to compete in 27 sports. For the first time in its Olympic history, Japan was represented by more female than male athletes. 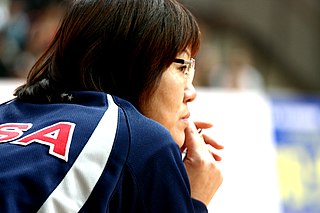 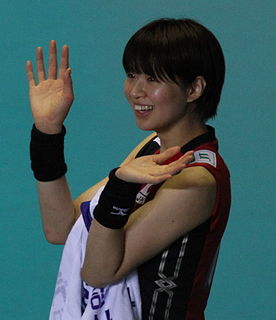 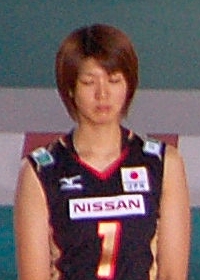 Megumi Kurihara is a Japanese volleyball former player who played for JT Marvelous. She also played for the All-Japan women's volleyball team and participated at the 2004 and 2008 Summer Olympics. Her nickname is "Princess Meg" (プリンセス・メグ).

The Cuba women's national volleyball team was the first team to break the USSR's and Japan's domination in the world women's volleyball by winning the 1978 World Women's Volleyball Championship.

The United States men's national volleyball team represents the country in international competitions and friendly matches. The team is governed by USA Volleyball. The team has won five Olympic medals, including three gold.

This article shows the rosters of all participating teams at the women's indoor volleyball tournament at the 2004 Summer Olympics in Athens.

The 2004 FIVB Women's World Olympic Qualification Tournament was a women's volleyball tournament to determine which four teams would compete in the women's event at the 2004 Athens Olympics. It was held on 8–16 May 2004 in Tokyo, Japan. The winning teams were  Japan,  South Korea,  Russia and  Italy.

Bernardo Rocha de Rezende, known as Bernardo Rezende and nicknamed Bernardinho, is a Brazilian volleyball coach and former player. He is the current coach of the female volleyball team Rio de Janeiro Vôlei Clube. Rezende is the most successful coach in the history of volleyball, accumulating more than 30 major titles in twenty-year career directing the Brazilian male and female teams.

Japan, represented by Japanese Olympic Committee, competed at the 2012 Summer Olympics in London, from 27 July to 12 August 2012. Despite being London's third Olympic games, Japan marked their London debut at this games. The nation also celebrated its centennial anniversary in the Olympics, having participated at every games since 1912 except for two editions; it was not invited to the 1948 Summer Olympics in London for its role in World War II, and was also part of the US-led boycott of the 1980 Summer Olympics in Moscow. Japan sent a total of 295 athletes to the Games, 138 men and 157 women, to compete in 24 sports.