Last updated June 18, 2021
For other uses, see Jarosław (disambiguation).
Not to be confused with Yaroslavl (inhabited locality).
Place in Subcarpathian Voivodeship, Poland

listen ); Ukrainian : Ярослав, romanized: Yaroslav, IPA:  [jɐroˈslɑu̯] ; Yiddish : יאַרעסלאָוו‎, romanized: Yareslov; German : Jaroslau) is a town in south-eastern Poland, with 38,970 inhabitants, as of 30 June 2014. [1] Situated in the Subcarpathian Voivodeship (since 1999), previously in Przemyśl Voivodeship (1975–1998), it is the capital of Jarosław County.

Jarosław is located in the territory of the old Polish tribe of Lendians. According to tradition, the town was established in 1031 by Yaroslav the Wise, after the area was annexed from Poland by the Kievan Rus', although the first confirmed mention of the town comes from 1152. The region was eventually regained by Poland, and the settlement was granted Magdeburg town rights by Polish Duke Władysław Opolczyk in 1375.

The city quickly developed as important trade centre and a port on the San river, reaching the period of its greatest prosperity in 16th and 17th century, with trade routes linking Silesia with Ruthenia and Gdańsk with Hungary coming through it and merchants from such distant countries as Spain, England, Finland, Armenia and Persia arriving at the annual three-week-long fair on the feast of the Assumption. In 1574 a Jesuit college was established in Jarosław. Jarosław was a private town of Polish nobility, including the Tarnowski, Jarosławski, Odrowąż, Kostka, Sieniawski, Zamoyski, Wiśniowiecki, Koniecpolski, Sobieski, Sanguszko and Czartoryski families. The Jarosławski family of Leliwa coat of arms hailed from the town.

In the 1590s Tatars from the Ottoman Empire pillaged the surrounding countryside. (See Moldavian Magnate Wars, The Magnate Wars (1593–1617), Causes.) They were unable to overcome the city's fortifications, but their raids started to diminish the city's economic strength and importance. Outbreaks of bubonic plague in the 1620s and the Swedish Deluge in 1655–60 further undermined its prominence. In March 1656, the Poles led by Polish national hero Stefan Czarniecki defeated the invading Swedes under King Charles X Gustav in the Battle of Jarosław. In the Great Northern War of 1700-21 the region was repeatedly pillaged by Russian, Saxon and Swedish armies, causing the city to decline further.

In the mid-eighteenth century, Roman Catholics constituted 53.7% of the population, members of the Greek Catholic Church 23.9%, and Jews 22.3%. [2]

Jarosław was under Austrian rule from the First Partition of Poland in 1772 until Poland regained independence in 1918. In the interbellum it was administratively located in the Polish Lwów Voivodeship.

During the German invasion of Poland which started World War II in September 1939, it was the site of the Battle of Jarosław, after which Germany captured the town. Shortly afterwards the German Einsatzgruppe I entered the town to commit various atrocities against the population. [3] Under German occupation, the town was part of the Kraków District of the General Government. [4] The Polish resistance movement was active in the town, and since May 1940, underground Polish newspaper Odwet was distributed in Jarosław. [5] In 1944, the town was captured by the Red Army and then restored to Poland, although with a Soviet-installed communist regime, which remained in power until the Fall of Communism in the 1980s. Some local Polish resistance officers were arrested by the Soviets and then imprisoned in a Soviet camp in Trzebuska. [6] The communists expelled most of Jarosław's Ukrainian population, at first to Soviet territories and later to territories regained from Germany.

The first Jews reportedly arrived in Jarosław in 1464. The first rabbi of Jarosław was Rabbi Nathan Neta Ashkenazi, in 1590. A year later, the new Council of Four Lands (Vaad Arba Aratzot) began convening in Jarosław, rotating the meeting with the city of Lwów (Lviv).

Until 1608 with a small Jewish community, religious facilities were not allowed. Still, Rabbi Solomon Efraim of Lontschitz (the author of "Kli Yakar"), a prominent and well known rabbi, lived here. By 1670 there was a large "government" synagogue created, although protested by the Christian community of the city. During attacks on the city by Tatars and Swedes, Jewish merchandise and sometimes homes were set on fire. In 1765, there were 1,884 Jews in the city and towns around it. A Jewish school was established sometime later. The famous rabbi Levi Isaac of Berdyczów (Berdychiv) studied in Jarosław circa 1760 and was called "the genius of Yeruslav". A fire in 1805 burnt down the old synagogue and a new one was established more according to tradition to replace it. The new synagogue was completed in 1811. A census taken in 1901 notes that Jews were 25% of the population: 5701 Jewish families.

In a story about Jacob Kranc told by Rabbi Jacob Orenstein around 1850, about the appointment of the Jarosław rabbi, Rabbi Orenstein had refused the appointment of Rabbi of Jarosław because it would be against his old uncle's appointment. The city council had already written his appointment and wished to express their sorrow for its cancellation. The Dubner Magid had just entered the city on a snowy winter day, and was taken directly to Orenstein's house, together with the city council, who happened to pass by him. But the walk up the steps was enough to create a moving speech, remembered years later, and accounted for in the book.

In 1921 the last rabbi was appointed, Rabbi Shmaiya HaLevi Steinberg. He wrote a book about the Jews of his town, and in the 1930s sent two copies to the National Hebrew Library in Jerusalem. These copies are the only surviving copies of the book after the Holocaust.

In September 1939, Jarosław was captured by Germans. Most of the Jews crossed the San river to the Soviet-occupied part of Poland and hid in the Carpathian mountains, including the elder rabbi and his family. Those that stayed were shot and killed by the German soldiers.

Jarosław is a town with a long sports history. In 1889, a branch of the "Sokół" Polish Gymnastic Society was founded in Jarosław. Nowadays, the town's most notable sports club are:

Jarosław is twinned with: [8]

Płock is a city in central Poland, on the Vistula river. It is in the Masovian Voivodeship, having previously been the capital of the Płock Voivodeship (1975–1998). According to the data provided by GUS on 31 December 2019 there were 119,425 inhabitants in the city. Its full ceremonial name, according to the preamble to the City Statute, is Stołeczne Książęce Miasto Płock. It is used in ceremonial documents as well as for preserving an old tradition.

Łomża, in English known as Lomza, is a city in north-eastern Poland, approximately 150 kilometers to the north-east of Warsaw and 80 kilometres (50 mi) west of Białystok. It is situated alongside the Narew river as part of the Podlaskie Voivodeship since 1999. Previously, it was the capital of the Łomża Voivodeship from 1975 to 1998. It is the capital of Łomża County and has been the seat of the Roman Catholic Diocese of Łomża since 1925. 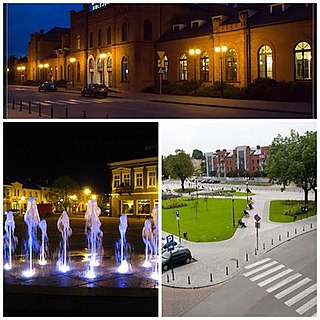 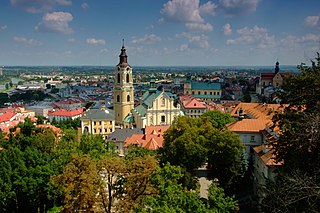 Przemyśl is a city in southeastern Poland with 60,442 inhabitants, as of June 2020. In 1999, it became part of the Subcarpathian Voivodeship; it was previously the capital of Przemyśl Voivodeship.

Września is a town in west-central Poland with 28,600 inhabitants (1995). It is situated in the Września County, Greater Poland Voivodeship, previously in Poznań Voivodeship (1975–1998), on the Wrześnica River.

Olkusz is a town in southern Poland with 36,607 inhabitants (2014). Situated in the Lesser Poland Voivodeship, previously in Katowice Voivodeship (1975–1998), it is the capital of Olkusz County. Olkusz is known for its abundance of silver, which is mined and extracted in the vicinity.

Końskie(listen) is a town in central Poland with 20,328 inhabitants (2008), situated in the Świętokrzyskie Voivodeship, previously in Kielce Voivodeship (1975–1998). Most of the town labour force was employed in the local foundry in the late 1980s and early 1990s. Since 1997 the town has developed into a major trade centre for small business. Historically, Końskie belongs to the province of Lesser Poland, and since its foundation, until 1795, it was part of Lesser Poland's Sandomierz Voivodeship.

Radymno is a town in south-eastern Poland with 5,543 inhabitants (02.06.2009). It has been part of the Podkarpackie Voivodeship since its creation in 1999. Radymno was previously in the Przemyśl Voivodeship from 1975–1998.

Leżajsk is a town in southeastern Poland with 13,871 inhabitants. It has been situated in the Subcarpathian Voivodship since 1999 and is the capital of Leżajsk County. 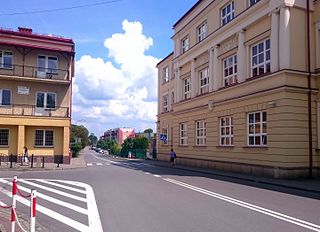 Niskopronounced [ˈɲiskɔ] is a town in Nisko County, Subcarpathian Voivodeship, Poland on the San River, with a population of 15,534 inhabitants as of 2 June 2009. Together with neighbouring city of Stalowa Wola, Nisko creates a small agglomeration. Nisko has been situated in the Subcarpathian Voivodship since 1999.

Wronki is a town in the Szamotuły County, western-central Poland, situated in the Greater Poland Voivodeship, previously in Piła Voivodeship (1975–1998). It is located close to the Warta River to the northwest of Poznań on the edge of Notec Forest, and has a population of approximately 11,000. 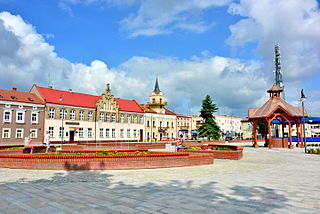 Lubaczów is a town in southeastern Poland, close to the border with Ukraine, with 12,567 inhabitants Situated in the Subcarpathian Voivodeship, it is the capital of Lubaczów County and is located 50 kilometres northeast of Przemyśl.

Łańcut is a town in south-eastern Poland, with 18,004 inhabitants, as of 2 June 2009. Situated in the Subcarpathian Voivodeship, it is the capital of Łańcut County.

Mikołów is a town in Silesia, in southern Poland, near the city of Katowice. It borders the Upper Silesian Metropolitan Union, a metropolis with a population of over 2 million, and is within a greater Silesian metropolitan area populated by about 5,294,000 people. The population of the town is 40,898 (2019). Located in the Silesian Highlands, on the Jamna stream, a tributary of the Kłodnica River and indirectly the Oder.

Kępno(listen) is a town in Poland. It lies on the outskirts of the Greater Poland Voivodeship, as it borders on Silesia and the Łódz Land. As of December 31, 2009 Kępno had a population of 14,760. One popular attraction in Kępno is the recently restored Rynek.

Kock is a town in eastern Poland, about 45 kilometres north of Lublin and 120 kilometres south-east of Warsaw. It lies in Lublin Voivodeship, in Lubartów County. It is the capital of the administrative district Gmina Kock. Historically Kock belongs to the Polish province of Lesser Poland and is located in its northeastern corner. As of 2004, its population numbered 3,509. 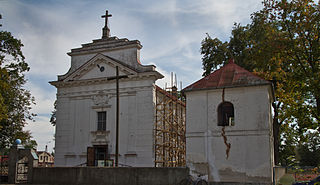 Krasnosielc is a village in Maków County, on the river Orzyc, in east-central Poland. It is the seat of the administrative district (gmina) called Gmina Krasnosielc. It lies approximately 18 kilometres (11 mi) north of Maków Mazowiecki and 90 km (56 mi) north of Warsaw. The village has a population of 1,300. 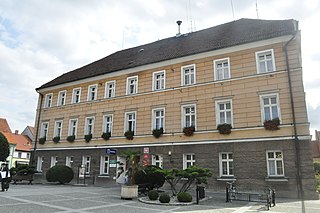 Pleszew is a town in Poland, in Greater Poland Voivodeship, about 90 km southeast of Poznań. It is the capital of Pleszew County. Population is 17,892 (2004).