Jean-Antoine Marbot, also known to contemporaries as Antoine Marbot (Pronunciation: /mɑːrˈboʊ/ mahr-BOH, French:  [ʒɑ̃ ɑ̃twan maʁbo] ; 7 December 1754 – 19 April 1800), was a French general and politician. He belongs to a family that has distinguished itself particularly in the career of arms, giving three generals to France in less than 50 years.

Jean-Antoine Marbot was born into a family of military nobility in Altillac, in the ancient province of Quercy in southwestern France. His career began in the Military household of the king of France in Versailles, where he joined the cavalry unit of the royal Gardes du Corps of King Louis XV, with the rank of second lieutenant. In 1781 he was promoted to the rank of captain of the dragoons and became aide-de-camp to Lieutenant-Général de Schomberg, inspector general of the cavalry, in 1782. [1]

Following of the ideas of Enlightenment, he retired from military service at the beginning of the Revolution and returned to his properties in Altillac. He was elected administrator of the department of Corrèze in 1790 and then deputy of this department to the Legislative Assembly on 3 September 1791 with 206 votes out of 361, where he sat in the majority. On 5 April 1792, he presented a report on the finances of the state in front of the assembly, and proposed a national loan plan, the purpose of which was to reduce the number of assignats in circulation to 12 million, so that acquirers of national property would have to pay in metallic values. [2] [3]

War of the Pyrenées

He reentered military service during the War of the Pyrenées against Spain with the rank of captain of the mountain chasseurs. On 30 August 1793, he was promoted to the rank of brigadier general and fought with the Army of the Eastern Pyrenées, distinguishing himself during the capture of Spanish Cerdanya under the orders of General Dagobert de Fontenille. He then joined the Army of the Western Pyrenées from 1794 to 1795, where he was promoted to the rank of divisional general. He distinguished himself for valour and won numerous victories against the enemy forces, particularly on 12 August 1794 at Sainte-Engrâce and Olloqui, on 4 September 1794 at Lescun, on 24–25 November 1794 at Orthez, and on 12 May 1796 during the attack on enemy positions between Glossua and Elgoibar, where he made many prisoners. On 9 June 1795 he was dismissed for political motives by représentants en mission , special envoys of the National Convention, before being definitively reinstated on 13 June of the same year. [4]

On 15 October 1795, he was elected Deputy of Corrèze to the Council of Ancients, the upper house of French legislature during the French First Republic, with 121 votes out of 236. He became opposed to the Club de Clichy , which he accused of conspiring against the interest of the Republic and he subsequently approved the coup of 18 Fructidor (4 September 1797), engineered by Generals Napoleon Bonaparte and Pierre Augereau, the latter having been his protégé during the War of the Pyrenées. On 6 September 1797, he was elected president of the Council of Ancients. On 11 January 1798, he passed a proposal aiming to contain the uprising that was being ignited by émigrés in the county of Avignon, in the south of France. Re-elected president of the Council of Ancients on 19 June 1798, he delivered a commemorative speech during the celebrations of the 14th of July, and favoured decisive actions against the coalition powers at war with France. On 18 April 1799, he supported a bill for the conscription of two hundred thousand men for the army, opposing the system adopted by the Minister of the Interior, François de Neufchâteau. [2]

He was appointed military governor of Paris by the Minister of War, General Jean-Baptiste Bernadotte on 5 July 1799, replacing General Barthélemy Joubert at the head of the 17th Military Division stationed in Paris. After General Napoleon Bonaparte's return from the Egyptian campaign, he opposed the planned coup d'état , which was to overthrow the government of the Directory and replace it with a more autocratic Consulate. Its authors, led by Director Emmanuel Sieyès, and eventually joined by General Bonaparte, knew that they needed the support of the armed forces in Paris to pursue their scheme. Fearing its current commander's attachment to republican ideals, they offered him a new position in the leadership of the Army of Italy, which he accepted. After his resignation, the more favourable General François Lefebvre succeeded him as military governor of Paris. [5]

Shortly before the coup of 18 Brumaire (9 November 1799), he was sent as divisional general to the Army of Italy, which was then under the command of General Jean-Étienne Championnet. After his death, he obtained the command of the Army of Italy until the arrival of General André Masséna. He commanded one of the divisions of the French forces fighting in Liguria, and was stationed in the city of Savona. The heights of the city were the subject of numerous battles, especially on 6 and 13 April 1800, as the Austrian troops were trying to make their way to the city of Genoa. He soon fell ill and had to be transported to Genoa to receive medical treatment. He died on 19 April 1800, during the Austrian siege of Genoa as a result of his wounds and of typhus. He was accompanied by his son, then Second-lieutenant and later General Marcellin Marbot, who also took part in the siege and described his father's last moments in his famous Memoirs. [6]

His wife was related to François Certain de Canrobert, marshal of France during the Second French Empire. [1]

General Jean-Antoine Marbot is among the 660 personalities to whom Emperor Napoleon paid tribute for fighting and dying for France during the Napoleonic Wars. His name is inscribed on the western pillar, 34th column of the Arc de Triomphe in Paris. [7]

Corrèze is a department in south-western France, named after the river Corrèze which runs though it. Its capital is Tulle, and its most populated town is Brive-la-Gaillarde. 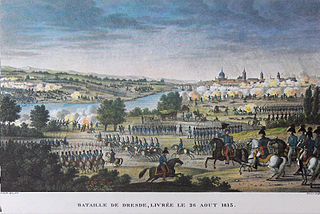 The Battle of Dresden was a major engagement of the Napoleonic Wars. The battle took place around the city of Dresden in modern-day Germany. With the recent addition of Austria, the Sixth Coalition felt emboldened in their quest to expel the French from Central Europe. Despite being heavily outnumbered, French forces under Napoleon scored a victory against the Allied army led by Field Marshal Schwarzenberg. However, Napoleon's victory did not lead to the collapse of the coalition, and the lack of effective French cavalry units, caused by a very heavy loss of French horses during the past 1812 French invasion of Russia, precluded a major pursuit. Three days after the battle, the Allies surrounded and captured a French corps at the Battle of Kulm. 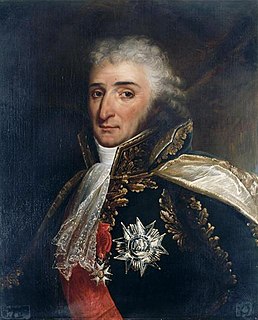 Charles Pierre François Augereau, 1st Duke of Castiglione was a soldier and general and Marshal of the Empire. After serving in the French Revolutionary Wars he earned rapid promotion while fighting against Spain and soon found himself a division commander under Napoleon Bonaparte in Italy. He fought in all of Bonaparte's battles of 1796 with great distinction. During the Napoleonic Wars, Emperor Napoleon entrusted him with important commands. His life ended under a cloud because of his poor timing in switching sides between Napoleon and King Louis XVIII of France. Napoleon wrote of Augereau that he "has plenty of character, courage, firmness, activity; is inured to war; is well liked by the soldiery; is fortunate in his operations." 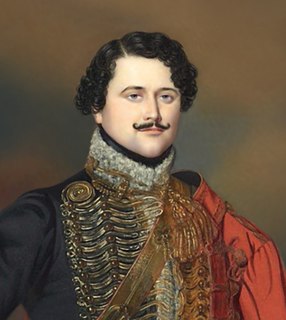 Jean-Baptiste Antoine Marcelin Marbot, known as Marcellin Marbot, was a French general, famous for his memoirs depicting the Napoleonic age of warfare. He belongs to a family that has distinguished itself particularly in the career of arms, giving three generals to France in less than 50 years. His elder brother, Antoine Adolphe Marcelin Marbot, was also a military man of some note. 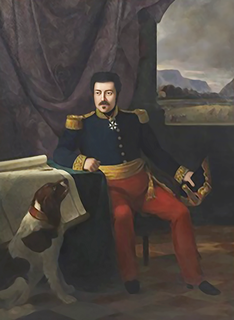 Antoine Adolphe Marcelin Marbot, known as Adolphe Marbot, was a French general. He belongs to a family that has distinguished itself particularly in the career of arms, giving three generals to France in less than 50 years.

The Marbot family originated from the ancient province of Quercy, near what is now the department of Corrèze in south-western France. It is of noble origin, although its members do not precede their names with any title. 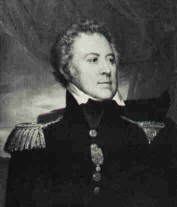 Altillac is a commune in the Corrèze department in the Nouvelle-Aquitaine region of central France.

Joseph de Mesko, Freiherr von Felsö-Kubiny was a cavalry general and lieutenant-general in Habsburg service during the French Revolutionary and Napoleonic wars. 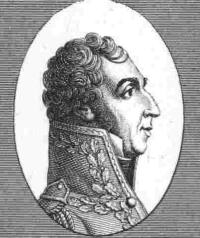 Claude Dallemagne started his career in the French army under the Bourbons, fought in the American Revolutionary War, rose in rank to become a general officer during the French Revolutionary Wars, took part in the 1796 Italian campaign under Napoleon Bonaparte, and held military posts during the Napoleonic Wars.

Joseph Marie Servan de Gerbey was a French general. During the Revolution he served twice as Minister of War and briefly led the Army of the Western Pyrenees. His surname is one of the names inscribed under the Arc de Triomphe, on Column 33.

Jean-Jacques Desvaux de Saint-Maurice, baron,, was a French general of the Napoleonic Wars. 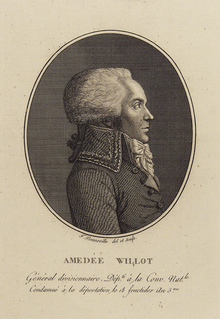 Antoine Noguès was a French Army general. He served in the Grande Armée as well as in the Hundred Days and the Waterloo Campaign.

Charles Hyacinthe Leclerc de Landremont was the commander in chief of the Rhine in 1793 during the French revolution. He was also a descendant of the painter Jean LeClerc.

Antoine Simon Durrieu was a French General and politician. He was born on 20 July 1775 in Grenade-sur-l'Adour (Landes) and died on 7 April 1862 in Saint-Sever (Landes).