Member of the legislature

Bertrand served as Member of the Legislative Assembly for the District of Missisquoi from 1948 until his death in 1973.

Member of the Cabinet

He served as Minister of Lands and Forestry from 1958 to 1960 and briefly as Minister of Youth and Social Welfare until his party, the Union Nationale lost the provincial election in 1960.

Bertrand tried to become leader of the Union Nationale in 1961, but was defeated by his colleague Daniel Johnson, Sr., the MLA for the district of Bagot.

In 1966, the Union Nationale was put back in office and Premier Daniel Johnson, Sr. appointed Bertrand to his Cabinet. Bertrand served both as Education Minister until 1967 and Minister of Justice until Johnson's sudden death from a heart attack in 1968. In addition to those assignments, Bertrand was also Johnson's Deputy Premier.

Bertrand was chosen interim Party Leader until a leadership convention could be held and therefore became Premier of Quebec.

His victory (58% of the delegates) over colleague Jean-Guy Cardinal (41%), Minister of Education and newly elected MLA for the district of Bagot, at the Leadership Convention of 1969, caused a deep division among party insiders. [1] While Johnson had been more accommodating towards the more nationalist elements of the party, Bertrand clearly positioned himself as a federalist. Cardinal was considered the nationalist candidate in the race. His defeat prompted a number of supporters to leave the Union Nationale and join the Parti Québécois.

The Union Nationale was also weakened by the passage of a controversial language legislation in 1969, known as Bill 63. Meant to resolve a conflict that plagued the public school board of Saint-Léonard, the bill confirmed the status quo on the language of instruction in the public schools (parents can choose English or French) [2] and angered Quebec nationalists. Two Union Nationale MLAs, Jérôme Proulx and Antonio Flamand crossed the floor and sat as Independents, along with Parti Québécois Leader René Lévesque and Liberal dissident Yves Michaud to protest against the new law.

Leader of the Official Opposition

The Union Nationale lost the 1970 election to Robert Bourassa's Liberals. While the party managed to obtain the status of Official Opposition, it finished third in the popular vote behind the PQ. The UN never significantly recovered from that defeat and no longer exists as a political party.

A year later, Bertrand resigned as Leader of the Union Nationale. In 1971, he received an honorary doctorate from Sir George Williams University, which later became Concordia University. [3] He died a few months before the 1973 election.

René Lévesque was a Canadian politician and journalist who served as the 23rd premier of Quebec from 1976 to 1985. Starting his career as a reporter, and radio and television host, he later became known for his eminent role in Quebec's nationalization of hydro, and as an ardent defender of Quebec sovereignty. He was the founder of the Parti Québécois, and before that, a Liberal minister in the Lesage government from 1960 to 1966 and the first Québécois political leader since Confederation to attempt, through a referendum, to negotiate the political independence of Quebec.

Pierre-Marc Johnson, is a Canadian lawyer, physician and politician. He was the 24th premier of Quebec from October 3 to December 12, 1985, making him the province's shortest-serving premier.

Francis Daniel Johnson Sr.,, was a Quebec politician and the 20th premier of Quebec from 1966 to his death in 1968.

This section of the Timeline of Quebec history concerns the events between the Quiet Revolution and the patriation of the British North America Act.

The 1985 Quebec general election was held on December 2, 1985, to elect members of the National Assembly of the Province of Quebec, Canada. The Quebec Liberal Party, led by former premier Robert Bourassa, defeated the incumbent Parti Québécois, led by Premier Pierre-Marc Johnson.

The 1976 Quebec general election was held on November 15, 1976 to elect members to National Assembly of the Province of Quebec, Canada. It was one of the most significant elections in Quebec history, rivalled only by the 1960 general election, and caused major repercussions in the rest of Canada. The Parti Québécois, led by René Lévesque, defeated the incumbent Quebec Liberal Party, led by Premier Robert Bourassa.

The 1970 Quebec general election was held on April 29, 1970, to elect members of the National Assembly of Quebec, Canada. The former Legislative Assembly had been renamed the "National Assembly" in 1968. The Quebec Liberal Party, led by Robert Bourassa, defeated the incumbent Union Nationale, led by Premier Jean-Jacques Bertrand.

Jacques-Yvan Morin, was professor of law and a politician in Quebec, Canada. Morin graduated from the McGill University Faculty of Law with a BCL in 1953, where he was the founder of the McGill Law Journal. He taught international and constitutional law at Université de Montréal from 1958 until 1973. He was deputy director of the Canadian Yearbook of International Law from 1963 to 1973 and founded the Quebec Journal of International Law in 1984. 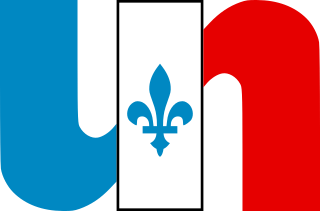 The 30th National Assembly of Quebec was the provincial legislature in Quebec, Canada that was elected in the 1973 Quebec general election. It sat for four sessions, from 22 November 1973 to 22 December 1973; from 14 March 1974 to 28 December 1974; from 18 March 1975 to 19 December 1975; and from 16 March 1976 to 18 October 1976. The governing Quebec Liberal Party was led by Premier Robert Bourassa; the Parti Québécois formed the official opposition for the first time, but since party leader René Lévesque did not have a seat, the leader of the opposition was Jacques-Yvan Morin.

Robert Burns was a politician, attorney and union activist from Quebec, Canada.

Jean-François Bertrand is a Canadian former politician in Quebec, Canada. Bertrand served in the National Assembly of Quebec.