Jean-Pierre Foucault (French pronunciation: ​ [ʒɑ̃ pjɛʁ fuko] ; born 23 November 1947 in Marseille) is a French television and radio host. He was born in Marseille, his mother was Jewish. He was the host of Qui Veut Gagner des Millions ? , the French version of Who Wants to Be a Millionaire? , and the host of Zone Rouge, the French version of The Chair . He has been hosting the Miss France pageant since 1996 and hosted the Miss Europe in 2003, 2005 & 2006 pageant.

Foucault played himself in the 2006 film Mon Meilleur Ami directed by Patrice Leconte and starring Dany Boon as a taxi driver who wins the top prize in Qui Veut Gagner des Millions? . Foucault shares his life with Evelyn Jarre without being married. He has a daughter from a previous marriage, Virginia Foucault. 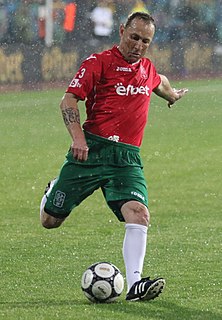 Jean-Pierre Roger Guillaume Papin is a French football manager and former professional player who played as a forward. He was named the Ballon d'Or and IFFHS World's Top Goal Scorer of the Year in 1991. Papin is the manager of Championnat National 2 club C'Chartres Football.

Alexandre "Sacha" Distel was a French singer, guitarist, and actor who had hits with a cover version of "Raindrops Keep Falling on My Head" in 1970, and reach No 10 in the UK Charts, "Scoubidou", and "The Good Life". He was made Chevalier (Knight) of the Légion d'honneur in 1997.

Élodie Gossuin is a French beauty pageant titleholder, model, radio and television presenter, columnist and regional politician. She was elected Miss Picardy 2000, Miss France 2001, and Miss Europe 2001. Since 2016, she has been the French voting spokesperson in the Eurovision Song Contest.

Qui veut gagner des millions ? is the French version of Who Wants to Be a Millionaire?, which originated in Great Britain on the ITV network. The aim of the game is to win the top prize of €1,000,000 by answering 12 multiple-choice questions correctly. It is broadcast on the TF1 network, and was hosted by Jean-Pierre Foucault from 2000 until 2019, then by Camille Combal.

Julien Lepers is a French television and radio presenter, and a singer-songwriter, born on 12 August 1949 in Paris. 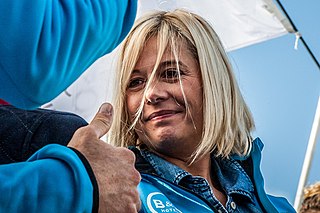 Flavie Flament is a French television and radio presenter.

Marine Lorphelin is a French model and beauty pageant titleholder who was crowned Miss France 2013 on 8 December 2012, representing the region of Burgundy and then represented France at Miss World 2013 and placed 1st runner up.

Elsa Fayer is a French radio and television presenter.

Marseille is the prefecture of the department of Bouches-du-Rhône and of the region of Provence-Alpes-Côte d'Azur in France, and is located in the Provence province. It is located on the coast of the Gulf of Lion, part of the Mediterranean Sea, near the mouth of the Rhône. Marseille is the second largest city in France, covering an area of 241 km2 (93 sq mi) and had a population of 870,018 in 2016. Its metropolitan area, which extends over 3,174 km2 (1,225 sq mi) is the third-largest in France after those of Paris and Lyon, with a population of 1,760,653 as of 2017, or 3,100,329 (2019) by the broader Eurostat definition of metropolitan region. Its inhabitants are called Marseillais.

Laurence Treil is a French model and actress. She was a famous fashion model who was also a Revlon spokesmodel during the 1980s, before becoming an actress, featuring in several films and television programmes. 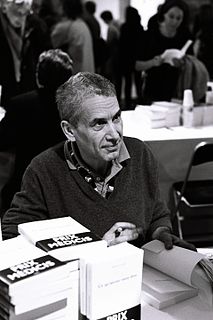 La France Insoumise is a democratic socialist, left-wing populist political party in France, launched on 10 February 2016 by Jean-Luc Mélenchon, then a Member of the European Parliament (MEP) and former co-president of the Left Party (PG). It aims to implement the ecosocialist programme L'Avenir en commun.

Miss France 2020, the 90th edition of the Miss France pageant, was held on 14 December 2019 at the Le Dôme de Marseille in Marseille. Vaimalama Chaves of Tahiti crowned her successor Clémence Botino of Guadeloupe by the end of the event. She will represent France at Miss Universe 2021. The competition was hosted by Jean-Pierre Foucault, Sylvie Tellier, and Miss France 2019 Vaimalama Chaves, with performances by Robbie Williams and Chaves. Footballer Amandine Henry served as the jury president.

Sandra Mayotte is a Creole Mauritian politician in the National Assembly of Mauritius, a former television presenter for the Mauritius Broadcasting Corporation and a renowned séga artist. 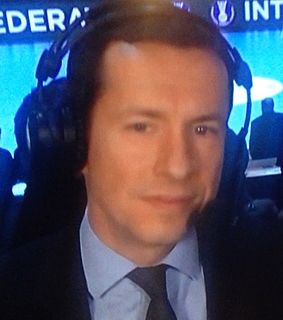 Grégoire Margotton is a French sports journalist who has worked for French television channels Canal+ and TF1. Since 2018, he has been the main presenter of the TF1 football programme Téléfoot.

Camille Combal is a French television and radio presenter. He is the current host of Danse avec les stars, Mask Singer, Qui veut gagner des millions ?, and Une famille en or. He was the co-host of Touche pas à mon poste ! for six seasons.