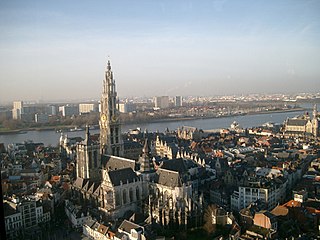 He played as a midfielder for Royal Antwerp FC, where he played 219 league games [1] and for the Belgium team. [2] He was named to the squad for the 1930 World Cup in Montevideo. 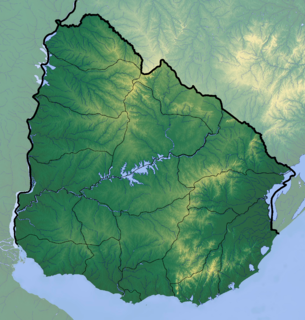 He was coach of the Great Old from 1949 to 1953, with the former goalkeeper for the club, Richard Gedopt.

Royal Antwerp Football Club, often simply referred to as Antwerp, is a Belgian football club based in the city of Antwerp.

Victor Mees, nicknamed Vic or Vicky, was a Belgian footballer who played all of his career at Royal Antwerp.

Julien Cools was a Belgian football player who won the Belgian Golden Shoe in 1977 while at Club Brugge. Discovered as a junior at SK Retie Branddonk of Antwerp and made his name with Beringen FC. Signed by FC Bruges in 1973 where his reputation for non-stop running in the midfield made him an international regular. Helped FC Bruges to the Belgian league titles in 1975-76,76-77 and 77-78 plus the Belgian Cup in 1977. In Europe Cools was a runner-up in the 1976 U.E.F.A.Cup Final and 1978 European Cup Final, Bruges losing both finals to Liverpool. Rated by World Soccer Magazine as Bruges` best player in that 1978 Final. At 32 Cools left Bruges to join Beerschot where he enjoyed a new lease of life, becoming Captain of the national team. At the 1980 European Championship in Italy Cools played in all four of Belgium's games including the Final where they lost to West Germany. He was capped 35 times and scored two goals for the Belgian national team. 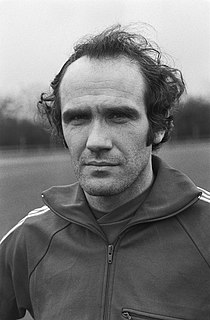 Wilfried van Moer is a former Belgian football player who won the Belgian Golden Shoe three times, first in 1966 while at Antwerp then in 1969 and in 1970 while at Standard Liège.

Louis Pilot was a Luxembourgian football player and manager.

Theodore Laurent Custers is a retired Belgian footballer who played as a goalkeeper.

Alfred Verdyck was a Belgian footballer.

Constant Joacim was a Belgian footballer.

Charles Simons was a Belgian footballer.

Corneel Neel Seys was a Belgian footballer. He was born in Anvers.

Miquel Delàs de Andres is a Spanish field hockey player who plays as a defender or midfielder for FC Barcelona and the Spanish national team.