Originally bent on a career in medicine, Gascon abandoned it for the stage after considerable work with amateur groups in Montreal. A scholarship in 1946 from the Government of France enabled him to study dramatic art in Paris. He studied with Ludmilla Pitoëff. [1]

After returning to Canada in 1951, he co-founded Montreal's Theatre du Nouveau Monde and became its first Artistic Director. During this time, he also started a long association with the newly established Stratford Festival in 1956, playing the Constable of France in Henry V and directing three farces by Moliere. [2] [1] He returned to Stratford to direct Le malade imaginaire in 1958 and Othello in 1959.

Between 1960 and 1963, he was founding Administrative Director of the National Theatre School of Canada [1] and was awarded the Canadian Drama Award, the Prix Victor Dore.

In 1963 he returned to Stratford to direct The Comedy of Errors , and then Le Bourgeois gentilhomme and The Marriage of Figaro the following season. He was awarded the Molson Prize in 1967. Then between 1968 and 1974, he was artistic director of Stratford Festival of Canada. [3] [4] [5] In 1977 he became theatre director of the National Arts Centre in Ottawa. [1]

Gascon's career in the Canadian theatre as a bilingual actor and director achieved an impressive reputation. He gained honorary degrees from McGill and Bishop's Universities. He was also awarded the Order of Canada (in 1975), the Prix du Québec and the Royal Bank Award. [1]

As an actor in both English and French languages, his credits include such noteworthy portrayals as Richard in Richard II, and the Captain in Dance of Death. [6]

He was the French/Indian Batise in the 1970 movie A Man Called Horse and was in a film in 1988 called À corps perdu (Straight for the Heart). [1]

He was the brother of actor Gabriel Gascon and filmmaker Gilles Gascon.

Gascon died of a heart attack in 1988 in Stratford, Ontario [1] and was entombed at the Notre Dame des Neiges Cemetery in Montreal. [7]

Pierre Bourgault was a politician and essayist, as well as an actor and journalist, from Quebec, Canada. He is most famous as a public speaker who advocated sovereignty for Quebec from Canada. 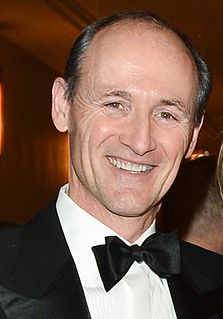 Colm Joseph Feore is a Canadian actor of film, stage, and television. A 13-year veteran of the Stratford Festival, he is known for his Gemini-winning turn as Prime Minister Pierre Trudeau in the CBC miniseries Trudeau (2002), his portrayal of Glenn Gould in Thirty Two Short Films About Glenn Gould (1993), and for playing Detective Martin Ward in Bon Cop, Bad Cop (2006) and its 2017 sequel. 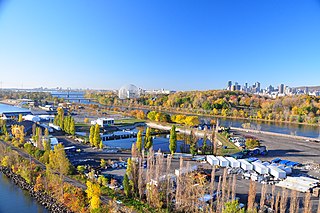 Notre Dame Island is an artificial island in the Saint Lawrence River in Montreal, Quebec, Canada. It is immediately to the west of Saint Helen's Island and west of the Saint Lawrence Seaway and the city of Saint-Lambert on the south shore. Together with Saint Helen's Island, it makes up Parc Jean-Drapeau, which forms part of the Hochelaga Archipelago. To the southwest, the island is connected to the embankment separating the seaway and Lachine Rapids.

Charles Doherty Gonthier, was a Puisne judge on the Supreme Court of Canada from February 1, 1989 to August 1, 2003. He was replaced by Morris Fish.

Paul David was a Canadian cardiologist, founder of the Montreal Heart Institute, and Senator. 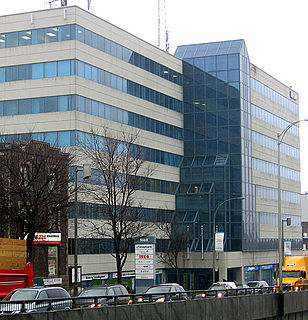 Yvette Brind'Amour, was a Canadian actress.

Gratien Gélinas, was a Canadian author, playwright, actor, director, producer and administrator who is considered one of the founders of modern Canadian theatre and film. 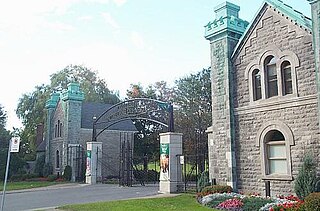 Notre Dame des Neiges Cemetery is a 343-acre (139 ha) rural cemetery located in the borough of Côte-des-Neiges-Notre-Dame-de-Grâce, Montreal, Quebec, Canada which was founded in 1854. The entrance and the grounds run along a part of Côte-des-Neiges Road and up the slopes of Mount Royal. Notre Dame des Neiges Cemetery is the largest cemetery in Canada and the third-largest in North America. 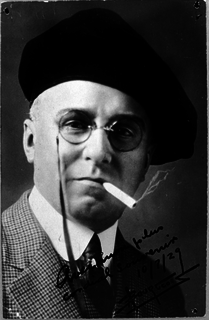 Albéric Bourgeois was a French-Canadian cartoonist, credited with creating the first continuing comic strip to use word balloons in Canada.

Jean Coutu was a Canadian actor. Born in Montreal, his career included many movies and TV series in Quebec, including episodes of La famille Plouffe in 1953. He also played in a Disney production Nikki, Wild Dog of the North, becoming one of the few Quebecers of his era to have appeared in Hollywood productions.

Jean-Paul Deschatelets, was a Canadian parliamentarian.

Robert Gravel was an actor, dramatist, theatrical director and teacher. 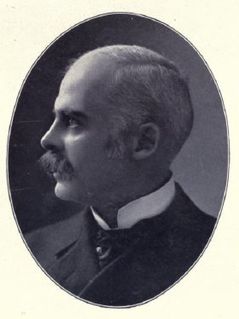 James John Edmund Guerin was a Canadian physician and politician.

Michel Beaulieu was a Quebec writer.

Luce Guilbeault was a Canadian actress and director from Quebec. She was one of the leading figures of Quebec repertory theatre of the 1960s and one of the most-sought actresses of Quebec cinema in the 1970s. She received a Canadian Film Award in 1975 and the first Prix Iris from the National Film Board of Canada in 1991 for her life's work.