Three sites interpret the Cajun culture of the Lafayette (southern Louisiana) area, which developed after Acadians were resettled in the region following their expulsion from Canada (1755–1764) by the British, and the transfer of French Louisiana to Spain in the aftermath of the French and Indian War.

The Barataria Preserve in Marrero interprets the natural and cultural history of the region. The preserve has trails and canoe tours through bottomland hardwood forests, swamps, and marsh. An Education Center provides curriculum-based programming for school groups and a visitor center with a film and exhibits. The 1,855 acres (751 ha) Barataria area comprises 63 contributing properties and was added as a historic district on October 15, 1966. [3] [4] [5]

Chalmette, Louisiana is six miles (10 km) southeast of New Orleans, the site of the Chalmette Battlefield and National Cemetery where the 1815 Battle of New Orleans took place. The national cemetery was established after the American Civil War and holds the remains of Civil War casualties and veterans, as well as the remains of soldiers from the Indian Wars of the late 19th century, the Spanish–American War, the First and Second World Wars, the Korean War, and the Vietnam War. There are few graves from the Battle of New Orleans.

A visitor center offers exhibits and information and is located near the battleground obelisk. Hurricane Katrina destroyed the visitor center in 2005, but a replacement has since been constructed.

The headquarters of Jean Lafitte National Historical Park and Preserve are located in New Orleans.

Chalmette Monument and Grounds were established on March 4, 1907, to commemorate the site of the Battle of New Orleans. It was transferred from the War Department to the National Park Service on August 10, 1933, and re-designated as Chalmette National Historical Park on August 10, 1939.

The Chalmette site and the Barataria Preserve were both listed on the National Register of Historic Places October 15, 1966. [3]

The Chalmette site was later incorporated into the multi-site Jean Lafitte National Historical Park and Preserve, which was authorized on November 10, 1978. 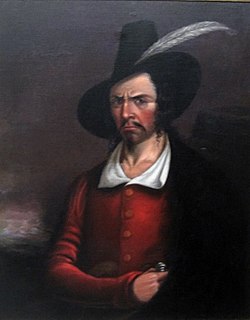 Jean Lafitte was a French pirate and privateer in the Gulf of Mexico in the early 19th century. He and his elder brother, Pierre, spelled their last name Laffite, but English-language documents of the time used "Lafitte". The latter has become the common spelling in the United States, including for places named after him. 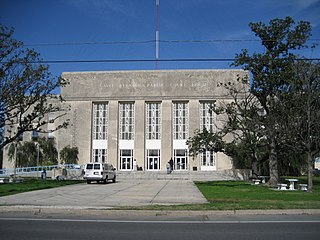 St. Bernard Parish is a parish located in the U.S. state of Louisiana. As of the 2010 census, the population was 35,897. The parish seat and largest community is Chalmette. The parish was formed in 1807.

Barataria is a census-designated place (CDP) in Jefferson Parish, Louisiana, United States. The population was 1,109 at the 2010 census. It is part of the New Orleans–Metairie–Kenner Metropolitan Statistical Area.

Chalmette is a census-designated place (CDP) in, and the parish seat of St. Bernard Parish, in southeast Louisiana, United States. The 2010 census reported that Chalmette had 16,751 people. The 2011 population is listed as 17,119; however, the pre-Katrina population was 32,069 at the 2000 census. The population hence declined by 46% between 2000 and 2010. Chalmette is part of the New Orleans–Metairie–Kenner Metropolitan Statistical Area. Chalmette is located east of downtown New Orleans and south of Arabi, towards Lake Borgne.

Barataria may refer to:

Saint Louis Cemetery is the name of three Roman Catholic cemeteries in New Orleans, Louisiana. Most of the graves are above-ground vaults constructed in the 18th and 19th centuries. 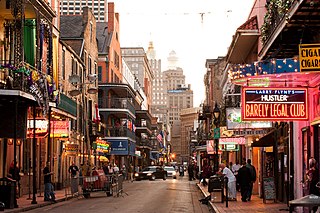 Bourbon Street is a historic street in the heart of the French Quarter of New Orleans. Extending thirteen blocks from Canal Street to Esplanade Avenue, Bourbon Street is famous for its many bars and strip clubs. 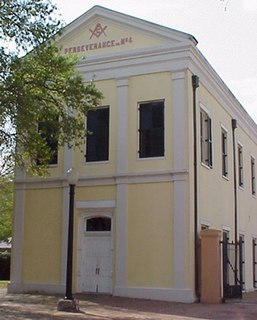 Lafitte's Blacksmith Shop is a historic structure at the corner of Bourbon Street and St. Philip Street in the French Quarter of New Orleans, Louisiana. Most likely built as a house in the 1770s during the Spanish colonial period, it is one of the oldest surviving structures in New Orleans.

Louisiana Highway 45 (LA 45) is a state highway located in Jefferson Parish, Louisiana. It runs 22.08 miles (35.53 km) in a north–south direction from a dead end at Bayou Barataria in Lafitte to a junction with LA 18 in Marrero.

Barataria Bay, also Barrataria Bay, is a bay of the Gulf of Mexico, about 15 miles (24 km) long and 12 miles (19 km) wide, in southeastern Louisiana, in Jefferson Parish and Plaquemines Parish, United States. It is separated from the gulf by two barrier islands, Grand Isle and Grand Terre.

Lafitte may refer to:

Pierre Lafitte (1770–1821) was a privateer in the Gulf of Mexico and smuggler in the early 19th century. He also ran a blacksmith shop in New Orleans, his legitimate business. Pierre was the historically less-well-known older brother of Jean Lafitte. While not as much of a sailor as his brother, he was the public face of the Lafitte operation, and was known for his wit and charm, in addition to his handling of the sale of smuggled goods. 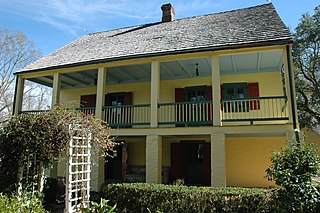 Longfellow-Evangeline State Historic Site, located in St. Martinville, Louisiana, showcases the cultural significance of the Bayou Teche region. It is the oldest state park site in Louisiana, founded in 1934 as the Longfellow-Evangeline State Commemorative Area. Evangeline was Henry Wadsworth Longfellow's enormously popular epic poem about Acadian lovers, who are now figures in local history. In the town center, the Evangeline Oak is the legendary meeting place of the two lovers, Evangeline and Gabriel. A statue of Evangeline marks her supposed grave next to St. Martin of Tours Church. The state historic site commemorates the broader historical setting of the poem in the Acadian and Creole culture of this region of Louisiana.

Renato Beluche was born in New Orleans, Louisiana, and died in Puerto Cabello, Venezuela. He was a Venezuelan merchant and privateer who played many roles in the turbulent world of the 19th-century Caribbean including that of merchant sea captain as well as being a successful privateer. With Luis Brion, he was Simon Bolivar’s favorite admiral as well as an active partner in the affairs of the Lafitte brothers, Jean and Pierre. He fought both as a revolutionary and as a defender against revolt, and was regarded as a patriot in the eyes of eight American nations, although England and France considered him a brigand.

Curtis Joseph Joubert, also known as J. Curtis Joubert, is a retired educator and Democratic politician of French ancestry from the U.S. state of Louisiana. He served as both a member of the Louisiana House of Representatives and as the mayor of Eunice in St. Landry Parish. 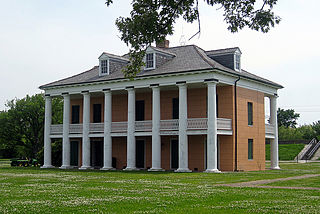 Rene Beauregard House, also known as the Malus-Beauregard House, is an 1830s porticoed mansion, an example of French-Louisiana architecture, overlooking the Battle of New Orleans battlefield. The house is named after its first and last owners and served as a country residence for several wealthy people during the 19th century.

The Percy-Lobdell Building is a historic warehouse located at 314 St. Mary Street in Thibodaux, Louisiana.