Jean Victor Tharreau or Jean Victor Thareau (15 January 1767, Bégrolles-en-Mauges – 26 September 1812), was a General of Division in the Army of the French Empire. [1]

Tharreau enthusiastically adopted the revolutionary cause and joined the Maine-et-Loire volunteers in 1792. He quickly rose through the command ranks. By 1795, he was chief of staff of the Army of the Ardennes. He helped to defend Zurich in the French army's defeat at the First Battle of Zurich in 1799, and participated in the French victory over the combined Austrian and Russian forces later that summer. After the successes of the 1809 campaign on the Danube, he was part of the jubilant force entering the Habsburg capital of Vienna.

In the 1812 campaign in Russia, he assumed command of the Westphalian army, appointed by Napoleon's brother Jérôme Bonaparte He died as the French Army took Moscow on 26 September 1812, of wounds suffered at the Battle of Borodino.

The Tharreau family originated in the Upper Poitou region of France and after the French Revolution it divided into two branches. One lived in Cholet and the other in Châtillon-sur-Sèvre. The family in Cholet had five sons: François, who served in the legislature as a deputy from Maine-et-Loire in 1808-1812; Augustin, who was a doctor; and a third who died young... The Châtillon branch also had five sons: Pierre-Jean-François, born 1755, who became a legislative deputy, and a jurist; Jean-Victor, who became a general in Napoleon's army; and a third who died young. [2] [3]

At the outbreak of the French Revolution, Tharreau enthusiastically adopted the revolutionary cause. In 1792, he joined the Maine-et-Loire volunteers and later that year he was an adjutant major of the 2nd battalion of volunteers of Mayence. In 1794, at the height of the French terror, he was a General of Brigade in the Army of the Ardennes. [4] In 1799, Jean Victor Tharreau was a brigade commander in the French Army of the Danube, and fought at the battles of Ostrach and First Stockach. [5] On 20 April, he was promoted to General of Division. André Masséna placed him command of the forward line, for the defense of the Swiss city of Zurich, in 1799; the insubordination of Jean-de-Dieu Soult at the Battle of Winterthur in May 1799 contributed to Tharreau's inability to hold the forward line, forcing a French retreat on Zurich and the subsequent defeat of the French at the First Battle of Zurich on 4–7 June. [6]

In 1801, he was appointed commandant of the city of Strasbourg. A firm believer in the revolutionary principles, he was dismayed by Napoleon's acquisition of absolute power, although he admired the man's military talents. [7] Napoleon made him a baron on 21 December 1808. [8] In 1809, he commanded the First Division of the II Corps of the Grande Armée, under general command of Marshal Lannes at the battles of Aspern-Essling and Wagram, [9] after which Napoleon made him an Officer of the Légion d’Honneur, on 10 August 1809. [10]

In 1812, he served as General of the 23rd Division, and later replaced Dominique Vandamme who commanded the 8th Army, after Vandamme's recklessness and rudeness had strained his relationship with Jérôme Bonaparte, King of Westphalia, beyond repair. [11] He participated in the Battle of Borodino, where he was mortally wounded. He died of his wounds on 26 September 1812. [12]

Tharreau's name is inscribed on the 11th column of the Arc de Triomphe, in Paris. [13] There is also a granite stone at the cemetery in the village of Orvault, in the Loire-Atlantique department of France, on which is inscribed:

To the memory of General of Division Baron Jean-Victor Tharreau, officer of the Legion of Honor, who died of wounds from the Battle of Moscow 7 September 1812.

In 1810, Tharreau had purchased property in Orvault, the so-called House Plaisance. His wife, Charlotte Martine, remained there until her death in 1850. [14] He had a son, Pierre-André. [15] 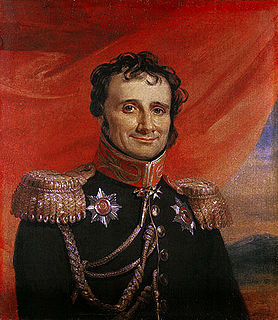 Antoine-Henri, Baron Jomini was a French-Swiss officer who served as a general in the French and later in the Russian service, and one of the most celebrated writers on the Napoleonic art of war. Jomini's ideas were a staple at military academies, the United States Military Academy at West Point being a prominent example; his theories were thought to have affected many officers who later served in the American Civil War. He may have coined the term logistics in his Summary of the Art of War (1838). 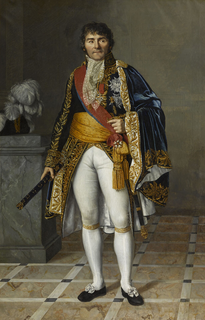 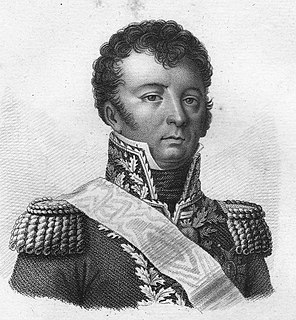 General Dominique-Joseph René Vandamme, Count of Unseburg was a French military officer, who fought in the Napoleonic Wars. He was a dedicated career soldier with a reputation as an excellent division and corps commander. However he had a nasty disposition that alienated his colleagues; he publicly criticized Napoleon, who never appointed him marshal. 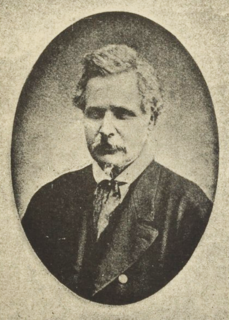 James Miln (1819–1881) was a Scottish antiquary who excavated many sites around the French village of Carnac in Brittany from around the 1860s. He worked on Roman military camps and other Roman antiquities including the Bosseno Roman villa, but is remembered today for his studies of the Carnac stones. These had long been the subject of myth, and from the 1720s various people showed increasing interest in these features, but Miln was one of the first to carry out extensive excavations of the stones.

The Battle of Kaiserslautern saw a Coalition army under Charles William Ferdinand, Duke of Brunswick-Wolfenbüttel oppose a Republican French army led by Lazare Hoche. Three days of conflict resulted in a victory by the Prussians and their Electoral Saxon allies as they turned back repeated French attacks. The War of the First Coalition combat was fought near the city of Kaiserslautern in the modern-day state of Rhineland-Palatinate, Germany, which is located about 60 kilometres (37 mi) west of Mannheim. 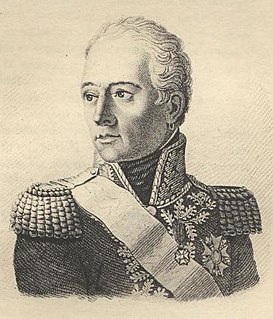 Louis Marie Turreau, also known as Turreau de Garambouville or Turreau de Linières, was a French general officer of the French Revolutionary Wars. He was most notable as the organisor of the colonnes infernales during the war in the Vendée, which massacred tens of thousands of Vendéens and ravaged the countryside. He attained army command, but without notable military accomplishments. Under the First French Empire, he pursued a career as a high functionary, becoming ambassador to the United States then a baron d'Empire.

The Army of the Danube was a field army of the French Directory in the 1799 southwestern campaign in the Upper Danube valley. It was formed on 2 March 1799 by the simple expedient of renaming the Army of Observation, which had been observing Austrian movements on the border between French First Republic and the Holy Roman Empire. It was commanded by General Jean-Baptiste Jourdan, 1st Comte Jourdan (1762–1833). 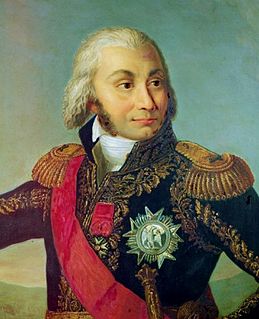 The Army of the Danube was a field army of the French First Republic. Originally named the Army of Observation, it was expanded with elements of the Army of Mainz (Mayence) and the Army of Helvetia (Switzerland). The army had three divisions plus an advance guard, a reserve, and an artillery park. The artillery park was under the command of Jean Ambroise Baston de Lariboisière and consisted of 33 cannons and 19 howitzers operated by 1,329 non-commissioned officers and cannoneers as well as 60 officers. There were approximately 25,000 members of the Army, the role of which was to invade southwestern Germany, precipitating the War of the Second Coalition. 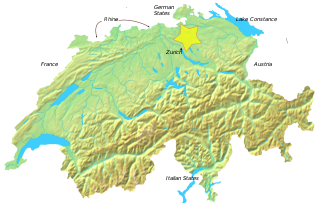 The Battle of Winterthur was an important action between elements of the Army of the Danube and elements of the Habsburg army, commanded by Friedrich Freiherr von Hotze, during the War of the Second Coalition, part of the French Revolutionary Wars. The small town of Winterthur lies 18 kilometers (11 mi) northeast of Zürich, in Switzerland. Because of its position at the junction of seven roads, the army that held the town controlled access to most of Switzerland and points crossing the Rhine into southern Germany. Although the forces involved were small, the ability of the Austrians to sustain their 11-hour assault on the French line resulted in the consolidation of three Austrian forces on the plateau north of Zürich, leading to the French defeat a few days later. 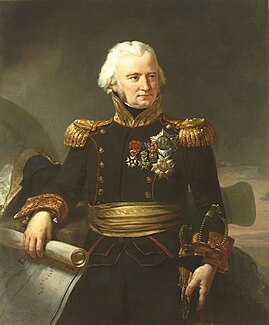 Jean Ambroise Baston de Lariboisière, also Count de Lariboisière, was a general of artillery of the First French Empire. He fought in the French Revolutionary Wars and the Napoleonic Wars and died of fatigue at Königsberg in East Prussia on 21 December 1812, during the Grand Army's retreat from Moscow.

Étienne Heudelet de Bierre joined the French army as a volunteer lieutenant in 1792. A year later he became a staff officer for a number of generals before becoming Laurent Gouvion Saint-Cyr's chief of staff in 1795. He fought under Jean Victor Marie Moreau in the 1796 campaign and fought at Kehl. He became a general officer in 1799, leading his troops at the First and Second Battles of Zurich. In April 1800 he was a brigade commander in Jean Victor Tharreau's division in Moreau's army. In December of that year he fought at Hohenlinden under Michel Ney.

Jean Guillaume Barthélemy Thomières was killed in action at Salamanca while commanding an Imperial French infantry division. He joined the army of the First French Republic in 1793 and fought the Spanish. He transferred to the Army of Italy in 1796 and was present at the battles of Dego, Mondovi, Lodi, Bassano, and Arcole. In 1800 he fought at Montebello and Marengo as an aide-de-camp to Claude Perrin Victor. 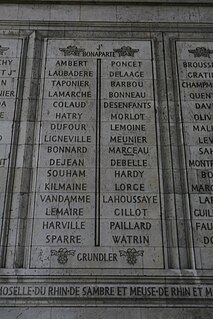 Alexandre Camille Taponier commanded an infantry division in several battles during the French Revolutionary Wars. He joined the French Royal Army in 1767. He became a chef de bataillon on 15 October 1793 and a general of division less than two months later on 7 November, a speed of promotion that is astonishing. He led his division at the end of 1793 in the battles of Kaiserslautern, Froeschwiller and Second Wissembourg.

The Château-Gaillard is a French hôtel particulier and an archaeological museum, built in the late Middle Ages in Vannes. 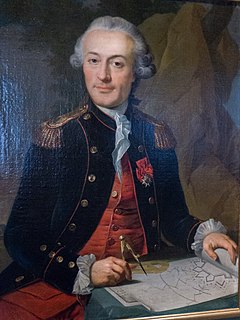 Jean Claude Eléonore Le Michaud d’Arçon was a French general, specializing in fortification. His designs include the forts at Pontarlier and Fort-Dauphin in Queyras. 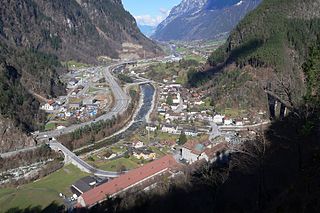 The Battle of Amsteg saw a Republican French division under General of Division Claude Lecourbe face a brigade of Habsburg Austrian soldiers led by General-major Joseph Anton von Simbschen. Lecourbe's offensive began on 14 August when six columns of French infantry advanced on the upper Reuss valley from the north and east. By 16 August, Lecourbe's forces had driven Simbschen's Austrians from the valley and seized control of the strategic Gotthard Pass between Italy and Switzerland.