During his career he played mostly for Royal Racing Club de Bruxelles. He won the gold medal at the 1920 Summer Olympics playing for Belgium national football team and, at 38 years of age, he was selected in the Belgian squad for the 1930 FIFA World Cup, although he never played a match at the tournament.

Rodolphe William Seeldrayers was a Belgian football administrator who was the fourth President of FIFA, serving from 1954 to 1955. He was actively involved in the official associations of Belgium sports. 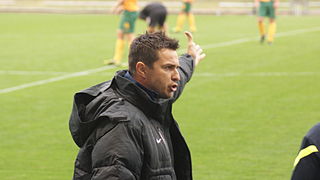 André Alves da Cruz is a Brazilian retired footballer who played as a central defender. He played for several clubs in Brazil and Europe, and also represented the Brazilian national team, taking part in the 1989 and 1995 Copa América tournaments, and the 1998 FIFA World Cup, as well as the 1987 Pan American Games and the 1988 Summer Olympics.

R. Olympic Charleroi Châtelet Farcienness, is a Belgian association football club from the city of Charleroi, Hainaut. As of 2019, they play in the Belgian First Amateur Division.

Maarten Martens is a retired Belgian professional footballer who plays as a midfielder, either as an attacking midfielder or winger, and currently is a free agent. Martens is known for his flair, dribbling and goalscoring ability as well as his precise passing and creativity. He previously played for Belgian clubs Anderlecht, RKC Waalwijk, AZ and Cercle Brugge, as well as Greek club PAOK. At international level, he has represented the Belgium national football team.

Sepp De Roover is a Belgian footballer who plays as a right back for KFC De Kempen.

Cvijan Milošević is a former Yugoslavian football player. He was capped once for the Yugoslav national team.

Charles Bunyan Sr. (1869–1922) was an English professional football player and manager active throughout Europe in the late-19th and early-20th centuries.

Maurice Taylor Bunyan was an English football player and manager active primarily in Belgium and France.

Fernand Wertz was a Belgian football coach and striker. He was born in Dolhain.

Charles Griffiths was an English football player and manager. He played in England, and coached in Belgium, France, Germany and the Netherlands in the early 20th century.