Jean de Ligne, Duke of Arenberg (c. 1525 – 1568) was Baron of Barbançon, founder of the House of Arenberg and stadtholder of the Dutch provinces of Friesland, Groningen, Drenthe and Overijssel from 1549 until his death.

He was the son of Louis de Ligne, Baron of Barbançon from the House of Ligne and Marie of Glymes, Lady of Zevenbergen (1503–1566), daughter of Cornelis of Glymes.

Jean de Ligne belonged to the closest circles around Charles V and was made a Knight in the Order of the Golden Fleece in 1546. In 1549 he became stadtholder of the Northern provinces of Friesland, Groningen, Drenthe and Overijssel. By his marriage to Marguerite de la Marck-Arenberg, sister of Robert III von der Marck-Arenberg who died without children, he became the founder of the third House of Arenberg.

He participated in the campaign in France and distinguished himself in the Battle of St. Quentin (1557) where he, together with Henry V, Duke of Brunswick-Lüneburg, led the left wing of the infantry in the final attack against the French.

At the start of the rebellion he distanced himself of his good friend William the Silent, Lamoral, Count of Egmont and Philip de Montmorency, Count of Hoorn, and remained loyal to the King Philip II of Spain.

He was unable to stop the spread of Protestantism in his Northern provinces, but succeeded in 1567 to keep them loyal to the Crown without bloodshed.

Back south, he joined the army under the Duke of Alva, but objected against the arrests of Egmont and Hoorn. When Louis and Adolf of Nassau (brothers of William I of Orange) invaded Groningen, he was sent back by Alva to repulse this army.

There he was killed in the Battle of Heiligerlee on 23 May 1568. Cardinal Granvelle described his death as a great loss for the Catholic faith and the King.

Arenberg was buried in the Saint Catherine Church in Zevenbergen, and his remains were moved in 1614 to the family vault in Enghien.

He had seven children, amongst whom: 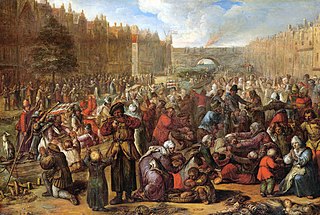 The Eighty Years' War or Dutch War of Independence (1568–1648) was a revolt of the Seventeen Provinces of what are today the Netherlands, Belgium, and Luxembourg against Philip II of Spain, the sovereign of the Habsburg Netherlands. After the initial stages, Philip II deployed his armies and regained control over most of the rebelling provinces. Under the leadership of the exiled William the Silent, the northern provinces continued their resistance. They eventually were able to oust the Habsburg armies, and in 1581 they established the Republic of the Seven United Netherlands. The war continued in other areas, although the heartland of the republic was no longer threatened. This included the origins of the Dutch colonial empire, which began with Dutch attacks on Portugal's overseas territories, which at the time was conceived as carrying overseas the war with Spain due to Portugal being in a dynastic union with Spain. The Dutch Republic was recognized by Spain and the major European powers in 1609 at the start of the Twelve Years' Truce. Hostilities broke out again around 1619, as part of the broader Thirty Years' War. An end was reached in 1648 with the Peace of Münster, when the Dutch Republic was definitively recognised as an independent country no longer part of the Holy Roman Empire. The Peace of Münster is sometimes considered the beginning of the Dutch Golden Age.

Philip de Montmorency, also known as Count of Horn or Hoorne or Hoorn, was a victim of the Inquisition in the Spanish Netherlands. 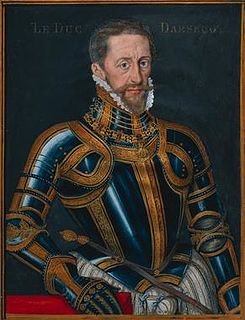 Philippe de Croÿ, 3rd Duke of Aarschot, 4th Prince of Chimay, Count of Porcean, was stadtholder of Flanders, and inherited the estates of the ancient and wealthy family of Croÿ. Becoming a soldier, he was made a Knight of the Order of the Golden Fleece by Philip II, king of Spain, and was afterwards employed in diplomatic work.

George de Lalaing count Rennenberg, was stadtholder of Friesland, Groningen, Drenthe and Overijssel in the service of Philip II of Spain from 1577 to 1581. The Lalaing family came from Hainaut and had a tradition of governing. His father was Philip de Lalaing, count of Hoogstraten; his mother, Anna of Rennenberg. 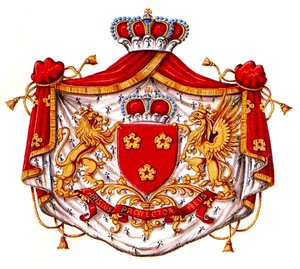 The House of Arenberg is an aristocratic lineage that is constituted by three successive families who took their name from Arenberg, a small territory of the Holy Roman Empire in the Eifel region. The inheritance of the House of Croÿ-Aarschot made the Arenbergs the wealthiest and most influential noble family of the Habsburg Netherlands. The Arenbergs were mediatized in 1811.

Floris van Egmond was count of Buren and Leerdam and Lord of IJsselstein and Sint Maartensdijk. He was stadtholder of Guelders (1507–1511) and Friesland (1515–1518) 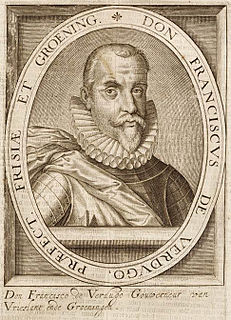 Francisco Verdugo, Spanish military commander in the Dutch Revolt, born in 1537 in, became Maestre de Campo General, in the Spanish Netherlands. He was also the last Spanish Stadtholder of Friesland, Groningen, Drenthe and Overijssel between 1581 and 1594. 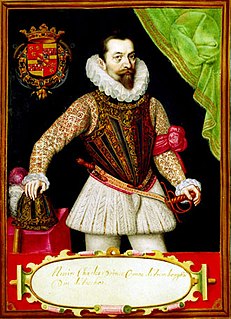 Princely Count Charles of Arenberg, duke of Aarschot, baron of Zevenbergen, knight of the Order of the Golden Fleece, was the second Princely Count of Arenberg and a leading aristocrat of the Habsburg Netherlands, who served as a courtier, soldier, minister and diplomat.

Cornelis of Glymes or Cornelis of Bergen was an Admiral of the Netherlands.

Florent of Berlaymont was Count of Lalaing and Berlaymont, and Stadtholder of Namur, Artois, Guelders-Zutphen and Luxembourg, in the service of the King of Spain. 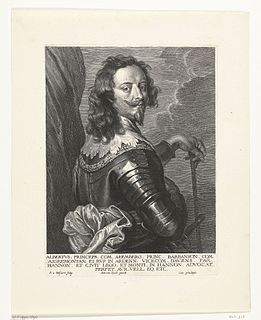 Albert de Ligne (1600–1674), Prince of Barbançon and Arenberg, knight of the Golden Fleece, was a Netherlandish nobleman and military commander in the Thirty Years' War and the Eighty Years' War.