Jeffrey Nigel Malone (born June 28, 1961) is an American retired professional basketball player. He played college basketball at Mississippi State, and is mostly known for his time with the Washington Bullets (1983–1990) of the National Basketball Association (NBA), where he was an NBA All-Star twice, playing the shooting guard position. He also played for the Utah Jazz, Philadelphia 76ers, and Miami Heat.

Malone averaged 19.0 points per game over 13 years in the NBA. He was known for his capable offense, averaging more than 20 points in six full NBA seasons with Washington and Utah. In particular, Malone was adept at running his defender through a pick or series of screens, receiving a pass and hitting a quick mid-range jump shot. Often, these shots were off-balance, either fading sideways or falling backwards away from hoop, but his accuracy remained lethal, even when well-defended. At times, Malone would go on a hot streak and score more than 15 points in a single quarter.

On January 3, 1984, Malone, during his rookie season, hit a game-winning 3-pointer against the Detroit Pistons [1] as he fell out of bounds along the left baseline and lofted the basketball above the backboard and made it to give the Bullets a 103–102 lead with 1 second left. This shot was listed in a votable list of the NBA's greatest shots. [2] Malone emerged as one of the best scoring guards in the league over the next few years, appearing in the NBA All-Star Game in both 1986 and 1987. He averaged a career-best 24.3 points per game with the Bullets in 1989-90, [3] his last season with the team.

Malone was traded to the Jazz in the off-season, adding another offensive weapon to a team that already featured future Hall of Famers Karl Malone and John Stockton. Jeff Malone averaged 18.6 points per game in his first year in Utah, and shot 91.7 percent on free throws, good for second in the league (narrowly losing the free throw title to Indiana's Reggie Miller, who shot 91.8 percent that season). Malone averaged 20.2 points per game the following year, and was named NBA Player of the Week for December 8, 1991. [4] His scoring helped the Jazz to the Western Conference Finals that year, at that time the franchise's best-ever performance in the playoffs. During the 1993-94 season, Malone was sent to the Philadelphia 76ers in a trade that brought Jeff Hornacek to Utah.

Malone also coached the NBA Development League's Columbus Riverdragons from 2001 to 2005, compiling a 102–98 record, before the franchise changed ownership and moved to Austin, Texas, renaming the team the Austin Toros and leaving Malone out of a job. [3] He spent some time as the head coach of the Florida Flame until that team ceased operations in 2006, citing a lack of a suitable arena to play in. [3]

Malone resides in Chandler, Arizona, with his wife. He has four children; Jay, Joshua, Justin, and Jasmine Malone and one grandson Marshall Knutson-Malone.

Malone is the nephew of the late Vivian Malone Jones, the first African American graduate of the University of Alabama, and Dr. Sharon Malone Holder, wife of U.S. Attorney General Eric Holder. [5]

He is not related to either former Jazz teammate Karl Malone or Moses Malone (with whom he was a teammate in Washington from 1986 to 1988). [6]

Shawn Paul Bradley is a German-American former professional basketball player who played center for the Philadelphia 76ers, New Jersey Nets, and Dallas Mavericks of the National Basketball Association (NBA). Nicknamed "The Stormin' Mormon", Bradley was one of the tallest players in NBA history at 7 ft 6 in (2.29 m). Bradley was born in Landstuhl, West Germany, as his family was stationed at the U.S. military base medical facility, and grew up in Castle Dale, Utah. He holds citizenship in both the United States and Germany. 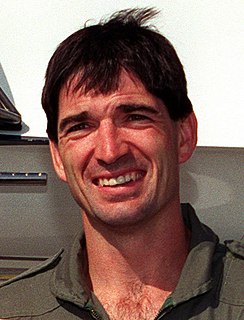 John Houston Stockton is an American former professional basketball player. Regarded as one of the greatest point guards and passers of all time, he spent his entire NBA career (1984–2003) as a point guard for the Utah Jazz, and the team made the playoffs in each of his 19 seasons. In 1997 and 1998, together with his longtime teammate Karl Malone, Stockton led the Jazz to the franchise's only two NBA Finals appearances, both of which were lost to the Chicago Bulls. 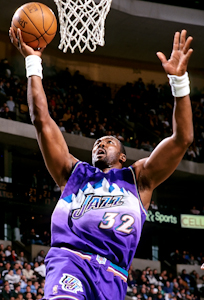 Karl Anthony Malone is an American retired professional basketball player. Nicknamed "the Mailman", he is considered one of the greatest power forwards in NBA history. 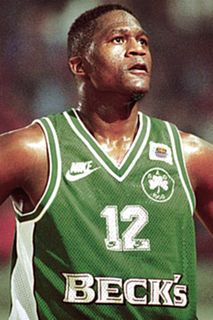 Jacques Dominique Wilkins is an American former professional basketball player who primarily played for the Atlanta Hawks of the National Basketball Association (NBA). Wilkins was a nine-time NBA All-Star and is widely viewed as one of the best dunkers in NBA history, earning the nickname "The Human Highlight Film". In 2006, Wilkins was inducted into the Naismith Memorial Basketball Hall of Fame. 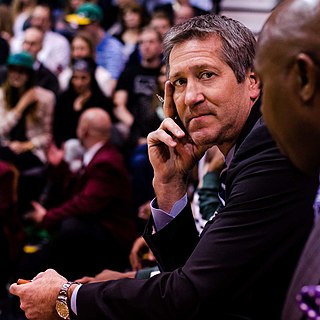 John Harding Lucas III is an American former professional basketball player who was last a player development coach for the Minnesota Timberwolves of the National Basketball Association. He played college basketball for Baylor and Oklahoma State. 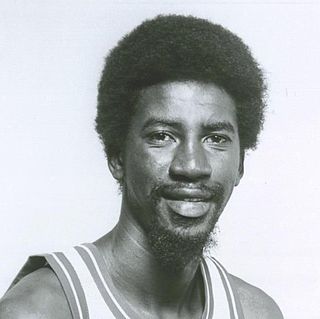 Peter Kelly Tripucka, is an American former professional basketball player who played in the National Basketball Association (NBA) from 1981 to 1991. He was a two-time NBA All Star and averaged over twenty points a game in five of the ten seasons that he played in. Tripucka played for the Detroit Pistons, Utah Jazz and was a member of the Charlotte Hornets during their inaugural season in the NBA. The son of NFL Pro-Bowl quarterback Frank Tripucka, Kelly was a color analyst for the New York Knicks for four years, ending with the 2011–12 season.

Thomas Doane Chambers is an American retired National Basketball Association (NBA) player. Chambers played basketball professionally from 1981 to 1997. Playing power forward in the NBA, Chambers was selected to four All-Star Games during his career. Of all former NBA players that are eligible for election to the Naismith Memorial Basketball Hall of Fame, Chambers and Antawn Jamison are the only two players to have scored 20,000 or more career points without being elected to the Hall. 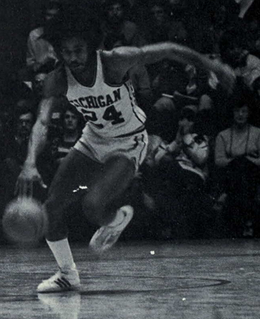 Jeffrey George Ruland is an American former professional basketball player and coach. He is the former head coach of the Iona Gaels men's basketball team and the UDC Firebirds men's college basketball team.

The 1996–97 NBA season was the Bulls' 31st season in the National Basketball Association. The Bulls entered the season as defending NBA champions, having defeated the Seattle SuperSonics in the 1996 NBA Finals in six games, winning their fourth NBA championship. During the offseason, the Bulls signed 43-year old free agent All-Star center Robert Parish, who won three championships with the Boston Celtics in the 1980s. Coming off of one of the greatest seasons in NBA history, The Bulls, on the backs of recording another first-place finish in their division and conference, repeated as NBA champions. The Bulls were led by Michael Jordan, perennial All-Star small forward Scottie Pippen, and rebound ace Dennis Rodman, with the former two both being selected for the 1997 NBA All-Star Game. Other notable players on the club's roster that year were clutch-specialist Croatian Toni Kukoč, and sharp-shooting point guard Steve Kerr.

The 1993–94 NBA season was the Jazz's 20th season in the National Basketball Association, and 15th season in Salt Lake City, Utah. During the offseason, the Jazz signed free agent All-Star forward Tom Chambers, and acquired Felton Spencer from the Minnesota Timberwolves. The Jazz played competitive basketball with a 22–8 start, but then lost five of their next six games. At midseason, the team traded Jeff Malone to the Philadelphia 76ers for Jeff Hornacek. With the addition of Hornacek, the Jazz posted a ten-game winning streak between February and March, and won nine of their final eleven games finishing third in the Midwest Division with a 53–29 record. John Stockton led the league in assists for the seventh straight season, as Karl Malone joined the list in all-time points scored topping the 19,000 point mark. Stockton averaged 15.1 points, 12.6 assists and 2.4 steals per game, while Malone averaged 25.2 points, 11.5 rebounds and 1.5 blocks per game. Both players were named to the All-NBA First Team, and selected for the 1994 NBA All-Star Game.

Steven Leonard Hayes is a retired American basketball player and coach. He played for several years for a variety of teams in the National Basketball Association, as well as in the Continental Basketball Association and in Europe. He is also known for his standout college career at Idaho State University, where he is recognized as one of the best players in the school's history.