Gerald "Jerry" LaNoue (1912–1983) was a three-year starting quarterback for the Nebraska Cornhuskers, and earned All Big Six Conference recognition in 1935, while playing for coach Dana X. Bible.

A native of Wisner, Nebraska, LaNoue wore jersey #11 throughout his Cornhusker career, and was considered the fastest Cornhusker running back of his era, and several historians have made comparisons between him and Husker legend Johnny Rodgers because of his speed and deceptive moves on the field. In starring for Nebraska, LaNoue followed his cousin (and Wisner native), Lewis H. Brown (American football), who was a starting quarterback for the Cornhuskers, as well.

Despite LaNoue's presence, the Wisner High football team had a 5-15-1 record during his playing career. Not long after LaNoue's graduation, the school dropped football.

LaNoue is also linked to Nebraska football because it was through his connections that fellow Wisner native Warren Alfson became a Cornhusker football player. Alfson ultimately earned All-America recognition in 1940. Like Alfson, LaNoue delayed entering the University of Nebraska-Lincoln for several years, as he graduated from Wisner High in 1931, making him somewhat older than his teammates and opponents.

Wisner is a city in northwestern Cuming County, Nebraska, United States. The population was 1,170 at the 2010 census.

Grant Alden Wistrom is a former American college and professional football player who was a defensive end in the National Football League (NFL) for nine seasons. Wistrom played college football for the University of Nebraska and was a two-time All-American. He was drafted in the first round of the 1998 NFL Draft, and played professionally for the St. Louis Rams and Seattle Seahawks of the NFL. 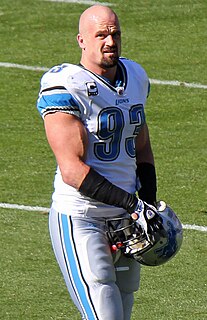 Kyle Dale Vanden Bosch is a former American football defensive end who played over ten years in the National Football League (NFL). He played college football for the University of Nebraska, and was drafted by the Arizona Cardinals in the second round of the 2001 NFL Draft. He also played for the Tennessee Titans and Detroit Lions before retiring following the 2012 NFL season. He is currently a post game commentator for the Arizona Cardinals on 98.7 Arizona Sports Radio.

Toniuolevaiavea Satele Fonoti is a Samoan-born former player of American college and professional football who was a guard in the National Football League (NFL) for five seasons during the early 2000s. He played college football for the University of Nebraska, and earned consensus All-American honors. The San Diego Chargers picked him in the second round of the 2002 NFL Draft, and he played professionally for the Chargers, Minnesota Vikings and Miami Dolphins of the NFL.

Jammal Alberto Lord is a former American football quarterback that started for the Nebraska Cornhuskers. He was selected with the tenth pick of the sixth round of the 2004 NFL Draft by the Houston Texans to play safety. He finished his pro football career playing at wide receiver and cornerback for the Indoor Football League's Abilene Ruff Riders in 2007.

Jerry Lee Tagge is a former American football player. He played college football as quarterback at the University of Nebraska–Lincoln, where he led the Nebraska Cornhuskers to consecutive national championships in 1970 and 1971. Tagge played professionally with the Green Bay Packers of the National Football League (NFL) from 1972 to 1974, the San Antonio Wings of the World Football League (WFL) in 1975, and the BC Lions of the Canadian Football League (CFL) from 1977 to 1979. 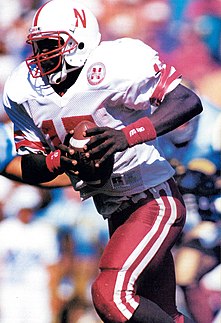 Tommie James Frazier Jr. is an American former college and professional football player who was a quarterback for the University of Nebraska.

Zachary Allen Wiegert is a former American college and professional football player who was an offensive tackle in the National Football League (NFL) for twelve seasons. He played college football for the University of Nebraska, earned All-American honors, and was a member of a national championship team. A second-round pick in the 1995 NFL Draft, he played professionally for the St. Louis Rams, Jacksonville Jaguars and Houston Texans of the NFL.

Branndon Stewart is a former American football player. He played quarterback for the University of Tennessee and Texas A&M University.

Warren Frank Alfson was an American football guard and linebacker for the Nebraska Cornhuskers, as well as the Brooklyn Dodgers of the National Football League.

Samuel Michael Keller is a former American football quarterback. He lives in Scottsdale, Arizona. He was signed by the Los Angeles Avengers as an undrafted free agent in 2008. He played college football at Arizona State and Nebraska. Although Keller's football career never took off on any significant professional level, he is still remembered by many college football fans for his bull-headed lawsuit against EA Sports and the NCAA that ultimately resulted in the cancellation of the widely popular NCAA Football after 17 consecutive years of successful release.

Lewis H. Brown was a quarterback for the Nebraska Cornhuskers from 1929 to 1931, while playing for coach Dana X. Bible. Brown lettered in 1930 and 1931, and started at quarterback in 1931. That season, he led the Cornhuskers to an 8-2 record, and an undefeated Big Six record and conference title.

The 1994 Nebraska Cornhuskers football team represented the University of Nebraska–Lincoln and was the national champion of the 1994 NCAA Division I-A football season. The team was coached by Tom Osborne and played their home games in Memorial Stadium in Lincoln, Nebraska. The Cornhuskers offense scored 459 points while the defense allowed 162 points.

Jim Kane was a Nebraska high school football, basketball, track and cross country coach, and was named the state’s “Coach of the Year” in 1983, and was posthumously named to the state’s High School Hall of Fame.

The 1941 Rose Bowl, played on January 1, 1941, was an American football bowl game. It was the 27th Rose Bowl Game with the #7 ranked Cornhuskers taking on the #2 ranked Stanford Indians. At the end of the 2017 college football season, this game stands as the only meeting between these two football programs. The final score was a 21–13 Stanford victory. This was the Cornhuskers' first bowl game.

The 1940 Nebraska Cornhuskers football team was an American football team that represented the University of Nebraska in the Big Six Conference during the 1940 college football season. In its fourth season under head coach Biff Jones, the team compiled an 8–2 record, won the Big Six championship, was ranked No. 7 in the final AP Poll, and lost to Stanford in the 1941 Rose Bowl. The Cornhuskers outscored opponents by a total of 183 to 75. The team played its home games at Memorial Stadium in Lincoln, Nebraska.

Adrian Martinez is an American football quarterback for the Nebraska Cornhuskers.