Last updated June 15, 2021
For the Episcopal bishop, see Jerry Lamb (bishop).
In this Chinese name, the family name is Lamb .

He is the younger brother of popular DJ, pop singer, and actor, Jan and radio personality-turned-singer Sandy. Jerry is best known to hardcore movie fans as the young lackey Pou-pan in the Young and Dangerous series. He was one of the few cast members to have been in the entire film series in the same role, including the spinoffs.

Jerry is distinguished for his nerdy looks but good attitude. An actor as well, one of his best performances is said to be seen in 1996's The Log with Michael Wong and Kent Cheng. He is married to Lily Hong with two sons.

Aside from films, Jerry was also the co-host of the Super Trio Series, a comedy variety show on TVB Jade with Chin Kar-lok and Eric Tsang. 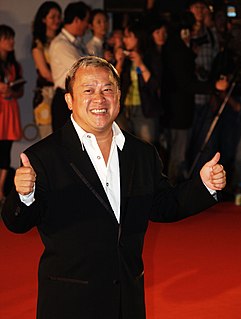 Roy Cheung Yiu-Yeung is a Hong Kong-based actor, best known on-screen for his roles as Triad gangsters in a number of films.

Patrick Tam is a Hong Kong actor and singer.

Jan Lamb Hoi-fong is a Hong Kong DJ, singer and actor. Lamb is the elder brother of Jerry Lamb and younger brother of singer and radio personality Sandy Lamb. He formed a comedic musical duo during the late 1980s with fellow actor and comedian Eric Kot, called Softhard). His wife Cass Phang is a singer.

Sam Lee Chan-sam is a Hong Kong actor. He started his film career when he was first spotted by director Fruit Chan who cast him in Made in Hong Kong. Since his debut, Lee has been working hard on many films. In 1999, he made thirteen films in that year alone. He appeared in a Japanese film Ping Pong as one of the contestants in the movie. Lee is best known for his role as Sha Jang in the Hong Kong television series The Monkey King: Quest for the Sutra (2002).

Manfred Wong is a Hong Kong radio personality, film producer, screenwriter, film director and actor. He is best known for his involvement as a writer for the Young and Dangerous film series.

Michael Tse Tin-wah is a Hong Kong actor and singer.

Michael Chan Wai-man is a Hong Kong actor and martial artist. A Hakka of Wuhua ancestry born in New Territories, Chan was well known for various triad roles, when in actuality he had been involved with triads in real life. In a media interview, he admitted to have been the No. 2 in the 14K Triad that dominated vice in Tsim Sha Tsui before the handover of Hong Kong. Having worked as a police officer in the prison system, he came into contact with many underworld figures and joined the Triads. Chan was expelled from the police force as a result of his links. 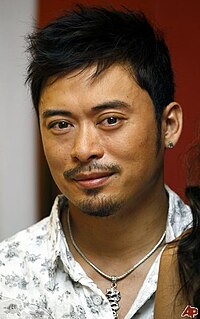 Nathan T. Wang is an American music composer and director. He graduated from Pomona College in California and received an Ambassadorial Scholarship from Rotary International to study at Oxford University. He is the winner of the Cable Ace award for the soundtrack to the documentary The Lost Children of Berlin. He also composed the acclaimed soundtrack for the aviation film, One Six Right.

Mak Chun Hung, also known as Brother Hung, is a Hong Kong composer who wrote the original score for hundreds of films and TV series in Hong Kong, mainland China, and Taiwan.