Last updated September 21, 2021
Puerto Rican politician
In this Spanish name, the first or paternal surname is Piñeroand the second or maternal family name is Jiménez.

Jesús T. Piñero Jiménez (April 16, 1897 – November 19, 1952) was the first and only native Puerto Rican to be appointed governor of Puerto Rico by the Government of the United States.

Jesús Toribio Piñero Jiménez [1] was born in Carolina, Puerto Rico to Emilio Piñero Estrella (son of Basilio Piñero) and Josefa Jiménez Sicardó into a wealthy family with roots in the Canary Islands. [2] His direct ancestor was Domingo Antonio José Piñero Pineda from Hermigua, La Gomera arriving in Puerto Rico around 1816. [3] He obtained his primary and secondary education in his hometown. In 1914, he attended the College of Liberal Arts of the University of Puerto Rico. He also attended the School of Engineering at the University of Pennsylvania in Philadelphia. [4]

In 1938, Piñero was one of the founders, along with Luis Muñoz Marín, of the Partido Popular Democrático (PPD). In the elections of 1940, he was elected to the House of Representatives. In 1944 he was elected as Resident Commissioner of Puerto Rico, and represented the island in the United States House of Representatives in Washington, D.C.. His position did not have voting powers in Congress. [4]

In 1946, President Harry S. Truman relieved Governor Rexford Guy Tugwell, who had served in this position from 1941, and named Piñero as governor in his place, the first native Puerto Rican appointed to that post under U.S. administration.

On May 21, 1948, a bill was introduced before the Puerto Rican Senate which would restrain the rights of the independence and Nationalist movements on the archipelago. The Senate, controlled by the PPD and presided by Luis Muñoz Marín, approved the bill that day. [5] This bill, which resembled the anti-communist Smith Act passed in the United States in 1940, became known as the Ley de la Mordaza (Gag Law) when Governor Piñero signed it into law on June 10, 1948. [6] Under this new law it would be a crime to print, publish, sell, or exhibit any material intended to paralyze or destroy the insular government; or to organize any society, group or assembly of people with a similar destructive intent. It made it illegal to sing a patriotic song, and reinforced the 1898 law that had made it illegal to display the Flag of Puerto Rico, with anyone found guilty of disobeying the law in any way being subject to a sentence of up to ten years imprisonment, a fine of up to US$10,000 (equivalent to $108,000in 2020), or both.

According to Dr. Leopoldo Figueroa, the only non-PPD member of the Puerto Rico House of Representatives, the law was repressive and was in violation of the First Amendment of the US Constitution which guarantees Freedom of Speech. He pointed out that the law as such was a violation of the civil rights of the people of Puerto Rico. [7] [8]

Piñero served as governor until 1949, when Puerto Rico celebrated its first popular election for the position, in which Muñoz Marín was elected governor. [4] During Piñero's administration, legislation was passed that later served as the basis for the economic development plan known as Operation Bootstrap. Plans for the construction of a new international airport for the Island were also drawn up during his governorship. From 1947 to 1951, Piñero served as U.S. representative to the Caribbean Commission.

Jesús T. Piñero died on November 19, 1952 in the town of Loíza, and was buried at the Carolina Municipal Cemetery in his hometown, Carolina, Puerto Rico. 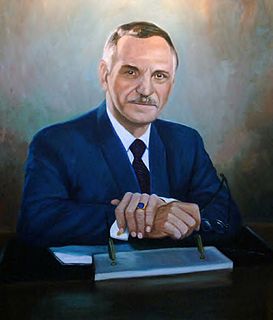 Don Luis Alberto Ferré Aguayo was a Puerto Rican engineer, industrialist, politician, philanthropist, and a patron of the arts. He was the Governor of Puerto Rico, serving from 1969 to 1973. He was the founder of the New Progressive Party, which advocates for Puerto Rico to become a state of the United States of America. He is a recipient of the Presidential Medal of Freedom.

José Luis Alberto Muñoz Marín was a Puerto Rican journalist, politician, statesman and was the first elected governor of Puerto Rico, regarded as the "Architect of the Puerto Rico Commonwealth." 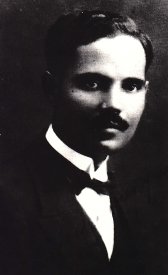 Pedro Albizu Campos was a Puerto Rican attorney and politician, and the leading figure in the Puerto Rican independence movement. Gifted in languages, he spoke six. He graduated from Harvard Law School with the highest grade point average in his law class, an achievement that earned him the right to give the valedictorian speech at his graduation ceremony. However, animus towards his mixed racial heritage led to his professors delaying two of his final exams in order to keep Albizu Campos from graduating on time. During his time at Harvard University he became involved in the Irish struggle for independence.

Antonio Rafael Barceló y Martínez was a Puerto Rican lawyer, businessman and the patriarch of what was to become one of Puerto Rico's most prominent political families. Barceló, who in 1917 became the first President of the Senate of Puerto Rico, played an instrumental role in the introduction and passage of legislation which permitted the realization of the School of Tropical Medicine and the construction of a Capitol building in Puerto Rico.

The Puerto Rico Nationalist Party is a Puerto Rican political party which was founded on September 17, 1922, in San Juan, Puerto Rico. Its primary goal was to work for Puerto Rico's independence. The Party's selection in 1930 of Pedro Albizu Campos as its president brought a radical change to the organization and its tactics.

The Jayuya Uprising, also known as the Jayuya Revolt or El Grito de Jayuya, was a Nationalist revolt that took place on October 30, 1950, in the town of Jayuya, Puerto Rico. The revolt, led by Blanca Canales, was one of the multiple revolts that occurred throughout Puerto Rico on that day against the Puerto Rican government supported by the United States. The Nationalists were opposed to US sovereignty over Puerto Rico.

Carlos Vélez Rieckehoff was the President of the New York chapter of the Puerto Rican Nationalist Party in the 1930s. In the 1990s Rieckehoff was among the protesters against the United States Navy's use of his birthplace, the island of Vieques, as a bombing range. He stood in front of the committee of the U.S. House of Representatives investigating the situation in Vieques and pleaded for the return of Vieques to the people of Puerto Rico. 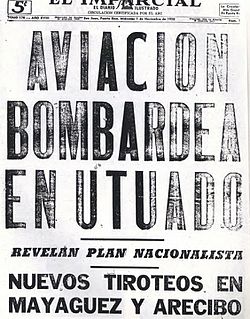 The Utuado uprising, also known as the Utuado revolt or El Grito de Utuado, refers to the revolt against the United States government in Puerto Rico which occurred on October 30, 1950 in various localities in Puerto Rico.

Francisco Matos Paoli March 9, 1915 – July 10, 2000), was a Puerto Rican poet, critic, and essayist who in 1977 was nominated for the Nobel Prize in Literature. His books were rooted in three major literary movements in Latin America: Romanticism, Modernism, and Postmodernism.

Hugo Margenat, was a Puerto Rican poet and Puerto Rican Independence advocate. His art was committed to serving a militant nationalistic agenda. He was the founder of the political youth pro-independence organizations "Acción Juventud Independentista" and the "Federación de Universitarios Pro Independencia".

Isolina Rondón was a political activist. She was one of the few witnesses of the killing of four Nationalists committed by local police officers in Puerto Rico during a confrontation with the supporters of the Nationalist Party that occurred in October 24, 1935, and which is known as the Río Piedras massacre. Rondón joined the political movement and became the Treasurer of the Puerto Rican Nationalist Party which staged various uprisings in Puerto Rico against the colonial Government of the United States in 1950.

Isabel Rosado, a.k.a. Doña Isabelita, was an educator, social worker, activist and member of the Puerto Rican Nationalist Party. Influenced by the events of the Ponce massacre, Rosado became a believer of the Puerto Rican independence movement and was imprisoned because of her commitment to the cause.

Leopoldo Figueroa a.k.a. "The deacon of the Puerto Rican Legislature", was a Puerto Rican politician, journalist, medical doctor and lawyer. Figueroa, who began his political career as an advocate of Puerto Rican Independence, was the co-founder of the "Independence Association", one of three political organizations which merged to form the Puerto Rican Nationalist Party. Figueroa, had changed political ideals and in 1948, was a member of the Partido Estadista Puertorriqueño. That year, he was the only member of the Puerto Rico House of Representatives who did not belong to the Partido Popular Democrático (PPD), and the only Representative to oppose the PPD's approval of what became known as the Ley de la Mordaza, which violated the civil rights of those who favored Puerto Rican Independence. On December 22, 2006, the Puerto Rican Legislature approved a law declaring every September 21, Leopoldo Figueroa Carreras Day.

Law 53 of 1948 better known as the Gag Law, was an act enacted by the Puerto Rico legislature of 1948, with the purpose of suppressing the independence movement in Puerto Rico. The act made it a crime to own or display a Puerto Rican flag, to sing a patriotic tune, to speak or write of independence, or to meet with anyone or hold any assembly in favor of Puerto Rican independence. It was passed by a legislature that was overwhelmingly dominated by members of the Popular Democratic Party (PPD), which supported developing an alternative political status for the island. The bill was signed into law on June 10, 1948 by Jesús T. Piñero, the United States-appointed governor. Opponents tried but failed to have the law declared unconstitutional by the United States Supreme Court.