Jesús Vázquez Martínez (born 9 September 1965) is a Spanish television presenter. In 2008 he became the first Spaniard to be selected as a Goodwill Ambassador for the UN Refugee Agency. [1]

Vázquez was born in Ferrol, Galicia. He moved to Melilla, where he joined as an undergraduate at the local Veterinary School; however, before he could complete his studies he moved to Madrid. In this period he worked as model.

Vázquez rose to fame in the early 1990s as the host of two television shows aimed at the teenage audience aired on Telecinco: La quinta marcha (1990-1991), which he hosted alongside Penélope Cruz, and Hablando se entiende la basca (1991-1993). In this period he starred in the film Aquí el que no corre, vuela. (1992), directed by Ramón Fernández and produced by Telecinco, along with Alfredo Landa, Arturo Fernández, Arancha del Sol and Natalia Estrada. In 1993 he ventured into singing with the album A dos milímetros escasos de tu boca, which achieved a Gold Record certificate; however, his music career did not have continuity.

In 1998 Vázquez presented A propósito, on Canal Sur and the game show with celebrities Gente con chispa, aired on regional televisions. In 2000, he hosted the short-lived late night show La central on Antena 3, cancelled due to poor ratings. In 2001, he was hired by Telemadrid to host talk show Ésta es mi gente. In 2002, he combined this work with presenting talent show Popstars: Todo por un sueño on Telecinco.

In 2003 Vázquez left Telemadrid to present talk show Nadie es perfecto on Telecinco; the show was cancelled after three weeks. In 2003, also on Telecinco, he presented the weekly debate show of Gran Hermano ( Big Brother ), as well as reality television series Hotel Glam and Vivo Cantando. In 2004 and 2005, Vázquez hosted the first two seasons of Gran Hermano VIP (Celebrity version of Big Brother). Subsequently, he hosted reality-show talent contest reality-show talent contest Operación Triunfo from 2005 to 2008, and the Spanish version of Survivor from 2006 to 2010. In addition, he presented daily game show ¡Allá tú! (Spanish adaptation of Deal or No Deal ) from 2004 to 2008.

When Telecinco and Cuatro merged into Mediaset España in 2011, it was decided that Vázquez would become a visible face of Cuatro. In Cuatro he hosted game show Uno para ganar (Spanish adaptation of Minute to Win It ) and the fourth season of reality television game show Pekín Express .

In 2012, Vázquez moved back to Telecinco to host La Voz (Spanish version of The Voice ). Since then he has also hosted talent shows La Voz Kids, Pequeños Gigantes, Levántate, Me lo dices o me lo cantas and Factor X .

In 2016, Vázquez joined Got Talent España on its first season as one of the four judges. In 2017, Vázquez hosted Proyecto Bullying, a docu-show that centered on school bullying that will air on Cuatro.

National career as a television presenter in Spain

Telecinco is a Spanish free-to-air television channel operated by Mediaset España Comunicación. The channel was previously known as Tele 5, because it had first begun its experimental transmissions on 10 March 1989, and a year later, it was officially launched on 3 March 1990, becoming the fifth of the national terrestrial television channels and the second private channel in Spain. In 1997, Tele 5 was rebranded as Telecinco, dropping the biscione-absent flower logo seen in other Mediaset channel logos.

Raquel Sánchez Silva is a Spanish television conductor and journalist. 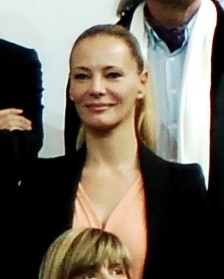 Paula Vázquez Picallo is a Spanish television presenter, also known for her modelling career in the fashion industry as well as her acting. 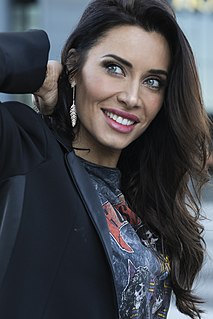 Pilar Rubio Fernández is a Spanish reporter and TV presenter. She became famous for covering events for the program Sé lo que hicisteis... for the television network La Sexta. From January 2010 to January 2013 she was linked to Telecinco, having hosted Operación Triunfo and ¡Más que baile!, besides of being the protagonist of the series Piratas, released in May 2011. Since 2014 she appears as collaborator in El Hormiguero. In 2012, she started a relationship with footballer Sergio Ramos, with whom she has three children.

María Mercedes Milá Mencos is a Spanish television presenter and journalist, most notable for her work on Spain's Telecinco's Gran Hermano, the Spanish version of the reality television series Big Brother.

Got Talent España, is the Spanish version of the international Got Talent series. It is hosted by Santi Millán and broadcast on Spanish Telecinco channel. The idea behind the programme is to search for the most talented and promising entertainment. The series premiered on 13 February 2016. The new show is a continuation of an original series Tienes Talento that had seen one season starting 25 January 2008 on Cuatro, hosted by Nuria Roca and Eduardo Aldán and had been discontinued after one season. On 15 June 2015, Mediaset España announced the revival of the series for the group's main channel Telecinco. The judges were Edurne, Eva Hache, Jesús Vázquez, and Jorge Javier Vázquez.

Spain participated in the Eurovision Song Contest 2018 with the song "Tu canción", written by Raúl Gómez and Sylvia Santoro. The song was performed by Amaia y Alfred, a duo made up of Amaia Romero and Alfred García. The Spanish broadcaster Televisión Española (TVE) used the ninth series of reality television talent competition Operación Triunfo as the platform to select the Spanish entry for the 2018 contest in Lisbon, Portugal. Amaia & Alfred with "Tu canción" were selected by the vote of the Spanish public from among nine competing entries.

María Jesús Ruiz is a Spanish model winner of Miss Spain in 2004.

Ana García Lozano is a Spanish journalist and presenter.

Cincomas is an international pay television channel owned by Mediaset España Comunicación. The channel is available in the Americas. It was officially launched on 22 January 2016. 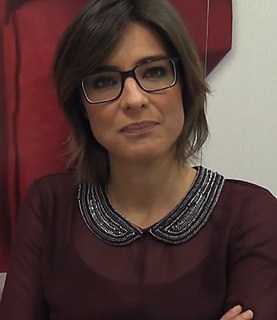 Raoul Vázquez García is a Spanish singer, songwriter and musician. He began to gain renown at the end of 2016 when he competed in the fourth edition in Spain of the talent show The Voice. However, his launch to fame came a year later, on the last trimester of 2017, following his participation in the ninth edition of Spanish talent Operación Triunfo 2017. On December 2018 he made a musical collaboration with Belén Aguilera with a song that became his first published work, “Tus monstruos”. After that, on June 2019, he released his first solo single, “Estaré ahí”.