Her "espectáculos" (a Spanish word that can mean both spectacle and show) do not necessarily adhere to traditional genre classification. These works draw on Greek tragedy, cabaret, pre-Columbian, and operatic traditions. They can take the form of a revue, sketch, "carpa", or political performance art. [1] From 1990 until 2005, she and her wife, the Argentine singer/actress Liliana Felipe, operated El Hábito and Teatro de la Capilla, alternative performances spaces in Mexico City. El Hábito is now under the administration of Las Reinas Chulas, and Rodríguez is now dedicated to independent projects. [2]

Rodríguez's works regularly revisit historical cultures, icons, and symbols, such as her "La gira mamal de la Coatlicue" of 1993, where she transforms a pre-Hispanic statue from the Mexica (Aztec) Room of Mexico’s National Anthropology Museum into a contemporary, living being. [4] Through the use of an indigenous female icon confined in a museum, the artist parodies the attitude of official Mexican politicians toward their country’s problems. This work calls upon her children not to forget her and complains about not having a special car (a “mama-mobile”) like the pope’s. Rodríguez calls the show “pre-Hispanic cabaret,” thus pointing to the need to reduce the monolithic myths upon which nationalism tends to be based. [5]

Other famous female icons recreated by Rodríguez in her shows include Frida Kahlo (Trece señoritas, 1983), La Malinche (transformed by Rodríguez into an interpreter for former president Ernesto Zedillo and the U.S. Marines) and the nun Juana Inés de la Cruz ("Las trampas del fatuo", 1990, and "Sor Juana en Almoloya," 1995). Jesusa has impersonated Sor Juana in many political demonstrations and, as part of the Mexico City Pride March. In these particular cases, Rodríguez represented her version of Mexican history "by revisiting and emphasizing the dissident sexualities of these women, who have been hidden or strategically forgotten by official culture". [6]

In 2002, she collaborated with Liliana Felipe and Regina Orozcos on "New War, New War," for the 3rd Encuentro of the Hemispheric Institute of Performance and Politics. [7] 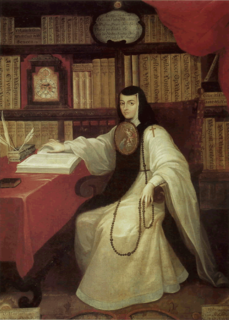 Sor Juana Inés de la Cruz, O.S.H., was a writer, philosopher, composer, poet of the Baroque school, and Hieronymite nun of New Spain (Mexico). Her outspoken opinions granted her lifelong names such as "The Tenth Muse" and "The Phoenix of Mexico", for she was a flame that rose from the ashes of "religious authoritarianism".

Astrid Hadad is a well-known Mexican actress and performance artist. She was born in February 26, 1957, Chetumal, Quintana Roo, Mexico. She attended the National Autonomous University of Mexico, originally planning to major in political science and journalism but then changing to theatre. After appearing in a number of shows, she came to the fore in 1985 in Donna Giovanni, an all-female adaptation of Mozart's opera, which was directed by Jesusa Rodríguez and became a great hit in Europe. It closed after its 500th performance, in the Palacio de Bellas Artes in Mexico City.

Almoloya de Juárez is a town in the State of Mexico and the seat of the municipality of Almoloya de Juárez. The name Almoloya comes from the Nahuatl, that is properly Almoloyan, composed of: atl, "water"; molo "impersonal voice of moloni, to flow the source" and yan, "place"; that it means "place where flows the water source".

Margo Glantz Shapiro is a Mexican writer, essayist, critic and academic. She has been a member of the Academia Mexicana de la Lengua since 1995. She is a recipient of the FIL Award.

Maria Vilalta i Soteras was a Catalan-born Mexican playwright and a theatre director. Her plays have been translated, published and produced in numerous countries. She won the critic’s prize for the best play of the year ten times. In November 2010 she was awarded the National Prize for Arts and Sciences in the field of Linguistics and Literature, for her work which has national and international resonance. President Felipe Calderón Hinojosa gave her the award at Mexico's National Palace. 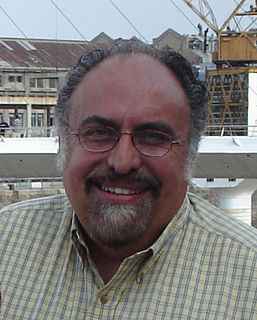 Tina Romero is a Mexican-American actress. A native of New York City, Romero moved to Mexico in her youth, and later established a career there as an actress. Her early film roles included The Divine Caste (1973) and the title character in the horror film Alucarda (1977). She has also appeared in American films, including Missing (1982), opposite Sissy Spacek and Jack Lemmon.

Mario Ramirez Reyes, also known to Hispanic audiences as El Comodín is a Mexican actor, comedian, writer, director, and producer of film, television, and theater who gained notoriety when he headlined the most luxurious theater show of the 90’s in Mexico: "El Show de las Estrellas" which set attendance records at prominent theaters Teatro Lírico, Aldama, Fru-Fru, Venustiano Carranza, and Teatro Blanquita in Mexico as well as then popular Hispanic theaters in the United States Teatro Los Pinos, Teatro Bay, and Teatro México.

Esperanza mía is a 2015 Argentinean telenovela. With script by Lily Ann Martin, Claudio Lacelli and Marta Betoldi] with production of Pol-ka was issued by Canal 13 between April 6, 2015 and January 14, 2016. For its recording, the producer acquired resolution cameras 4K UHD. It stars Mariano Martínez and Mariana Espósito. It also has the performances of Tomás Fonzi, Ana María Picchio, Carola Reyna, Federico D'Elía, Ángela Torres, Gabriela Toscano, Rita Cortese, Natalie Pérez and Franco Masini. In July 2015, a theatrical adaptation was presented at the Teatro Ópera in Buenos Aires, Argentina.

Juana Amanda Seux Ramírez, better known as Wanda Seux is a Mexican vedette, dancer and actress of Paraguayan origin, with a long career in film, television, and theatre in Mexico.

Luz Méndez de la Vega was a Guatemalan feminist writer, journalist, poet, academic and actress. As an academic, she concentrated on researching and rescuing the work of colonial Guatemalan women writers. She was the winner of Guatemala's highest prize for literature, Miguel Ángel Asturias National Literature Prize, and the Chilean Pablo Neruda Medal, among many other literary awards throughout her career.

Francisco de Aguiar y Seijas y Ulloa was a Spanish cleric and bishop, notable as bishop of Michoacán and archbishop of Mexico.

Juana Inés, is a Mexican television series co-produced by Canal Once and Bravo Films. The series is created by Patricia Arriaga Jordán, based on the life and work of Sor Juana Inés de la Cruz. The series consists of seven episodes and one season. Series production began on November 4, 2015 in the Ex-Hacienda Santa Mónica, in Mexico City. The series was released on 26 March 2016. 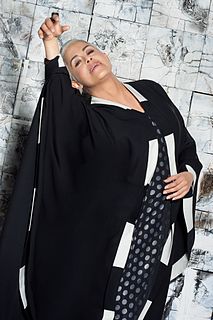 Eugenia León is one of the most respected singers in Mexico's contemporary music scene. In 1985 she took first place at the prestigious OTI Festival in Seville, Spain with the theme "El Fandango Aquí" by Marcial Alejandro. A winner of the Latin Grammy Lifetime Achievement Award, she has had a career spanning more than 35 years and 26 recorded albums, of which several million copies have been sold. She has performed with great success in the most important venues in the country, such as the Palacio de Bellas Artes, the Auditorio Nacional, the Sala Nezahualcóyotl, the Teatro de la Ciudad, and the Cervantino Festival. 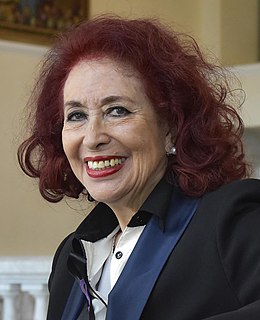 Lidia Falcón O'Neill is a Spanish politician and writer. With a degree in Law, Dramatic Art, and Journalism, and PhD in Philosophy, she has stood out for her defense of feminism in Spain, especially during the Transition.