The website includes Mitchell Bard's book "Myths and Facts", which it describes as "the pro-israel activist's 'bible'", and the website stopbds.com which aims to combat the Boycott, Divestment and Sanctions movement. [5]

The Jewish Virtual Library relies on history books, scientific studies, various encyclopedias, archives, polls, maps, and material from museums for its bibliography, as well as Wikipedia articles. According to the JVL, it received permission to use materials from the Library of Congress, from the American Jewish Historical Society, the Anti-Defamation League, the Simon Wiesenthal Center, the Ministry of Foreign Affairs (Israel), The Prime Minister's Office,[ which? ] Rabbi Joseph Telushkin and other resources. Mitchell G. Bard is the founder and Executive Director. [6]

The JVL hosts more than 60,000 articles and nearly 10,000 photographs and maps related to Jewish history, Israel, Israel–United States relations, the Holocaust, antisemitism and Judaism, as well as various statistics, information about politics, biographies, travel guides, and a section on Jewish women throughout history. The website includes the complete text of the Tanakh and most of the Babylonian Talmud. [7] [8]

It contains information about Israel education in America, including information about Israel Studies [9] and course materials on Israel-related subjects. It also provides book and movie reviews and a "Virtual Israel Experience" online project. Episodes of the Tel Aviv Review podcast are hosted on the site. The website aims to document the relationship between Israel and each of the 50 states, and publish declassified documents from sources such as the CIA, State Department and British Foreign Service that reveal insights into those organizations' attitudes toward Jews and Israel. [10]

John Jaeger, in a 2002 article published by the Association of College and Research Libraries, said of the JVL: "This library, once it is entered, is more like a living encyclopedia than it is anything else. One has options to click on, such as history, women, biography, politics, Israel, maps, and Judaic Treasures at the Library of Congress, with each launching a person into a different realm. The site is extremely well put together." [11] Also in 2002, Karen Evans of Indiana State University praised the online library for its "easily accessible, balanced information". [12] The Holocaust Memorial Resource and Education Center wrote that "the Jewish Virtual Library offers a comprehensive encyclopedia of Holocaust related articles that are searchable by topic. [13]

The American Israel Public Affairs Committee is a lobbying group that advocates pro-Israel policies to the Congress and Executive Branch of the United States. The current president of AIPAC is Betsy Berns Korn.

Kfar Malal is a moshav in central Israel. Located in the Sharon plain, it falls under the jurisdiction of Drom HaSharon Regional Council. In 2018 it had a population of 328.

The Council for the National Interest ("CNI") is a 501(c)(4) non-profit, non-partisan advocacy group in the United States. It is aligned with The Council for the National Interest Foundation ("CNIF"), an independent 501(c)(3) nonprofit organization. CNI was founded in 1989 by former Congressmen Paul Findley (R-Ill.) and Pete McCloskey (R-Calif.). Its first executive director was ten-term congressman John B. Anderson (R-Ill.), who ran as an Independent candidate in the 1980 presidential election.

Public diplomacy in Israel, also known as Hasbara, refers to public-relations efforts to disseminate positive information abroad about the State of Israel and its actions.

Aaron Aaronsohn was a Jewish agronomist, botanist, and Zionist activist, who was born in Romania and lived most of his life in the Land of Israel, then part of the Ottoman Empire. Aaronsohn was the discoverer of emmer, believed to be "the mother of wheat."

The Washington Institute for Near East Policy is an American pro-Israel think tank based in Washington, D.C., focused on the foreign policy of the United States in the Near East. It was established in 1985 with the support of AIPAC and the funding of many AIPAC donors, in order to provide higher quality research than AIPAC's publications. The institute's mission statement says that it seeks "to advance a balanced and realistic understanding of American interests in the Middle East and to promote the policies that secure them."

The Committee for Accuracy in Middle East Reporting in America (CAMERA) is an American non-profit pro-Israel media-monitoring, research and membership organization. According to its website, CAMERA is "devoted to promoting accurate and balanced coverage of Israel and the Middle East." The group says it was founded in 1982 "to respond to The Washington Post's coverage of Israel's Lebanon incursion", and to respond to what it considers the media's "general anti-Israel bias". 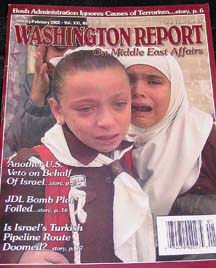 The Washington Report on Middle East Affairs magazine, published eight times per year, focuses on "news and analysis from and about the Middle East and U.S. policy in that region". The New York Times has characterized it as "critical of United States policies in the Middle East". In 2005, USA Today called it "a non-partisan publication that has been critical of Bush's policies". Representatives of pro-Israel organizations have criticized the Washington Report on Middle East Affairs as being aligned with the Arab lobby and as "anti-Israel".

The Israel lobby is the diverse coalition of those who, as individuals and/or as groups, seek to influence the foreign policy of the United States in support of Israel or the policies of the government of Israel. The lobby consists of secular, Christian, and Jewish-American individuals and groups. The largest pro-Israel lobbying group is Christians United for Israel. The American Israel Public Affairs Committee (AIPAC) is a leading organization within the lobby, speaking on behalf of a coalition of American Jewish groups.

The term Jewish lobby is used to describe organized lobbying attributed to Jews on domestic and foreign policy decisions, as political participants of representative government, conducted predominantly in the Jewish diaspora in a number of Western countries. When used to allege disproportionately favorable Jewish influence, it can be perceived as pejorative or as constituting antisemitism.

Mitchell Geoffrey Bard is an American foreign policy analyst, editor and author who specializes in U.S.–Middle East policy. He is the Executive Director of the non-profit American–Israeli Cooperative Enterprise (AICE), and the director of the Jewish Virtual Library.

The Holocaust had a deep effect on society both in Europe and the rest of the world, and today its consequences are still being felt both by children and adults whose ancestors were victims of this genocide.

Beit Zayit is a moshav in Israel. Located just outside the Jerusalem municipal border to the west, it falls under the jurisdiction of Mateh Yehuda Regional Council. In 2018 it had a population of 1,678.

Benzion Netanyahu was an Israeli historian. He served as Professor of History at Cornell University. A scholar of Judaic history, he was also an activist in the Revisionist Zionism movement, who lobbied in the United States to support the creation of the Jewish state. His field of expertise was the history of the Jews in Spain. He was an editor of the Hebrew Encyclopedia and Ze'ev Jabotinsky's personal secretary. Netanyahu was the father of current Israeli Prime Minister Benjamin Netanyahu and Yonatan Netanyahu, ex-commander of Sayeret Matkal, as well as Iddo Netanyahu, a physician, author and playwright. 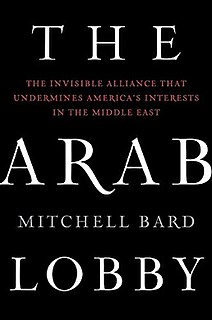 The Arab Lobby: The Invisible Alliance That Undermines America's Interests in the Middle East is a book written by Mitchell Bard, the head of the American-Israeli Cooperative Enterprise and the director of the Jewish Virtual Library, published in August 2010. It was written in response to John Mearsheimer and Stephen Walt's bestselling albeit controversial The Israel Lobby and U.S. Foreign Policy, which focused on the role of the Israel lobby in shaping U.S. foreign policy in a pro-Israel direction.

Jewish Voice for Labour (JVL) is an organisation formed in 2017 for Jewish members of the UK Labour Party. Its aims include a commitment "to strengthen the party in its opposition to all forms of racism, including anti-Semitism... to uphold the right of supporters of justice for Palestinians to engage in solidarity activities" and "to oppose attempts to widen the definition of antisemitism beyond its meaning of hostility towards, or discrimination against, Jews as Jews".