His brother Jaroslav was also a hockey player.

Holík later worked as a coach, being known for his temperament and active coaching style.

Holík joined the local Jiskra Havlíčkův Brod club in 1952. Holík would play for various levels of the club, finishing with the Czechoslovak Second Division team in 1963. In 1963, Holík moved up to the HC Dukla Jihlava team of the Czechoslovak Elite League. He would be a member of Dukla Jihlava for the next fifteen seasons. His best goal-scoring season was 1968–69, when he scored 28 goals in the season. In 1969–70, Holík had his best point total of 40 points, on 23 goals and 17 assists. Holík joined Rosenheim in Germany in 1978, playing two seasons before moving to Stadlau Wien in Vienna, Austria for 1980–81. Holík retired from playing after that season, but returned to active play for one more season with Wiener EV in the Austrian Second Division in 1984–85. 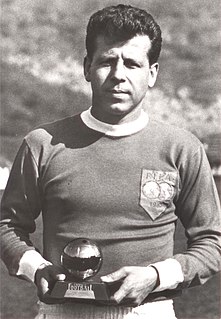 Dukla Prague was a Czech football club from the city of Prague. Established in 1948 as ATK Praha, the club won a total of 11 Czechoslovak league titles and eight Czechoslovak Cups, and in the 1966–67 season, reached the semi-finals of the European Cup. As late as 1985–86 they reached the UEFA Cup Winners' Cup semi-final and they also made a great impact in the American Challenge Cup competition in New York City with four wins between 1961 and 1964. The club sent seven players to the silver medal-winning Czechoslovakia national team in the 1962 World Cup, in a year which saw them win the fifth of their domestic league titles as well as their player Josef Masopust be named European Footballer of the Year. Between the start of the competition in 1955 and 1991, Dukla played more matches in the European Cup than any other team in Czechoslovakia.

Ladislav Lubina is former Czech ice hockey player and currently ice hockey coach. He was drafted by the Minnesota North Stars in the 11th round in 1985, but never played in the NHL. Lubina played in Czechoslovakia, Finland, Germany and Switzerland. 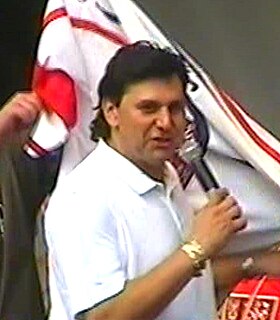 Vladimír Růžička is a Czech ice hockey coach and former professional player. Růžička was twice named the top player in the Czechoslovak Elite League, and was on the gold medal team in the Ice Hockey World Championship in 1985 and 1998 Olympic Games. He also played 233 games in the National Hockey League (NHL). Since 2008, Růžička has been the head coach of both HC Slavia Praha and the Czech national ice hockey team. 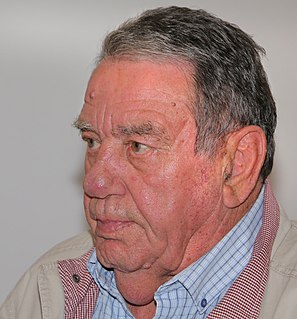 Jan Suchý is a retired ice hockey player from Havlíčkův Brod, Czechoslovakia. He was sometimes referred to as the "European Bobby Orr".

Milan Nový is a retired Czech ice hockey center. He played 16 seasons in the Czechoslovak Elite League, winning six league championships between 1974 and 1980.

Vladimír Martinec is a Czech retired ice hockey right wing who played both nationally and internationally in the 1970s and early 1980s. He won the Golden Hockey Stick award as top player in Czechoslovakia four times, in 1973, 1975, 1976, and 1979.

Miroslav Dvořák, nicknamed "Cookie", was a Czechoslovak professional ice hockey defenseman who played three seasons in the NHL with the Philadelphia Flyers. He is also well known as a famous player of Czech Extraliga (Czechoslovak) team HC České Budějovice, where he spent most of his active career.

Jiří Lála is a retired professional ice hockey player who played in the Czechoslovak Extraliga. He played for HC Jihlava. He was a member of the Czechoslovak 1981 Canada Cup team and was a silver medallist at the 1984 Winter Olympics. He was named the best forward at the 1983 World Championships and was the top scorer on the Czechoslovak team that won the world championship in 1985, with 13 points (8+5) in 10 games.

Jiří Kučera is a Czech professional ice hockey coach and former player. He is currently the head coach of HC Litvinov. During his playing career he played for HC Plzen and Dukla Jihlava in his home country and for Tappara in Finland, Luleå HF in Sweden, and EHC Kloten in Switzerland. He also represented the national team of either Czechoslovakia or Czech Republic eight times in the Ice Hockey World Championships and once in the Olympic Games.