Characters in Dream of the Red Chamber :

Jia Dao (779–843), courtesy name Langxian (浪仙), was a Chinese poet active during the Tang dynasty. He was born near modern Beijing; after a period as a Buddhist monk, he went to Chang'an. He became one of Han Yu's disciples, but failed the jinshi exam several times. He wrote both discursive gushi and lyric jintishi. His works were criticised as "thin" by Su Shi, and some other commentators have considered them limited and artificial.

Jia Xu, courtesy name Wenhe, was an official of the state of Cao Wei during the early Three Kingdoms period of China. He started his career in the late Eastern Han dynasty as a minor official. In 189, when the warlord Dong Zhuo took control of the Han central government, he assigned Jia Xu to the unit led by Niu Fu, his son-in-law. In 192, after Dong Zhuo was assassinated by Lü Bu, Jia Xu advised Li Jue, Guo Si and Dong Zhuo's loyalists to fight back and seize control of the imperial capital, Chang'an, from a new central government headed by Lü Bu and Wang Yun. After Li Jue and the others defeated Lü Bu and occupied Chang'an, Jia Xu served under the central government led by them. During this time, he ensured the safety of the figurehead Han emperor, Emperor Xian, who was being held hostage by Li Jue. He also attempted to prevent internal conflict between Li Jue and Guo Si, but with limited success. After Emperor Xian escaped from Chang'an, Jia Xu left Li Jue and briefly joined the general Duan Wei before becoming a strategist of the warlord Zhang Xiu. While serving under Zhang Xiu, he advised his lord on how to counter invasions by the warlord Cao Cao, who had received Emperor Xian in 196 and taken control of the central government. In 200, during the Battle of Guandu between Cao Cao and his rival Yuan Shao, Jia Xu urged Zhang Xiu to reject Yuan Shao's offer to form an alliance and instead surrender to Cao Cao. Zhang Xiu heeded his advice. Jia Xu then became one of Cao Cao's strategists.

Jia Kui (174-228), originally named Jia Qu, courtesy name Liangdao, was a military general and official who lived during the late Eastern Han dynasty of China. He served under the state of Cao Wei during the Three Kingdoms period.

Jia Chong (217–282), courtesy name Gonglü, was an official who lived during the late Three Kingdoms period and early Jin dynasty of China. He started his career as an advisor to Sima Shi and Sima Zhao, the regents of the state of Cao Wei in the Three Kingdoms era, and subsequently served as an official in the court of Sima Zhao's son, Sima Yan, after the establishment of the Jin dynasty. 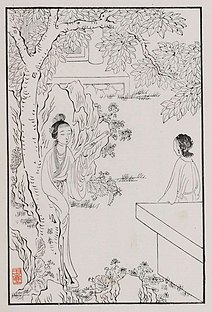 Jia Tanchun is the younger half-sister of Jia Baoyu and a major character in the Chinese novel Dream of the Red Chamber. She is the daughter of Jia Zheng and his concubine, Concubine Zhao. Tanchun is a very clever and capable person, once temporarily managing all household and economical affairs of the Rongguo Mansion when Wang Xifeng had a miscarriage. Despite this achievement, however, the fact she is the daughter of a concubine is still such a burden that she often claims Lady Wang, Baoyu's mother, as her own. Tanchun is also the "founder" of the White Crabapple Poetry Club, a private poetry club for the residents of Prospect Garden.

Jia Delong is a Chinese baseball player who was a member of Team China at the 2008 Summer Olympics.

The Politics of Fujian Province in the People's Republic of China is structured in a dual party-government system like all other governing institutions in mainland China.

Guo Yuan was an official serving under the warlord Yuan Shang in the late Eastern Han dynasty of China.

Chia is a surname. It is a Latin-alphabet spelling of various Chinese surnames, as well as an Italian surname.

Yin Mo, courtesy name Siqian, was a Confucian scholar and official of the state of Shu Han in the Three Kingdoms period of China.

Jia Kui may refer to:

Jia Deyao was a Chinese military commander and politician, member of the Anhui clique during the Beiyang Government.

The 1st Session of the 10th National People's Congress was held from March 5 to March 18 in Beijing, China, in conjunction with the 2003 session of the Chinese People's Political Consultative Conference.

Xun Yi, courtesy name Jingqian, was an official of the state of Cao Wei in the Three Kingdoms period of China. After the fall of Wei, he continued serving under the Jin dynasty, which replaced Wei in 266. He was the sixth son of Xun Yu.

Jia Kui, courtesy name Jingbo, was a Confucian philosopher who lived in the early Eastern Han period. He was a descendant of the Western Han politician and writer Jia Yi. He was born in was Pingling (平陵), Youfufeng Commandery (右扶風郡), which is located northeast of present-day Xingping, Shaanxi. He studied at university in Luoyang.