Last updated January 02, 2021
In this Chinese name, the family name is Jia.

Jia Hongsheng (simplified Chinese :贾宏声; traditional Chinese :賈宏聲; pinyin :Jiǎ Hóngshēng; 19 March 1967 – 5 July 2010) was a Chinese actor who became known in the late 1980s and early 1990s for roles in movies like The Case of the Silver Snake (1988), Good Morning, Beijing (1991), A Woman from North Shaanxi (1993) and Weekend Lover (1995). His performances were praised by critics and he developed a rebellious image that made him popular among artistic youth and the "Sixth Generation" of Chinese directors. [1]

However, he backed away from the limelight in 1995 after becoming addicted to cannabis and eventually heroin. His father, head of the local theatre in Jilin, retired two years before his retirement age, and along with his wife moved to Beijing to try to help Jia. He made a comeback in 2000, starring in the celebrated Suzhou River . The following year he starred in the film he is best known for to Western audiences, the autobiographical Quitting . It depicts his battle with addiction and his family trying to help him sober up, with all of the cast members being real people playing themselves.

Jia was born on 19 March 1967 in Siping, Jilin, to Jia Fengsen and Chai Xiuling, both retired theater actors from northeast China.[ citation needed ] He had a younger sister, Wang Tong.

Jia graduated from the Central Academy of Drama in Beijing in 1989,[ citation needed ] and soon gained fame in the late 1980s and early 1990s as an actor in films such as The Case of the Silver Snake and A Woman from North Shaanxi . While rehearsing for a stageplay titled Kiss of the Spider Woman (also directed by Zhang Yang) in the fall of 1992, Jia first became exposed to marijuana and eventually became addicted, while also occasionally using heroin. Then, in 1995, after filming Weekend Lover , Jia quit acting completely and lived off his younger sister Wang Tong. He was also an avid fan of The Beatles, listening to their music obsessively and began to fantasize himself as the son of the Beatles' lead singer, John Lennon.

In late 1995, his parents decided to move to Beijing in order to help their son quit drugs. Wang Tong also came back to live with her parents and brother in the same apartment. Several efforts made by his parents to penetrate their son's inner world were met with indifference, sometimes even hostility. Over time, however, Jia began to open up. He started to take regular walks with his father, usually buying a bottle or two of beer along the way. Jia Fengsen also bought his son cassette tapes by The Beatles.

In early 1996, Jia relapsed after being off drugs for almost six months. On 19 March of that year, after drinking several bottles of beer for the celebration of his twenty-ninth birthday, Jia slapped his father, claiming it was to teach him the "meaning of life". Jia's family was upset by this and felt he needed to be taught a lesson. They contacted the police, and three officers arrived at their house the next day. Jia was taken into custody and sent to a mental institution.

Upon arrival at the institution, after being placed on medication, his condition improved greatly. He also stopped fantasizing and started to see himself as just an ordinary human being. His doctor determined that Jia was not suffering from schizophrenia but recommended that he stay a little longer to sober completely. He was finally discharged on 19 March 1997, his thirtieth birthday.

2000's Suzhou River depicted his return to acting. The film is considered one of the most important of the "Sixth Generation" of Chinese cinema.[ citation needed ] His struggle with addiction was depicted in 2001's Quitting , in which he, his family and even the patients of the mental institution, play themselves. For the film, Jia Hongsheng won the 2002 Silver Screen Award for Best Actor.

In 2000, Jia began a four-year romantic involvement with Zhou Xun, his co-lead star in Suzhou River. He has been credited with getting her the lead role in Palace of Desire , having introduced her to director Li Shaohong.[ citation needed ]

On 5 July 2010, Jia jumped to his death from Building 19, his apartment building at the Anyuan Beili Community in Chaoyang District, Beijing that he shared with his parents. He was found dead on the trunk of a car around 6:00pm. [1] [2] In an announcement his parents said; "Our son is looking for his dream. Let's give him good wishes and respect his decision." [1] Lei Ting, a theatre producer and close friend of Jia's, stated that when he met him in June, Jia seemed "fully recovered." Likewise, Zhang Yang, director of Quitting, stated that he had spoken to Jia about the actor's next film not long before his death. [1] 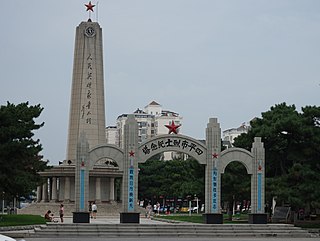 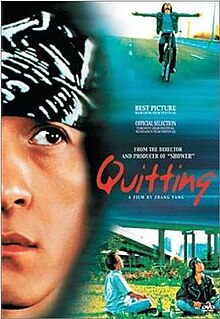 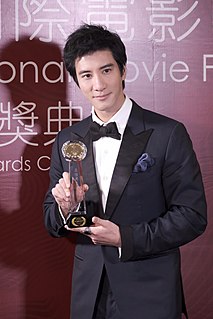 Wang Leehom, sometimes credited as Leehom Wang, is a Chinese-American singer-songwriter, actor, producer, and film director. Formally trained at Eastman School of Music, Williams College and Berklee College of Music, his music is known for fusing hip-hop and R&B, with traditional Chinese music. Since his 1995 debut, Wang has released 25 albums, that have sold over 60 million copies. He is a four-time winner and 19-time nominee of the Golden Melody Awards, the "Grammys" of Chinese music. His sold-out concert at the 90,000 seat Beijing Bird's Nest on April 14, 2012 was the first solo pop concert to be held at the iconic venue. With over 72 million followers on social media, Wang is one of the most followed celebrities in China. In 2018, CNN dubbed him "King of Chinese Pop" and the LA Times called him "the biggest American star America has never heard of." Wang was listed as one of Goldsea's "The 100 Most Inspiring Asian Americans of All Time".

Frozen is a 1997 Chinese film directed by Wang Xiaoshuai. The film was originally shot in 1994, but was banned by Chinese authorities and had to be smuggled out of the country. Moreover, Wang was operating under a blacklisting from the Chinese Film Bureau that was imposed after his previous film, The Days, was screened internationally without government approval. As such, Wang was forced to use the pseudonym "Wu Ming" while making this film.

Wang Hongwei is a Chinese actor. Wang is perhaps best known for his work with director Jia Zhangke. The two men were classmates at the Beijing Film Academy when they began their professional relationship, with Wang starring in Jia's breakthrough short film Xiao Shan Going Home in 1995. Since then, Wang has had roles in nearly all of Jia's films, including starring roles in Jia's debut Xiao Wu and follow-up, Platform.

Li Shaohong is a Chinese film and television director and producer. She is considered a member of the Fifth Generation movement, and China's top woman director. Her films have won multiple awards in China and abroad, including the Golden Montgolfiere at the 1992 Three Continents Festival, and the Silver Bear at the 1995 Berlin International Film Festival.

Sai Jinhua was a Chinese courtesan who became the acquaintance of Alfred von Waldersee. Her real family name was Cao. Sometimes she said her family name was Zhao. During her career as a courtesan she used the names Fu Caiyun, Sai Jinhua, and Cao Menglan. Her art name (hao) was Weizhao Lingfei. Some people referred to her as Sai Erye.

Falling Flowers is a 2012 Chinese biographical drama film directed by Huo Jianqi and written by Yi Fuhai and Su Xiaowei. It stars Song Jia, Huang Jue, Jaco Zhang, and Wang Renjun. The film premiered at the 2012 Shanghai International Film Festival, and released in China on March 8, 2013.

Murphy's Law of Love is a 2015 Taiwanese romantic comedy television series produced by Sanlih E-Television. Starring Danson Tang, Ivelyn Lee, Jolin Chien and Jenna Wang as the main cast. The Chinese title literally translates to "Perhaps, This is Called Love". Filming began on February 24, 2015, the drama will be filmed as it airs. First original broadcast begins March 20, 2015 on SETTV channel airing on Fridays from 10:00-11:30 pm.

The 2017 Chinese Football Association Division Two League season was the 28th season since its establishment in 1989. The league was expanded to 24 teams, with 12 teams in North Group and 12 teams in South Group.

The 2018 Chinese Football Association Division Two League season was the 29th season since its establishment in 1989. The league is expanded to 28 teams, with 14 teams in North Group and 14 teams in South Group.