Jia Ling (Chinese :贾玲), whose full name is Jia Yuling, is a Chinese xiangsheng performer, comedian and actress who rose to fame after appearing at the 2010 Spring Festival Gala. She was born in Xiangyang, Hubei Province. She founded the company called Big Bowl Entertainment (大碗娱乐）in 2016 with Sun Ji Bin and Li Kun. [1]

Jia Ling was born in a family of four in Dashan, Hubei Province, from a poor family. [2] In 1994, she studied acting for two years in Wuhan Art School. [3] In 2000, she applied for the acting major of the Central Academy of Drama and was finally unsuccessful. In 2001, she applied for the Drama Performance and Cross Talk Performance of the Central Academy of Drama at the same time. Although both majors were admitted, due to the mistaken selection of her mother Li Huanying, Jia Ling finally could only enroll in the college class of cross talk performance. [4]

After graduation, Jia Ling was unable to receive cross talk performance work because of her female status, so she began to work everywhere, making a living by working as a part-time host, script creator, temporary assistant to the artist, and the assistance of her sister Jia Dan. In 2005, she was admitted to the China Broadcasting Art Troupe and became a student under Feng Gong. [5]

Jia was born Jia Yuling (贾俞玲; Jiǎ Yùlíng) in 1982 in Xiangyang, Hubei. After graduating from the Central Academy of Drama in 2003 where she studied Xiangsheng performance, she worked with crosstalk performer Feng Gong appearing a series of short sketches. In the same year she participated in China's National Comic sketch Tournament (全国相声小品邀请赛) winning first place. [6]

In 2010 she made her television debut during the 2010 CCTV New Year's Gala where she appeared in a segment called Gala Talk which was later voted the third favourite performance of the night.

Later in 2015, she performed a controversial comedy sketch of Hua Mulan where the sketch portrayed Mulan to be a silly food-hungry and gluttonous girl that was duped into joining the army. An institute called Mulan Cultural Research Centre asked her to apologize. But a lot of Chinese netizens also support her and believe that her performance should be acceptable. The authority and reliability of the Mulan Cultural Research Centre are still controversial, and many people asked for enhancing the regulation of this kind of institutes. [10] [11]

In 2016, she and her team took part in a TV show of comedy competition called Comedy General Mobilization S1; her sketch "Hello, Li Huanying" was played in the first episode in the show, and won the first place in the episode. [12]

In 2017, her company is the co-producer of the TV show Happy Theater which is about improv comedy. [13] She also took part in the TV show Comedy General Mobilization S2 in the same year and became one of the team leaders. [14]

In 2021, her directorial debut Hi, Mom , which was adapted from her 2016 sketch comedy of the same name, was released during the Chinese Spring Festival. She made this film in memory of her mother. [18]

Jia Qing is a Chinese actress and singer. She is known for her roles in television dramas The Demi-Gods and Semi-Devils, The Deer and the Cauldron, The Wife's Lies and its sister series The Lover's Lies, and God of War, Zhao Yun. 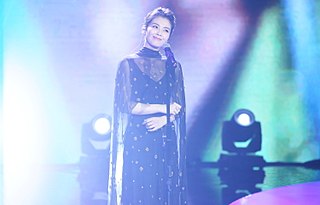 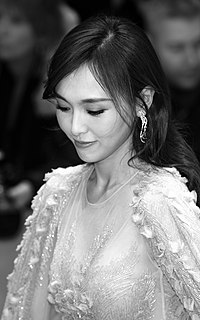 Tang Yan , also known as Tiffany Tang, is a Chinese actress and singer. She graduated from the Central Academy of Drama in 2006. In 2007, she was nominated for the Best Actress award at the Shanghai Television Festival for her film debut in Farewell for Love. She left her company Orange Sky Entertainment Group mid-2012 to set up her own studio. 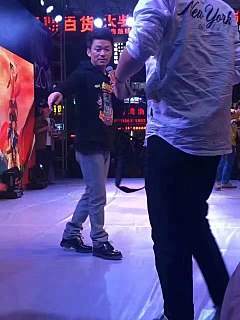 Wang Baoqiang is a Chinese actor. His debut role was that of Yuan Fengming in the movie Blind Shaft, for which he shared the Best New Performer prize at the 2003 Golden Horse Awards. 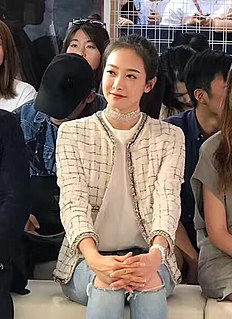 Song Qian, known professionally as Victoria or Victoria Song, is a Chinese singer, dancer, actress, model, television presenter and author active in South Korea and China. She debuted as a member of South Korean girl group f(x) in September 2009. 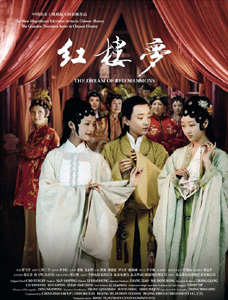 Ni Ni is a Chinese actress. She is known for her role as Yu Mo in the 2011 film The Flowers of War, directed by Zhang Yimou; and Ling Xi in the 2019 television series Love and Destiny. 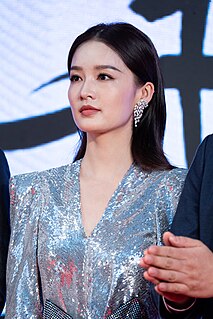 Gao Wei Guang is a Chinese model and actor. He is known for his lead roles in hit dramas Candle In The Tomb: The Wrath Of Time, Eternal Love Of Dream, etc.

Jin Chen, also known as Gina Jin, is a Chinese actress. She is recognized for her role in the web dramas Wu Xin: The Monster Killer and Candle in the Tomb: Mu Ye Gui Shi.

Huang Xiaoyun, is a Chinese singer and actress of Bouyei ethnicity. She first gained recognition in the Chinese television talent show The Voice of China 4 in 2015. In 2020, she was a Surprise Challenger on Hunan TV's singing competition show, Singer 2020, and her challenge was successful.

Zhang Xiaofei is a Chinese actress and comedian.