Jia Wenpeng (Chinese :贾文鹏; born August 3, 1978) is a former Chinese footballer who spent the majority of his career for Bayi FC before joining Shanghai Shenhua, Chongqing Lifan and Guangzhou Pharmaceutical where he was released at the end of 2008 season.

Jia Wenpeng began his professional football career in 1996 with Bayi FC where he was a loyal member of the team until the end of the 2003 league season saw the club relegated and then later disbanded at the end of the campaign. [1] He would join top tier club Shanghai Shenhua in 2004, however he did not play well at the club and was released at the end of 2004 season. Jia would then move to Chongqing Lifan in 2005 for 2.4 million Yuan and then later transferred to second tier club Guangzhou Pharmaceutical along with team mate Zhou Lin in 2007. [2] While at Guangzhou he would play a small part as the team won the division title, however while he gained more playing time the following season he was released in 2008. [3]

Jia Wenpeng was named as the head coach of China League Two side Shenyang Dongjin on December 4, 2016.

Xie Hui is a former professional Chinese football player who is currently the current head coach for Nantong Zhiyun F.C..

Shanghai Shenxin Football Club was a professional football club that participated in China's football league system between 2003 and 2019 under licence from the Chinese Football Association (CFA). The team was based in Jinshan District, Shanghai and their home stadium was the Jinshan Football Stadium that has a seating capacity of 30,000. Their majority shareholder was Chinese real estate company Hengyuan Corporation. 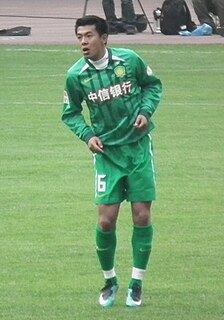 Xu Liang is a Chinese footballer.

Xu Genbao is a Chinese football manager and a former international football player. He is the current founder, chairman and general coach of Shanghai East Asia football club as well as also being the owner of the Genbao Football Academy. Though he was a Chinese international footballer, it was not until he became a manager and won the Chinese Jia-A League title with the China B team that he started to gain attention within Chinese football. This early success led to a Chinese national team appointment and then successful spells at Shanghai Shenhua and Dalian Wanda.

Luis Alfredo Ramírez Quioto, nicknamed El Bombero, is a Honduran former football striker who last played for Deportes Savio in the Honduran national league. He is nicknamed Bombero because he used to work at a gas station as a gas pump attendant.

The 2003 Chinese Jia-A League season is the tenth season of professional association football and the 42nd top-tier overall league season in China. The league started on March 15 and ended on November 30, 2003 while in preparation for the rebranded Chinese Super League three teams were relegated at the end of the season.

Chen Lei is a professional Chinese football player who currently plays for Chongqing Lifan in the Chinese Super League.

Zhou Lin is a retired Chinese football player as a defender.

Yang Pengfeng is a football commentator and former Chinese footballer. He played for Guangzhou Songri, Sichuan Guancheng and Guangzhou Pharmaceutical before ending his career with G.D. Artilheiros.

Wen Xiaoming is a Chinese former footballer who predominantly played for Guangzhou Pharmaceutical. After eight years at the club he retired at the end of season 2008 because of a knee injury.

Xiong Fei is a Chinese football player who plays for Wuhan Three Towns in the China League One as a right-back or defensive midfielder.

Peng Xinli is a Chinese footballer who currently plays as a left-footed midfielder for Chinese Super League side Shanghai Shenhua.

Hao Haitao is a Chinese football coach and a former football player. He currently sided with Guizhou Hengfeng as the head coach. He previously played for Qingdao Hainiu, Shanghai Pudong and Tianjin Teda. After retiring, he would move into assistant management before becoming the head coach of Tianjin Songjiang and Chengdu Blades F.C.. Hao haitao and former China national player Hao Haidong are cousins.

The 2015 Ping An Chinese Football Association Super League was the 12th season since the establishment of the Chinese Super League, the 22nd season of a professional Association football league and the 54th top-tier league season in China. The league title sponsor was Ping An Insurance. Guangzhou Evergrande Taobao won their fifth consecutive title of the league.

Ma Zhen is a Chinese professional footballer who currently plays as a goalkeeper for Shanghai Shenhua.

The 2003–2009 Chinese football match-fixing scandals were revealed by a large-scale 2009–2013 investigation of football betting, bribery and match-fixing. The scandals were first made public in October 2009. Instead of being led by General Administration of Sport of China or Chinese Football Association like previous investigations, this investigation was led by the Ministry of Public Security. Xie Yalong, Nan Yong and Yang Yimin, who are all former vice presidents of Chinese Football Association, along with Zhang Jianqiang and some other CFA officials were arrested and removed from their posts. Shanghai Shenhua F.C. was stripped of their 2003 Chinese Jia-A League title. Lu Jun, the only Chinese referee in the history of FIFA World Cup, and China national football team players Shen Si, Jiang Jin, Qi Hong, Li Ming, were arrested and sentenced to 5.5 years or 6 years in jail.