Shimen District is a sparsely populated rural district in the northern part of New Taipei City in northern Taiwan. It is part of the north coast scenic area and includes Taiwan's northernmost point, Cape Fugui.

Gelao is a dialect cluster of Kra languages in the Kra–Dai language family. It is spoken by the Gelao people in southern China and northern Vietnam. Despite an ethnic population of 580,000, only a few thousand still speak Gelao. Estimates run from 3,000 in China by Li in 1999, of which 500 are monolinguals, to 7,900 by Edmondson in 2008. Edmondson (2002) estimates that the three Gelao varieties of Vietnam have only about 350 speakers altogether.

Keluo is a dormant volcanic field 310 kilometers (190 mi) north-by-northwest of Daquijin in northeastern China. It is located at an intersection of regional lineaments trending northeast and northwest; the volcanoes were erupted through basement igneous and sedimentary rocks from the Jurassic to Cretaceous, through granite, and through pre-Permian metasediments. Like the Wudalianchi volcanic to its south, it contains high-potassium basaltic cinder cones.

Central Range Point is a mountain in Taiwan with an elevation of 3,703 m. It looks like a triangular pyramid from the north and south sides, being the south side very steep and difficult to climb. The normal climbing route comes from Nanhu Mountain. Its west side path, the normal route continuing south, is also known as the "Death Crest" due to its danger.

Wen County or Wenxian is a county under the administration of the prefecture-level city of Longnan, in the southeast of Gansu province, China, bordering Sichuan province to the south and west. It has a land area of 4,994 square kilometers, and a population of 240,000 (2004).

The Xueshan Range is a mountain range in northern Taiwan. It faces the Chungyang Range on the southeast. The tallest peak of Xueshan Range is Xueshan, which has a height of 3,886 m (12,749 ft). Shei-Pa National Park is located around the peaks of Xueshan and Dabajianshan.

Shidian County is under the administration of the [[prefecture-level city of Baoshan, in the west of Yunnan province, China. Its seat is the town of Dianyang (甸阳镇).

Baoqing County is a county of southeastern Heilongjiang province, People's Republic of China. It is under the jurisdiction of the prefecture-level city of Shuangyashan. 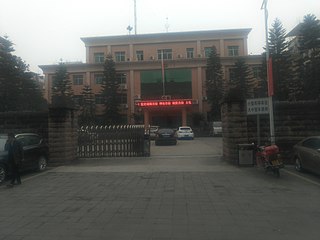 Shuanglong Town is a town in Changshou District, Chongqing, People's Republic of China.

Meilin is a town under the jurisdiction of Wuhua County, Meizhou City, Guangdong Province, southern China.

Jianshan Temple, is a buddhist temple located in Yangshuo County, Guilin, Guangxi Zhuang Autonomous Region, in the People's Republic of China. It includes the shanmen, Mahavira Hall, Meditation Room, Dining Room, etc. The temple has a building area of about 5,589-square-metre (60,160 sq ft) and covers an area of 14,333.3-metre (47,025 ft).

Heishijiao Subdistrict is a township-level division of the Shahekou District of Dalian, Liaoning, China.

The 159th Division(Chinese: 第159师) was created in November 1948 under the Regulation of the Redesignations of All Organizations and Units of the Army, issued by Central Military Commission on 1 November 1948, basing on the 7th Independent Division of Jichareliao Military District, formed in February.

Tianding Subdistrict is a subdistrict of Yuelu District in Changsha, Hunan, China. It was reorganized to a subdistrict from the former Tianding Township in August 2012. The subdistrict has an area of 20.86 square kilometres (8.05 sq mi) with a population of 56,800.