James Edwin Otto (born January 5, 1938) is an American former professional football player who played as a center for the Oakland Raiders of the American Football League (AFL) and National Football League (NFL) for 15 seasons. He played collegiate football at the University of Miami for the Miami Hurricanes.

Otto was inducted into the Pro Football Hall of Fame in 1980, his first year of eligibility.

No National Football League team showed interest in the undersized center. Otto was drafted by the proposed Minneapolis franchise of the new American Football League. When the Minneapolis contingent reneged to accept an NFL franchise, Otto's rights defaulted to the AFL's Oakland Raiders. He then signed with the Raiders and played for the entire ten years of the league's existence and five years beyond. He was issued jersey number 50 for the AFL's inaugural season, 1960, but switched to his familiar 00 the next season. Otto worked diligently to build his body up to his playing weight of 255 pounds (116 kg).

For the next 15 years, Otto was a fixture at center for the Raiders, never missing a single game due to injury, and played in 210 consecutive games. He won one AFL/AFC championship in 1967 against the Houston Oilers with the Raiders, but lost five: in 1968, 1969, 1970, 1973, and 1974 to the New York Jets, Kansas City Chiefs, Baltimore Colts, Miami Dolphins, and Pittsburgh Steelers, respectively, with all five teams winning the Super Bowl. He played alongside Gene Upshaw, another Hall of Famer, at left guard from 1967 to 1974. [1] In the 1967 regular season, Oakland scored 468 points (33.4 points/game), leading the AFL, but lost Super Bowl II to the Green Bay Packers. In 1968, Oakland scored 453 points (32.4 points/game) in the regular season, again leading the AFL, and beat the Chiefs in the divisional round (unscheduled tiebreaker) before losing to the Jets. In the 1969 regular season, Oakland scored 377 points (26.9 points/game) to lead the AFL for the third consecutive year, and beat the Houston Oilers in the new divisional round of the AFL playoffs before losing to the Chiefs. In the 1970 regular season, the first year of the NFL-AFL merger, Oakland scored 300 points (21.4 points/game), ranking ninth in the 26-team NFL, and beat the Miami Dolphins in the AFC playoffs before losing to the Colts. The Raiders missed the playoffs for the first time in five years in 1971, despite scoring 344 points (24.6 points/game), second highest in the NFL.

The Raiders came back stronger in 1972, scoring 365 points (26.1 points/game), ranking third in the NFL, but lost 13–7 to the Pittsburgh Steelers in the divisional round of the AFC playoffs, the famous Immaculate Reception game, in which Otto also made the only pass reception of his professional career. In the 1973 regular season, Oakland scored 292 points (20.9 points/game), tenth in the NFL, and avenged their defeat to the Steelers but lost to the Dolphins. In Otto's final year, 1974, Oakland scored 355 points (25.4 points/game), leading the NFL, and avenged their playoff loss to the Dolphins but lost to the Steelers again. In 1975, he was replaced by Dave Dalby, in his fourth season out of UCLA. Otto was the last member of the Oakland Raiders inaugural team from 1960 to retire.

Otto was one of only twenty players to play for the entire ten-year existence of the American Football League, and one of only three players to play in all of his team's AFL games. Otto was also selected as The Sporting News All-League center from 1960 through 1969. He was an All-Star in the first 13 of his 15 seasons – every year in the AFL from 1960 through 1969 and three of his five seasons in the NFL. He was also named the starting center on the AFL All-Time Team.

He was elected to the Pro Football Hall of Fame in 1980, the first year he was eligible. In 1999, he was ranked number 78 on The Sporting News' list of the 100 Greatest Football Players. In 2019, he was revealed as being selected to the National Football League 100th Anniversary All-Time Team.

Otto's body was punished greatly during his NFL career, resulting in nearly 74 operations, including 28 on his knee (nine of them during his playing career) and multiple joint replacements. His joints became riddled with arthritis, and he developed debilitating back and neck problems. [2] In his book, "The Pain of Glory" Otto described near-death experiences from medical procedures, including fighting off three life-threatening infections due to complications from his artificial joints. During one six-month stretch, he was without a right knee joint because he had to wait for an infection to heal before another artificial knee could be implanted. Otto eventually had to have his right leg amputated on August 1, 2007. [3] Despite his maladies, Otto says he has no regrets and wouldn't change a thing even if given the opportunity to do it over again. He discussed his sports injuries as well as the concussions issue in a 2013 Frontline interview for "League of Denial: The NFL's Concussion Crisis". [4]

Otto was also the subject of 'The Jim Otto Suite', a series of three multimedia works by American contemporary artist Matthew Barney which served as a precursor to The Cremaster Cycle. [5]

He was elected to the Wisconsin Athletic Hall of Fame in 1998. 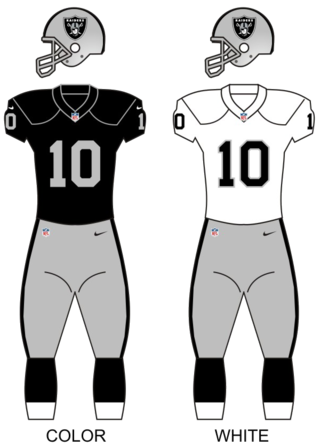 The Las Vegas Raiders are a professional American football team based in the Las Vegas metropolitan area. The Raiders compete in the National Football League (NFL) as a member club of the league's American Football Conference (AFC) West division. The club plays its home games at Allegiant Stadium in Paradise, Nevada, and is headquartered in Henderson, Nevada.

The second AFL-NFL World Championship Game was an American football game played on January 14, 1968, at the Orange Bowl in Miami, Florida. The National Football League (NFL)'s defending champion Green Bay Packers defeated the American Football League (AFL) champion Oakland Raiders by the score of 33–14. This game and the following year's are the only two Super Bowls played in the same stadium in consecutive seasons. 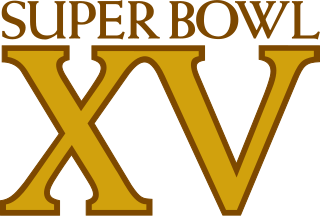 Daryle Pasquale Lamonica was an American football quarterback who played in the American Football League (AFL) and the National Football League (NFL) for 12 seasons, primarily with the Oakland Raiders. He spent his first four seasons mostly as a backup for the Buffalo Bills, who selected him in the 24th round of the 1963 AFL Draft. Lamonica played his next eight seasons as the primary starter of the Raiders, including after they joined the NFL through the AFL–NFL merger.

George Frederick Blanda was an American football placekicker and quarterback who played professionally in the American Football League (AFL) and National Football League (NFL). Blanda played 26 seasons of professional football, the most in the sport's history, and had scored more points than anyone in history at the time of his retirement.

Robert Allen Griese is a former American football quarterback who earned All-American honors with the Purdue Boilermakers before being drafted in 1967 by the American Football League's Miami Dolphins. Griese led the Dolphins to a then record three consecutive Super Bowl appearances, including two Super Bowl victories in VII and VIII. Griese was inducted into the College Football Hall of Fame and the Indiana Football Hall of Fame in 1984 and the Pro Football Hall of Fame in 1990. He later worked as a television commentator, calling NFL games for NBC Sports and college football for ESPN and ABC Sports. Griese is one of three quarterbacks from Purdue to win the Super Bowl.

James William Plunkett is a former American football quarterback who played in the National Football League (NFL) for sixteen seasons. He achieved his greatest professional success during his final eight seasons with the Raiders franchise, whom he led to two Super Bowl titles. 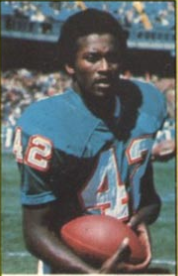 Paul Dryden Warfield is an American former professional football player who was a wide receiver in the National Football League (NFL) from 1964 to 1977 for the Cleveland Browns and Miami Dolphins, except for a year in the World Football League (WFL) with the Memphis Southmen. He was known for his speed, fluid moves, grace, and jumping ability. A consistent big-play threat throughout his career, his 20.1 average yards per reception is the highest in NFL history among players with at least 300 receptions.

Donald Howard Mosebar is a former American college and professional football player who was a Center in the National Football League (NFL) for thirteen seasons during the 1980s and 1990s. He played college football for the University of Southern California, and earned All-American honors. Mosebar was selected in the first round of the 1983 NFL Draft, and played professionally for the NFL's Los Angeles Raiders.

The 1967 Oakland Raiders season was the team's eighth in Oakland. Under the command of second-year head coach John Rauch, the Raiders went 13–1 (.929), an American Football League (AFL) record, and captured their first Western Division title, four games ahead of runner-up Kansas City, the defending league champion.

The San Diego Chargers were a professional American football team that played in San Diego from 1961 until the end of the 2016 season, before relocating to Los Angeles, where the franchise had played its inaugural 1960 season. The team is now known as the Los Angeles Chargers.

The Oakland Raiders were a professional American football team that played in Oakland from its founding in 1960 to 1981 and again from 1995 to 2019 before relocating to the Las Vegas metropolitan area where they now play as the Las Vegas Raiders. Between 1982 and 1994, the team played in Los Angeles as the Los Angeles Raiders.

The Kansas City Chiefs are a professional American football franchise that began play in 1960 as the Dallas Texans. The team was a charter member of the American Football League (AFL), and now play in the National Football League (NFL).