James Rash (born July 15, 1971) is an American actor, comedian, and filmmaker. He is widely known for his role as Dean Craig Pelton on the NBC sitcom Community (2009–2015), for which he was nominated for the Critics' Choice Television Award for Best Supporting Actor in a Comedy Series in 2012. In that same year, he won the Academy Award for Best Adapted Screenplay and received a Golden Globe nomination as one of the writers of The Descendants . [1]

Rash was born in Charlotte, North Carolina, on July 15, 1971. Both he and his sister were adopted. [2] He attended Charlotte Latin School. [3] After graduating, he spent a post-graduate year at the Lawrenceville School in Lawrenceville, New Jersey. [3] He was a member of The Groundlings, the improv comedy group based in Los Angeles.

Rash played Mr. Grayson/Stitches in the 2005 film Sky High , Fenton on That '70s Show , [4] and Andrew the "whore house guy" on Reno 911! He appeared in the final episode of Friends , and played Head T.A. Philip in Slackers. From 2009 to 2015, Rash starred on Community as Craig Pelton, the dean of the community college in which the show takes place.

Rash and comedy partner Nat Faxon moved into screenwriting with a pilot in 2005 for a series entitled Adopted, which did not take off. [2] [5] They wrote the screenplay for The Descendants (2011), based on the novel of the same name, which appeared on the 2008 edition of the Black List (the most popular unproduced scripts in Hollywood at that time). [6] The film was released to critical acclaim, [1] receiving a Golden Globe nomination and winning the Academy Award for Best Adapted Screenplay. However, the final script for The Descendants was largely re-written by screenwriters and directors Alexander Payne and Jim Taylor. Payne would go on to direct the film. In an interview with Vulture, Payne discussed an agreement between Payne/Taylor and Rash/Faxon. During the awards circuit for The Descendants, Rash/Faxon would deliver the acceptance speeches for all of the awards except the Academy Award; the Academy Award speech would be handled by Payne/Taylor.

Rash and Faxon then co-wrote and co-directed the film The Way Way Back (2013), which received a standing ovation at its premiere at the Sundance Film Festival. [7] Parts of the film are based on Rash's teenage life. [5]

Rash has voiced the Marquess of Queensbury for all four seasons of the Adult Swim animated comedy Mike Tyson Mysteries . Since 2017, he has been the official voice actor for Donald Duck universe character Gyro Gearloose in the reboot of DuckTales .

Constantine Alexander Payne is an American film director, screenwriter and producer. He is best known for the films Citizen Ruth (1996), Election (1999), About Schmidt (2002), Sideways (2004), The Descendants (2011), Nebraska (2013) and Downsizing (2017). He is noted for his dark humor and satirical depictions of contemporary American society. Payne is a two-time winner of the Academy Award for Best Adapted Screenplay, and a three-time nominee of the Academy Award for Best Director. In 2017, Metacritic ranked Payne 2nd on its list of the 25 best film directors of the 21st century.

Samuel Rockwell is an American actor. He is the recipient of various accolades, including an Academy Award, a BAFTA, a Golden Globe Award, and three Screen Actors Guild Awards. He has also received nominations for two Primetime Emmy Awards and a Tony Award.

Jim Taylor is an American producer and screenwriter who has often collaborated on projects with Alexander Payne. The two are business partners in the Santa Monica based Ad Hominem Enterprises, and are credited as co-writers of six films released between 1996 and 2007: Citizen Ruth (1996), Election (1999), Jurassic Park III , About Schmidt (2002), Sideways (2004), and I Now Pronounce You Chuck and Larry. Taylor's credits as a producer include films such as Cedar Rapids and The Descendants.

William Todd Field is an American actor and filmmaker. He is known for directing three feature films, In the Bedroom (2001), Little Children (2006), and Tár (2022). He has received three Academy Award nominations.

Nathaniel Faxon is an American actor, comedian, director, and screenwriter. A frequent presence on comedic films and TV series, he won the Academy Award for Best Adapted Screenplay for co-writing The Descendants (2011) and starred in the Fox comedy series Ben and Kate (2012–2013), the FX comedy series Married (2014–2015) and voices Elfo in the Netflix adult animated television series Disenchantment (2018-). He also co-wrote and co-directed The Way, Way Back (2013) and Downhill (2020) with writing partner Jim Rash.

The Descendants is a 2011 American comedy-drama film directed by Alexander Payne. The screenplay by Payne, Nat Faxon, and Jim Rash is based on the 2007 novel of the same name by Kaui Hart Hemmings. The film stars George Clooney, Shailene Woodley, Amara Miller in her film debut, Beau Bridges, Judy Greer, Matthew Lillard, and Robert Forster, and was released by Fox Searchlight Pictures in the United States on November 18, 2011, after being screened at the 2011 Toronto International Film Festival.

The 83rd National Board of Review Awards, honoring the best in film for 2011.

The 11th New York Film Critics Online Awards, honoring the best in filmmaking in 2011, were given on 11 December 2011.

The 15th Toronto Film Critics Association Awards, honoring the best in film for 2011, were given on December 14, 2011.

The 24th Chicago Film Critics Association Awards, honoring the best in film for 2011, were announced on December 19, 2011. 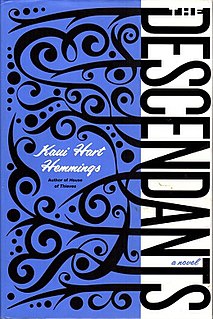 The Descendants is a novel written by Kaui Hart Hemmings. The 2011 American film The Descendants, directed by Alexander Payne, with the adapted screenplay by Payne, Nat Faxon, and Jim Rash, is based on this novel.

Kaui Hart Hemmings is an American writer. She is best known for her novel, The Descendants (2007), which was adapted into an award-winning film. 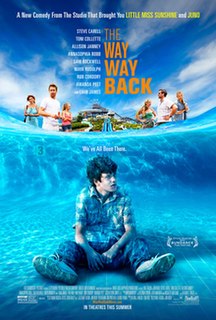 The Way, Way Back is a 2013 American coming-of-age comedy-drama film written and directed by Nat Faxon and Jim Rash in their directorial debuts. It stars Liam James as Duncan, an introverted 14-year-old who goes on summer vacation to Wareham, Massachusetts with his mother and her overbearing boyfriend. It also stars Steve Carell, Toni Collette, Allison Janney, AnnaSophia Robb, Sam Rockwell, and Maya Rudolph, with Rob Corddry, Amanda Peet, Faxon, and Rash in supporting roles.

Ava Deluca-Verley is a French-American television and film actress who is best known for her role in NBC's comedy series Growing Up Fisher, playing the daughter of Jenna Elfman and J. K. Simmons's characters.

Taylor Sheridan is an American filmmaker and actor. Sheridan first reached prominence for portraying David Hale in the FX television series Sons of Anarchy and Danny Boyd in Veronica Mars (2005–2007).

Wikimedia Commons has media related to Jim Rash .
This page is based on this Wikipedia article
Text is available under the CC BY-SA 4.0 license; additional terms may apply.
Images, videos and audio are available under their respective licenses.