Rone was educated at Skerry's College, Liverpool. After National Service with the RAMC he was an accountant until 1979 when he began studying for ordination at St Stephen's House, Oxford. [3] After a curacy in Stony Stratford he was Vicar of SS Peter and Mary Magdalene, Fordham then Rector of Kennett. He was a Canon Residentiary at Ely Cathedral from 1989 until his appointment as Archdeacon. [4]

Skerry's College was a series of colleges which primarily prepared candidates for Civil Service examinations.

An accountant is a practitioner of accounting or accountancy, which is the measurement, disclosure or provision of assurance about financial information that helps managers, investors, tax authorities and others make decisions about allocating resource(s). 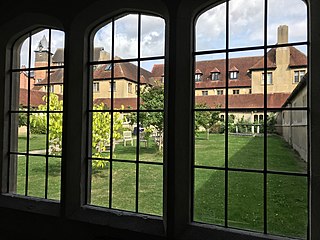 St Stephen’s House, Oxford, is an Anglican theological college and one of six religious Permanent Private Halls of the University of Oxford, England. In its mission statement the college says that it offers "formation, education, and training for a variety of qualifications and ministries rooted in the catholic tradition, helping the church give faithful witness to Christ in contemporary society" as well as an exceptional education in a "context encouraging disciplined study, academic research and personal reflection centered in prayer and worship".

Arthur John Hawes is an Anglican priest who served as Archdeacon of Lincoln from 1995-2008.

Richard David Pratt has been the C of E Archdeacon of West Cumberland since 2009.

Eric Rede Buckley was Archdeacon of Sudbury from 1930 until 1932.

George Francis Hutchins was Archdeacon of Cheltenham from 1965 to 1976.

Charles William Desmond Carroll was the Archdeacon of Blackburn from 1983 to 1985.

Francis John Marsh is a British Anglican clergyman. He was Archdeacon of Blackburn in the Church of England from 1996 until 2001.

Arthur Henry Ballard was an Anglican priest in the last third of the 20th century.

Andrew Edgar Ballard is an Anglican priest. He was Archdeacon of Rochdale from 2000 to 2005; and Archdeacon of Manchester from 2005 to 2009.

(John) Owen Jenkins was an eminent Welsh Anglican priest in the Twentieth century.

David John Banfield was Archdeacon of Bristol from 1990 until 1998.

The Ven. Christopher John Cunliffe is the current Archdeacon of Derby: he was appointed in 2006.

The Ven. Leonard Godfrey Moss, AKC was Archdeacon of Hereford from 1991 until 1997.

Mark John Crichton Wilson was the Archdeacon of Dorking in the Church of England from 1996 to 2005 when he retired.

Peter James Ballard was Archdeacon of Lancaster from 2006 to 2010.

Christopher Sidney (Chris) Sims, is an Anglican priest, a retired Archdeacon of Walsall.

Timothy Reed "Tim" Barker is a British Anglican priest. Since 2015, he has served as the Dean of Guernsey. From 2009 to 2015, he was the Archdeacon of Lincoln in the Diocese of Lincoln.

John Elijah Elvin was Archdeacon of West Ham in the Diocese of Chelmsford from 1958 until his death.