Jim Swink (March 14, 1936 – December 3, 2014) was an All-American halfback at Texas Christian University in Fort Worth, Texas. Swink grew up in Rusk, Texas, which inspired his nickname: "The Rusk Rambler". He is remembered as one of the greatest running backs in Southwest Conference history and led the Horned Frogs to win consecutive conference championships in 1955 and 1956. These victories resulted in trips to the Cotton Bowl Classic.

Swink was named an All-American player in 1955 and 1956. His best season was in 1955, [1] when he rushed for 1,283 yards (which was second-best in the nation) and led the country with 125 points scored. In just the first four games of that season he gained 484 yards and scored 10 touchdowns. [2] His best performance that year was during the rival match with Texas in Austin. During the game, Swink rushed 15 times for 235 yards and scored 26 points in a 47–20 rout of the Longhorns. In the same year, he finished second to Howard Cassady of Ohio State in the voting for the Heisman Trophy. The Longhorns' slogan and famous hand gesture, known as the "Hook 'em Horns," was created in reference to the need to mitigate Swink's prowess as a player. [3]

After finishing his degree at TCU, Swink chose to give up playing in the National Football League and attended medical school instead. In 1960, he joined the American Football League's Dallas Texans for their inaugural season.

The presence of 31 years old Captain James E. Swink, our battalion surgeon, was an additional blessing for our wounded men as they were pulled out of the wood line. During battalion-size operations, operations, Swink would often travel with us to the field. He had been assigned to the Black Lions after a 5 months stint at the 12th Evacuation Hospital in Cu-Chi, Vietnam. He was there in the aftermath of the battle helping the medics with the wounded. Jim Swink was from Rusk, Texas. He had been a famed player in his early years, earning him the moniker "the Rusk Rambler" as he led TCU to consecutive conference championships and Cotton Bowl appearances. In fact, Captain Swink was a two time "All American" halfback who finished second in the Heisman Trophy voting in 1955. After graduating from TCU, he rejected an NFL career even though drafted by the [Chicago] Bears. In numerous interviews, Swink stated he had been inspired by a physician in Rusk, Texas to pursue a medical career. It must have been a difficult decision because Swink had proven himself a formidable football player. He had led the nation in scoring and placed second in rushing in 1955. He got to play against Jim Brown, and Swink's team won. He is also remembered for being the object of the University of Texas expression, "Hook em Horns." Prior to November 12, 1955, game Texas students had come up with the oft-heard phrase in the hopes of unsettling Swink and his team, the Horned Frogs, but it didn't work. Even with thousands of Texas students screaming "Hook em Horns horns" Swink still played one of his best games, rushing for 235 yards on 15 carries for a 15.7-yard average and scored a school-record of 26 points. The Frogs trounced the Longhorns, 47–20 that afternoon.

Captain Swink also fought hard for us, and though he had little in the field to work with, just his presence was comforting to us and especially to the medics. With James Swink around there was someone to go to when a for them. Ross Phillips said Swink was accessible and didn't play the rank game. He said Swink was a fun guy who was always a dedicated doctor. During his tour, he was wounded and received a Purple Heart and a Bronze Star Medal for his outstanding contribution to the cause. The wounded soldier was beyond what a medic felt capable of handling. Captain Swink did whatever he could with the little he had in the field. He said, "We can give them some pain medication and start an IV on them or very rarely maybe a system with their airway and breathing." His biggest goal as he stated, "You get them on a helicopter as fast as you can." In another photograph taken by AP photographer Henri Huet, it shows Captain Swink with his stethoscope dangling from his neck working hard on a wounded soldier. Opposite of him is a soldier with a cigarette hanging from his lips who appears to be assisting. In the background, you can see other soldiers, one with his shirt off and two more, probably Jim Callahan and Mike Stout, working on another wounded soldier. The photograph appears to have been taken at a makeshift triage area. The medics liked Captain Swink and he had great respect for them. [4]

He later practiced medicine in Fort Worth as an orthopedic surgeon. In 1980, Swink was elected to the College Football Hall of Fame, and in 1982 he was presented with a Silver Anniversary Award by the NCAA for career achievements outside of football. In 2005, he was awarded the Doak Walker Legends Award.

Swink died on December 3, 2014, at his home in Rusk, Texas, due to complications of lymphoma. [5] [6] According to his wife, he continued his medical practice until he became ill.

James Allen is a former American football running back in the National Football League. He played college football for Oklahoma.

Othol Hershel Martin, also known as Abe Martin, was an American football player, coach, and college athletics administrator. He served as the head coach at Texas Christian University (TCU) from 1953 to 1966, compiling a record of 74–64–7. Martin was also the athletic director at Texas Christian from 1963 to 1975.

The 2007 Texas Longhorns football team represented the University of Texas at Austin in the 2007 NCAA Division I FBS football season. The team was coached by Mack Brown. The Longhorns played their home games in Darrell K Royal–Texas Memorial Stadium (DKR).

Walter William Fondren III was an all-conference football player and conservation activist. He played halfback, quarterback and punter for the Texas Longhorns from 1955 to 1957 and was the first starting quarterback for Darrell Royal. He was later a founding member of the Coastal Conservation Association.

Bobby Lackey is a former American football player who was the starting quarterback for the Texas Longhorns in the late 1950s. An all around athlete, he also played punter, kicker and defensive back and returned both punts and kick-offs. He was the team's top scorer in 1958 and 1959 and helped Texas to win a share of the 1959 Southwest Conference championship, the first of the Darrell Royal era. He was also the first Longhorn to ever appear on the cover of Sports Illustrated

The 1946 Oklahoma Sooners football team represented the University of Oklahoma in National Collegiate Athletic Association (NCAA) college football. The team was led by Jim Tatum in his first and only season as head coach. Along with first-year backfield coach Bud Wilkinson, who became the head coach himself the following year, Tatum installed the new split-T offense. An intensive recruiting effort, largely focused at veterans returning from the Second World War, helped Oklahoma to on-field success and eight of the team's new recruits eventually earned first-team All-America honors. The team improved from the previous season to an 8–3 record and a share of the Big Six Conference championship.

James Everett Saxton Jr. was an All-American football and College Hall of Fame player for the University of Texas and a finalist for the 1961 Heisman Trophy. He played one year of professional football, winning one AFL Championship with the 1962 Dallas Texans.

The 2012 Texas Longhorns football team represented the University of Texas at Austin in the 2012 NCAA Division I FBS football season. The Longhorns were led by 15th-year head coach Mack Brown and played their home games at Darrell K Royal–Texas Memorial Stadium. They were a member of the Big 12 Conference. They finished the season 9–4, 5–4 in Big 12 play to finish in a tie for third place. They were invited to the Alamo Bowl where they defeated Oregon State.

The 1921 Vanderbilt Commodores football team was an American football team representing Vanderbilt University during the 1921 Southern Intercollegiate Athletic Association football season. It was Dan McGugin's 17th season as head coach, and Wallace Wade's first season as assistant coach. Vanderbilt outscored its opponents 161–21 for a record of 7–0–1 and a share of the Southern Intercollegiate Athletic Association (SIAA) championship. The team's leading scorer was halfback Rupert Smith and its captain was "Pink" Wade, father of future Vanderbilt star Bill Wade. The Commodores played their home games at Dudley Field.

Randy McEachern is a former American football player. He started as quarterback for the Texas Longhorns. He started the 1977 season as the 4th string quarterback on an unranked team and finished as the starter of the #1 team in the country, playing for the national championship.

Trevone Dequan Boykin is a former American football quarterback. He played college football at Texas Christian University (TCU), and was signed by the Seattle Seahawks as an undrafted free agent in 2016.

The 1957 Cotton Bowl Classic was the 21st edition of the college football bowl game, played at the Cotton Bowl in Dallas, Texas, on Tuesday, January 1. Part of the 1956–57 bowl game season, it matched the independent and eighth-ranked Syracuse Orangemen and #14 TCU Horned Frogs of the Southwest Conference (SWC). Favored TCU held on to win by a point, 28–27.

The 1956 Cotton Bowl Classic was the twentieth edition of the college football bowl game, played at the Cotton Bowl in Dallas, Texas, on Monday, January 2. Part of the 1955–56 bowl game season, it matched the sixth-ranked TCU Horned Frogs of the Southwest Conference (SWC) and the #10 Ole Miss Rebels of the Southeastern Conference (SEC). Underdog Ole Miss rallied to win by a point, 14–13.

Jerrod Heard is an American football wide receiver who is a free agent. He played college football for the Texas Longhorns from 2014 to 2018.

The 2016 Texas Longhorns football team, known variously as "Texas", "UT", the "Longhorns", or the "Horns", was a collegiate American football team representing the University of Texas at Austin as a member of the Big 12 Conference in the 2016 NCAA Division I FBS football season; the 2016 team was the 124th to represent the university in college football. The Longhorns were led by third-year head coach Charlie Strong with Sterlin Gilbert as the team's offensive coordinator and Vance Bedford as the team's defensive coordinator. The team played its home games at Darrell K Royal–Texas Memorial Stadium in Austin, Texas, where the team is based.

Samuel George Ehlinger is an American football quarterback for the Texas Longhorns. He was a consensus four-star quarterback recruit coming out of Westlake High School near Austin, Texas where he broke school records held by Super Bowl-winning quarterbacks Drew Brees and Nick Foles. He committed to the University of Texas at Austin in July 2015 and joined the team two years later. In his freshman season with the Longhorns in 2017, Ehlinger split playing time with quarterback Shane Buechele, playing in nine games and compiling a 2–4 record as a starter. Ehlinger solidified his position as Texas's starting quarterback in his sophomore year, starting in all 14 games and leading his team to the Big 12 Conference Championship game for the first time since 2009 and winning the 2019 Sugar Bowl to end the season 10–4. 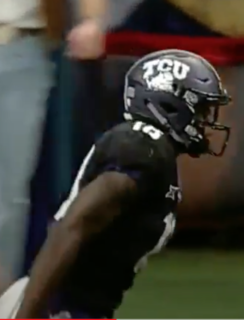 Jalen Armand Reagor is an American football wide receiver for the Philadelphia Eagles of the National Football League (NFL). He played college football at TCU and was drafted by the Eagles in the first round of the 2020 NFL Draft.