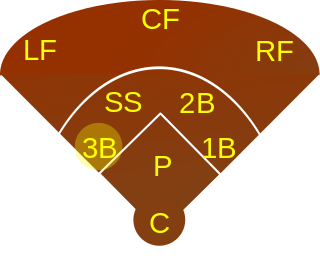 A third baseman, abbreviated 3B, is the player in baseball whose responsibility is to defend the area nearest to third base — the third of four bases a baserunner must touch in succession to score a run. In the scoring system used to record defensive plays, the third baseman is assigned the number '5'.

Burke was the regular third baseman for the Cardinals from 1903 to 1905. He was named player-manager in the middle of the 1905, season but was replaced by Stanley Robison after amassing a record of 34–56. 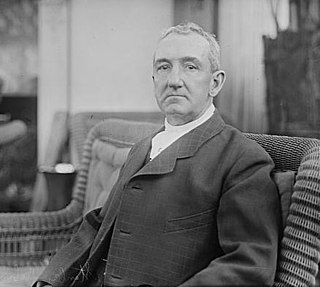 Martin Stanford "Stanley" Robison was an American owner and manager in Major League Baseball. Robison was the owner of the St. Louis Cardinals from 1899 to 1911, along with his brother Frank. He was also part-owner of the Cleveland Spiders for most of their existence, from 1887 to 1899. During the 1905 season, he took over as manager of the Cardinals for the final 50 games. He finished with a managerial record of 19 wins, 31 losses in 50 games. Born in Pittsburgh, Pennsylvania, he died in Cleveland, Ohio, where he is interred at Lake View Cemetery.

The Detroit Tigers are an American professional baseball team based in Detroit, Michigan. The Tigers compete in Major League Baseball (MLB) as a member of the American League (AL) Central division. One of the AL's eight charter franchises, the club was founded in Detroit as a member of the minor league Western League in 1894 and is the only Western League team still in its original city. They are also the oldest continuous one name, one city franchise in the AL. The Tigers have won four World Series championships, 11 AL pennants, and four AL Central division championships. The Tigers also won division titles in 1972, 1984, and 1987 as a member of the AL East. The team currently plays its home games at Comerica Park in Downtown Detroit. 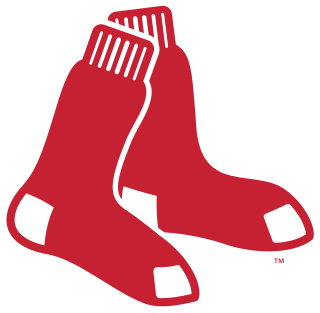 The Boston Red Sox are an American professional baseball team based in Boston, Massachusetts. The Red Sox compete in Major League Baseball (MLB) as a member club of the American League (AL) East division. The Red Sox have won nine World Series championships, tied for the third-most of any MLB team, and they have played in 13. Their most recent appearance and win was in 2018. In addition, they won the 1904 American League pennant, but were not able to defend their 1903 World Series championship when the New York Giants refused to participate in the 1904 World Series. Founded in 1901 as one of the American League's eight charter franchises, the Red Sox' home ballpark has been Fenway Park since 1912. The "Red Sox" name was chosen by the team owner, John I. Taylor, circa 1908, following the lead of previous teams that had been known as the "Boston Red Stockings", including the forerunner of the Atlanta Braves.

Early Career and return to the minors

Burke made his debut in October of 1898 for the Cleveland Spiders. He was one of many players moved from Cleveland to St. Louis the following season, a move that stocked Cleveland with inferior and inept ball players that resulted in that team producing the worst record ever in Major league baseball. Burke only played a couple of games for St. Louis, now called the St. Louis Perfectos. In 1901, he split time between the Milwaukee Brewers and Chicago White Sox of the American League. After being released by Chicago in 1901, he signed with the National League's Pittsburgh Pirates where once again he'd see spot duty. Burke never got anywhere near close to regular playing time until he was traded by Pittsburgh to the St. Louis Cardinals. In 1903, his first season with significant playing time, he batted .285 and rove in 42 runs. However, despite in appearing in over hundred games in both of the next seasons, Burke would find himself playing for the Kansas City Blues in the minor leagues. Burke never again played in the majors, finishing his career with the Fort Wayne Champs of the Central League in 1913. [1]

The Cleveland Spiders were a Major League Baseball team that played between 1887 and 1899 in Cleveland, Ohio. The team played at National League Park from 1889 to 1890 and at League Park from 1891 to 1899, when they were disbanded, along with three other teams, after a travesty of a season with a horrific 20-134 won-lost record.

The Milwaukee Brewers are an American professional baseball team based in Milwaukee, Wisconsin. The Brewers compete in Major League Baseball (MLB) as a member club of the National League (NL) Central division. The team is named for the city's association with the brewing industry. Since 2001, the Brewers have played their home games at Miller Park, which has a seating capacity of 41,900. 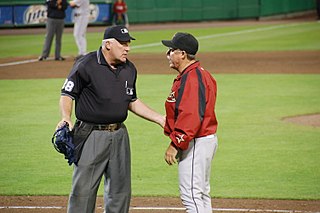 Philip Mason Garner is an American former baseball player and manager. He played in Major League Baseball as an infielder with the Oakland Athletics, Pittsburgh Pirates, Houston Astros, Los Angeles Dodgers and San Francisco Giants from 1973 to 1988. He was manager of the Astros from July 14, 2004 to August 27, 2007, leading Houston to a World Series appearance in 2005.

Nicholas Tomas Leyva is an American former professional baseball player, coach, and manager. After his retirement as a Minor League Baseball (MiLB) player, most of Leyva’s baseball career was spent as a coach. His Major League Baseball (MLB) coaching stops included the St. Louis Cardinals, Toronto Blue Jays, Milwaukee Brewers, and Pittsburgh Pirates. Leyva was the manager of the Philadelphia Phillies from 1989 though early 1991. 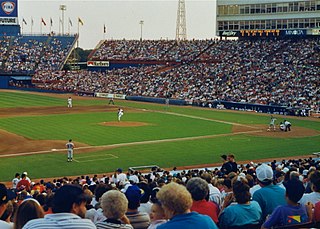 The 1979 Major League Baseball season. None of the post-season teams of 1977 or 1978 returned to this year's postseason. In a re-match of the 1971 World Series, the Pittsburgh Pirates defeated the Baltimore Orioles in seven games in the 1979 World Series.

The Willmar Stingers are a baseball team that plays in the Northwoods League, a collegiate summer baseball league. The Stingers played their inaugural season in 2010. The team plays its home games at Baker Field at Bill Taunton Stadium.