James Robson (born 23 January 1939) is an English former professional footballer who played as an inside forward. He played over 450 matches in the Football League.

Robson won the First Division with Burnley in 1960, beating Manchester City on a Monday night in the final game of the season to win the title.

In the 1962 FA Cup Final, Robson's goal against Tottenham to make it 1-1 was the 100th goal ever scored in an FA Cup final at Wembley. Burnley lost 3–1. Robson did score another goal but it was ruled off-side.

On 27 April 1966, Robson became the first Blackpool substitute to score a goal. It came in a 2–1 defeat at Manchester United. [1]

John Michael Connelly was an English footballer. He played as an outside forward and was capped 20 times for his country.

Trevor McGregor Steven is an English former footballer. He became known as a member of the successful Everton side of the 1980s, went on to be an important part of the Rangers 9-in-a-row side and won 36 international caps for England.

The 1960–61 season was the 81st season of competitive football in England. This season was a particularly historic one for domestic football in England, as Tottenham Hotspur became the first club in the twentieth century to "do the Double" by winning both the League and the FA Cup competitions in the same season.

The 1961–62 season was the 82nd season of competitive Football in England.

The 1962–63 season was the 83rd season of competitive football in England.

The 1947–48 FA Cup was the 67th staging of the world's oldest football cup competition, the Football Association Challenge Cup, commonly known as the FA Cup. Manchester United won the competition for only the second time, beating Blackpool 4–2 in the final at Wembley. 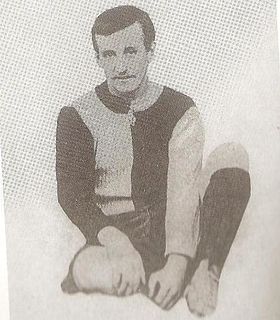 George Jabez Price was an English footballer of short stature who played mainly as a forward for Burslem Port Vale between 1896 and 1907.