Last updated May 25, 2020
District in Hebei, People's Republic of China

Jingxing Mining District (simplified Chinese :井陉矿区; traditional Chinese :井陘礦區; pinyin :Jǐngxíng Kuàngqū) is a mining district and one of eight districts of the prefecture-level city of Shijiazhuang, the capital of Hebei Province, North China. It is an enclave of Jingxing County.

Shahe is a county-level city in the prefecture-level city of Xingtai, in the southern part of Hebei province, China. 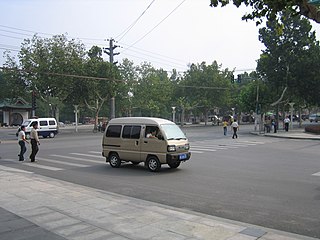 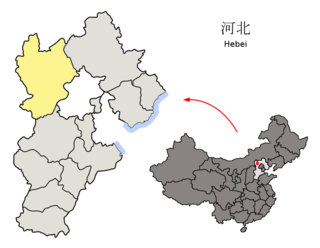 Xuanhua is an urban district of Zhangjiakou in northwestern Hebei Province, China.

Xihu District is a District under the administration of the city of Benxi, Liaoning province, People's Republic of China. It has a total area of 320 square kilometres (120 sq mi), and a population of approximately 230,000 people as of 2002.

Datong District is a district of the city of Daqing, Heilongjiang, People's Republic of China.

Xiahuayuan District is a district of the city of Zhangjiakou, Hebei province, China.

Gaizhou, formerly Gaixian, Gaiping, and Kaiping, is a county-level city in Liaoning province, China. It is under the administration of Yingkou City, which lies 31 km (19 mi) to the north-northwest, and is located at the northwest end of the Liaodong Peninsula near the northeast coast of the Bohai Sea.

Kuangshi Avenue Subdistrict is a subdistrict and the seat of Jingxing Mining District, Shijiazhuang, Hebei, People's Republic of China. As of 2011, it has 14 residential communities (居委会) under its administration.