The administration of Jizhou was transferred from Hebei province to Tianjin in 1973. Historically, it was also known as Yuyang (渔阳; 漁陽; Yúyáng) during the Tang Dynasty.

Jizhou is the only mountainous area in the Tianjin municipality, home to the renowned Mount Pan. Known as "Tianjin's backyard", the spectacular natural scenery and numerous historical monuments, including a small section of the Great Wall known as Huangyaguan, in the county means that it is a major tourist attraction. It is also well known for its abundance of unique, local fruits and nuts. 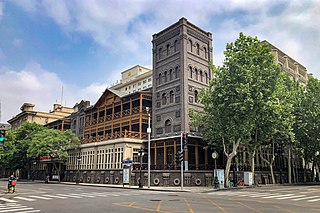 Pinggu District, formerly Pinggu County (平谷县), lies in the far east of Beijing Municipality. It has an area of 950 square kilometres (370 sq mi) and a population of 396,701. The district is subdivided into 2 subdistricts, 14 towns, and 2 townships. It borders the Beijing districts of Miyun and Shunyi to the north and west, respectively, Tianjin's Jizhou District to the southeast, and in Hebei province, Xinglong County and Sanhe to the northeast and south, respectively.

Hebei District is a district of the municipality of Tianjin, People's Republic of China. Its name literally means "District north of the River", as the district is located on the northern shore of the Hai River, part of the Grand Canal. Tianjin's famous Zhongshan Park lies within the district. Tianjin's North Train Station and many other train structures are also located in Hebei District. The district administers ten streets in total.

Xinglong County is a county in the northeast of Hebei province, bordering the municipalities of Beijing to the west and Tianjin to the southwest. It is under the administration of the prefecture-level city of Chengde, with a population of 320,000 residing in an area of 3,116 km2 (1,203 sq mi).

Baodi District is a district of the municipality of Tianjin, People's Republic of China.

Dongli District is a district of the municipality of Tianjin, People's Republic of China. Located in the district are Tianjin Binhai International Airport and Tianjin Airlines headquarters.

Lutai is a town in and the seat of Ninghe County, in the northeast of Tianjin, People's Republic of China. In the late 19th and early 20th centuries, it was the terminus for the Lutai Canal and the first extension of the Kaiping Tramway. By road, it is 65 kilometres (40 mi) from Tianjin Binhai International Airport, 85 km (53 mi) from downtown Tianjin, and 180 km (110 mi) from downtown Beijing. As of 2011, it had 28 residential communities (社区) and 37 villages under its administration.

Machang is a town of Qing County in eastern Hebei province, China, located 4 to 5 kilometres south of the border with Tianjin and 10 km (6.2 mi) northeast of the county seat. As of 2011, it has 24 villages under its administration.

Xujiazhuang Township is a township under the administration of Jizhou City in southern Hebei province, China, located about 11 kilometres (6.8 mi) west of downtown Jizhou. As of 2011, it has 28 villages under its administration.

Gubeikou is a town of Miyun District in northeastern Beijing, bordering with Luanping County, Hebei to the north and the Beijing towns of Gaoling (高岭镇) to the west, Xinchengzi (新城子镇) to the east and Taishitun (太师屯镇). The area is one of the important passes of the Great Wall of China, serving as an ancient chokepoint for travelers between the Northeast and Beijing. As of 2011, it had 4 residential communities (社区) and 9 villages under its administration.

Sanhe is a town of Bozhou District, Zunyi in northern Guizhou, People's Republic of China, located 14 kilometres (8.7 mi) south-southwest of the county seat. As of 2018, it has 4 residential communities and 8 villages under its administration. The town is situated along China National Highway 210 and G75 Lanzhou–Haikou Expressway.