João Alves Jobin Saldanha (3 July 1917 – 12 July 1990) [1] was a Brazilian journalist and football manager. He coached the Brazil national football team during the South American Qualifying to the 1970 FIFA World Cup. Nicknamed João Sem Medo (Fearless João) by Nelson Rodrigues, Saldanha played for Botafogo. He then started a career in journalism and became one of Brazil's most prolific sports columnists. He often criticised players, managers and teams, and was a member of then-illegal Brazilian Communist Party (Partido Comunista Brasileiro – PCB). [2] The 1970 FIFA World Cup was the ninth FIFA World Cup, the quadrennial international football championship for men's national teams. Held from 31 May to 21 June in Mexico, it was the first World Cup tournament staged in North America, and the first held outside Europe and South America. Teams representing 75 nations from all six populated continents entered the competition, and its qualification rounds began in May 1968. Fourteen teams qualified from this process to join host nation Mexico and defending champions England in the 16-team final tournament. El Salvador, Israel and Morocco made their first appearances at the final stage.

In 1957, Botafogo appointed him as their coach, despite his lack of managerial experience. The club won the Rio state championship that season, [2] but Saldanha resigned from the club in 1959. [3] In 1969, he was invited to take charge of the national team, and led them to a perfect 6-0 record. It is alleged that soccer federation president João Havelange appointed him in the hope that journalists would be less critical of the national team if one of their own was in charge. [2]

The Brazilian Football Confederation is the governing body of football in Brazil. Its was founded in 1914 as Federação Brasileira de Sports), and renamed to Confederação Brasileira de Desportos in 1916. The football confederation, as known today, forked in September 1979 by the dismemberment of other sports associations. Between 1914 and 1979 it was the governing body, or at least the international reference, for other olympic sports, such as tennis, athletics, Swimming, Waterpolo, Handball.

Jean-Marie Faustin Godefroid "João" de Havelange was a Brazilian lawyer, businessman, athlete and centenarian who served as the seventh President of FIFA from 1974 to 1998. His tenure as President is the second longest in FIFA's history, behind only that of Jules Rimet. He received the title of Honorary President when leaving office, but resigned in April 2013. He succeeded Stanley Rous and was succeeded by Sepp Blatter. João Havelange served as a member of the International Olympic Committee (IOC) from 1963 to 2011. He was the longest-serving active member upon his resignation. In July 2012 a Swiss prosecutor's report revealed that, during his tenure on FIFA's Executive Committee, he and his son-in-law Ricardo Teixeira took more than $41 million in bribes in connection with the award of World Cup marketing rights.

Saldanha was publicly criticised by Dorival Yustrich, coach of Flamengo. Saldanha responded by confronting him while brandishing a revolver. Saldanha was said to have fallen out of favour because of his unwillingness to select players who were personal favourites of President Emílio Garrastazu Médici, in particular striker Dario (Brazil was then a military dictatorship). [2] It is reported that Saldanha, after being told that President Médici would be pleased to see Dario in the team, answered, "well, I also have some suggestions to give in the President's ministry choices". The last straw came when the assistant manager resigned, saying that Saldanha was impossible to work with. [2]

Clube de Regatas do Flamengo, commonly referred to as Flamengo, is a Brazilian sports club based in Rio de Janeiro best known for their professional football team. 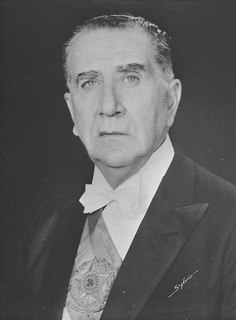 Dario José dos Santos, nicknamed Dario, or Dadá Maravilha is a former Brazilian footballer. He played as a centre-forward.

Starting from 2004, the winners of the second turn of the Campeonato Brasileiro Série A, are awarded with the "Troféu João Saldanha", given by the Brazilian newspaper Lance! . [4]

Troféu João Saldanha is an award given by the Brazilian newspaper Lance! to the winner of the second turn of the Série A. The trophy honors João Saldanha, who was a journalist and head coach, deceased on July 12, 1990, during that year's World Cup. The award was created in 2004.

Lance! is a daily sports newspaper in Brazil, and its first edition was published in 1997. Its headquarters are located in Rio de Janeiro, and they print regional versions for some of the other Brazilian states.

Paraná Clube is a Brazilian football club, established on the 19th of December, 1989, in the Vila Capanema district of Curitiba, Paraná. It is one of several Brazilian clubs called Tricolor da Vila by its fans because it has three team colors. Paraná's three colors are red, white and blue.

Ipatinga Esporte Clube, is a Brazilian football club based in Ipatinga, state of Minas Gerais, founded on May 21, 1998. During the 2013 season club played in Betim, shortly after returned to Ipatinga in 2015.

Marinho Peres, real name Mário Peres Ulibarri, was an association footballer. He played centre-back, in particular with Sport Club Internacional and the Brazilian national team. He captained the Brazilian Team to a fourth place at the World Cup 1974. He became a coach after retiring. 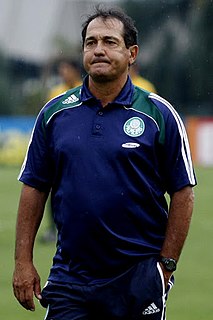 Muricy Ramalho is a Brazilian retired footballer who played as an attacking midfielder, and was a manager. His most recent position was as manager of Flamengo, until health issues forced him to step down in 2017.

Botafogo Futebol Clube is a Brazilian association football club based in Ribeirão Preto, São Paulo state, founded on October 12, 1918. The club currently competes in the Campeonato Brasileiro Série B after achieving promotion in 2018, and in the Campeonato Paulista.

Eugênio Machado Souto, commonly known as Geninho, is a Brazilian retired footballer who played as a goalkeeper, and is the manager of Avaí.

Botafogo Futebol Clube, usually known as Botafogo, or as Botafogo da Paraíba, is a Brazilian football club from João Pessoa, Paraíba state. The club won the Série D once.

Carlos Alberto Dario de Oliveira, usually known as Alfinete, is a retired professional Brazilian footballer who played as a right back for several Campeonato Brasileiro Série A clubs.

Mário Sérgio Pontes de Paiva, more commonly known as Mário Sérgio, was a Brazilian footballer and manager, who later became a commentator for Fox Sports Brazil, which he joined at the channel's inception in 2012. He died in the LaMia Airlines Flight 2933 accident in the Colombian village of Cerro Gordo, La Unión, Antioquia, while travelling with the Chapecoense football squad for the Copa Sudamericana finals on 28 November 2016.

Ricardo Pinto is a retired professional association footballer who played as a goalkeeper for several Campeonato Brasileiro Série A clubs and for Primera División Paraguaya club Cerro Porteño. He is the current coach of Paraná Clube.

The 2000 Campeonato Brasileiro Série A was the 44th edition of the Campeonato Brasileiro Série A, the top-level of professional football in Brazil. Due to legal complications, the championship was organized by Clube dos 13 instead of CBF, and was contested by 116 teams divided in modules, equivalent to their division - similar to the 1987 Copa União. It started on July 29 and ended on January 18, 2001, with Vasco da Gama winning the championship - its fourth title. The name of the championship was an homage to former CBF and FIFA president João Havelange.

Estádio General Severiano was a football stadium located in Rio de Janeiro, Brazil. It was the home stadium of Botafogo and it had a maximum capacity of 20,000 people.

Jurandir Dário Gouveia Damasceno dos Santos, commonly known as Dário or Dário Alegria, is a retired football striker who played for several clubs in the Campeonato Brasileiro Série A and the Mexican Primera División. He also participated in the Brazil national football team.

The following article presents a summary of the 2019 football (soccer) season in Brazil, which is the 118th season of competitive football in the country.