He studied at the University of Berlin (Ph.D. 1859), and was appointed rabbi of Jihlava, Moravia, in 1860. He wrote several works, including:

Jacob Ettlinger was a German rabbi and author, and one of the leaders of Orthodox Judaism. He is sometimes referred to as the Aruch la-Ner, after his best-known publication.

Martin Buber was an Austrian Jewish and Israeli philosopher best known for his philosophy of dialogue, a form of existentialism centered on the distinction between the I–Thou relationship and the I–It relationship. Born in Vienna, Buber came from a family of observant Jews, but broke with Jewish custom to pursue secular studies in philosophy. In 1902, he became the editor of the weekly Die Welt, the central organ of the Zionist movement, although he later withdrew from organizational work in Zionism. In 1923, Buber wrote his famous essay on existence, Ich und Du, and in 1925, he began translating the Hebrew Bible into the German language. 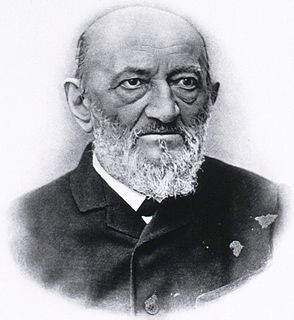 Moritz Steinschneider was a Bohemian bibliographer and Orientalist. He received his early instruction in Hebrew from his father, Jacob Steinschneider, who was not only an expert Talmudist, but was also well versed in secular science. The house of the elder Steinschneider was the rendezvous of a few progressive Hebraists, among whom was his brother-in-law, the physician and writer Gideon Brecher.

Ismar Elbogen was a German rabbi, scholar and historian.

Joseph Unger was an Austrian jurist and statesman. Having studied law at the university of his native city, he in 1850 was appointed assistant librarian, and in 1852 privatdozent, at his alma mater. The following year he was called to Prague as assistant professor at the university, and in 1855 to Vienna in a similar capacity. In 1857 he was appointed professor of jurisprudence at the latter institution. In 1867 he was successively elected a member of the Austrian Landtag and of the Reichsrat; but on account of ill health he had to resign in the following year. Appointed in 1869 by the Emperor Franz Joseph a life-member of the House of Lords, he soon became the whip of the Liberal Party. Two years later he became minister in Prince Auersperg's cabinet, but resigned upon the prime minister's defeat in 1879. In 1881 he was appointed president of the Reichsgericht. Unger converted from Judaism to Roman Catholicism in 1852. 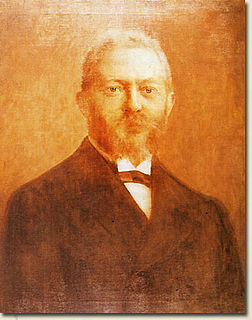 David Kaufmann was a Jewish-Austrian scholar born at Kojetín, Moravia. From 1861 to 1867 he attended the gymnasium at Kroměříž, Moravia, where he studied the Bible and Talmud with Jacob Brüll, rabbi of Kojetín, and with the latter's son Nehemiah.

Abraham Neuda was an Austrian rabbi.

Meyer Kayserling was a German rabbi and historian.

Adolf Büchler was an Austro-Hungarian rabbi, historian and theologian.

Johannes Baptista von Albertini was a German botanist, mycologist and clergyman of the Moravian Church. He was born in the town of Neuwied.

Julius Anton Glaser was an Austrian jurist and classical-liberal politician. Along with Joseph Unger he is considered to be one of the founders of modern Austrian jurisprudence.

Jacob Sonderling was a German and American Rabbi. He was born in a chassidic family and was an early Zionist. His aim was to combine art and religion.

Rabbi Dr. Adolf Rosenzweig was a German moderate liberal rabbi and Biblical and Talmudic scholar. In his publications he dealt with historical and archaeological matters.

Konrad Oebbeke was a German geologist and mineralogist. 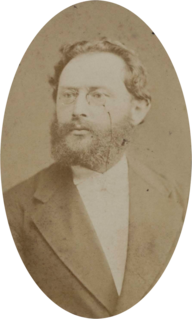 Baruch Jacob Placzek, also known by the pen name Benno Planek, was a Moravian rabbi, author, poet, orator, and naturalist. He was the last Landesrabbiner of Moravia, which position he held from 1884 until his death. As a writer, he published numerous sermons, speeches, and obituaries, as well as scientific, lyrical, and narrative works.