Joan Beverly Mansfield was born on August 27, 1928, in West St. Paul, Minnesota. Her father, Charles Smart Mansfield, [3] was a store keeper and later a railroad telegraph operator and salesman. [4]

Mansfield met McDonald's Corp. founder Ray Kroc while playing organ at the Criterion Restaurant in St. Paul, Minnesota in 1957. [9] [10] Ray said in his autobiography that he "was stunned by her blonde beauty". However, they were both married. They met again at a McDonald's conference in 1969. Within six months they had divorced their spouses and married each other. Following Kroc's death in 1984, she inherited his fortune. [11]

In 2002, Kroc Center, a large Salvation Army community center that she helped fund—to the tune of $87 million—opened to the public. She later bequeathed an additional $1.6 billion to open Salvation Army Kroc Centers across the nation, the largest one-time gift ever recorded. Several institutions in the San Diego area are named after her, including the think tank Joan B. Kroc Institute for Peace and Justice and the Joan B. Kroc School of Peace Studies- the world's top peace institution- at the University of San Diego, the St. Vincent de Paul Joan Kroc Center for the Homeless (Part of Father Joe's Villages- San Diego's largest organization helping the homeless) in downtown and the Kroc–Copley Animal Shelter in the Morena District. Additionally, Joan established and endowed University of Notre Dame's Joan B. Kroc Institute for International Peace Studies. [13] Kroc preferred to give donations anonymously, but recipient organizations often insisted on publicizing her gifts, hoping to attract new donors. [14]

Kroc was also politically active. In 1985, she spent millions of dollars in support of nuclear disarmament, which included reprinting the book Missile Envy by Helen Caldicott, as well as publishing ads in major newspapers calling for disarmament. She anonymously gifted a Paul Conrad sculpture depicting a nuclear mushroom cloud, Chain Reaction, to the city of Santa Monica, where it still sits today. Because of her public no-nukes work, Cal Thomas, a conservative syndicated columnist, called her a "McNut." [14]

Kroc is affectionately known by the citizens of Grand Forks, North Dakota, and East Grand Forks, Minnesota, as the "Angel" because of her anonymous $15 million donation to assist the cities after a devastating flood occurred there in 1997. She was revealed as the source of the funds after reporters tracked down ownership of the jet that she used to fly into the area to survey the damage. [16]

After her death in 2003, it was announced that Kroc had left the majority of her estate to the Salvation Army for the purpose of building recreation centers all across the nation. Another of her major donations was $225 million to National Public Radio (NPR) [17] [18] including $5 million to her local public radio station, San Diego's KPBS. [18]

Kroc died of brain cancer on October 12, 2003, at Rancho Santa Fe, California, at the age of 75. She was cremated and most of her remains were entombed at the El Camino Memorial Park in Sorrento Valley, San Diego. [19]

Her will included significant bequests for a number of organizations:

The biography Ray & Joan: The Man Who Made The McDonald's Fortune and The Woman Who Gave it All Away, published by Dutton in 2016 and written by Lisa Napoli, examines the Krocs' relationship.

Kroc is portrayed by actress Linda Cardellini in the 2016 American biographical drama film The Founder . [21]

Raymond Albert Kroc was an American businessman. He purchased the fast food company McDonald's in 1961 and served as its CEO from 1967 to 1973. Kroc is credited with the global expansion of McDonald's, turning it into the most successful fast food corporation in the world. Due to the company's growth under Kroc, he has also been referred to as the "founder" of the McDonald's Corporation. After retiring from McDonald's, he owned the San Diego Padres of Major League Baseball (MLB) from 1974 until his death in 1984. 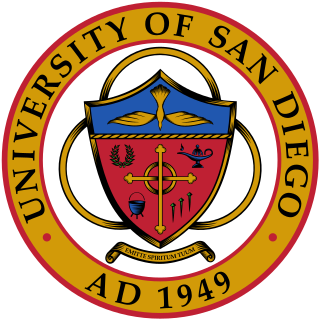 Richard McDonald and Maurice McDonald, together known as the McDonald Brothers, were American entrepreneurs who founded the fast food company McDonald's. They opened the original McDonald's restaurant in 1940 in San Bernardino, California, where they created the Speedee Service System to produce their meals, a method that would become the standard for fast food. After hiring Ray Kroc as their franchise agent in 1954, they continued to run the company until they were bought out by Kroc in 1961.

Miria Rukoza Koburunga Matembe, LL.D (honoris causa) is a former member of the Pan-African Parliament from Uganda. While serving there, she was chairperson of the Committee on Rules, Privileges and Discipline a permanent committee of the parliament.

Deshamanya Radhika Coomaraswamy is a Sri Lankan lawyer, diplomat and human rights advocate who served as the Under-Secretary-General of the United Nations, Special Representative for Children and Armed Conflict until 13 July 2012. Secretary-General Kofi Annan appointed her to the position in April 2006. She was nominated to the Constitutional Council as a civil representative on 10 September 2015. In 2017, after atrocities against the Rohingya people, she was appointed a Member of the United Nations Fact Finding Mission on Myanmar. 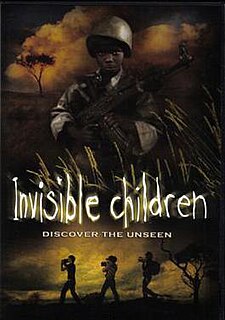 Invisible Children is a 2006 American documentary film which depicts the human rights abuses by the Lord's Resistance Army in Uganda.

June Martino was an American businesswoman who became Ray Kroc’s bookkeeper in 1948 and ultimately rose to Corporate Secretary, Treasurer, Director and part-owner of McDonald’s Corporation.

El Camino Memorial Park cemetery is located at 5600 Carroll Canyon Road in the Sorrento Valley neighborhood of San Diego. Founded in 1960, El Camino is a 220-acre (0.89 km2) memorial park and is the final resting site for Jonas Salk, as well as several members of the well-known Kroc family. There are many other prominent citizens from the greater San Diego and Los Angeles area as well.

Marta Benavides is a feminist religious leader from El Salvador. She is a theologian, ordained American Baptist minister, permaculturist, educator, and artist.

The Pine Cone egg is a jewelled enameled Easter egg made under the supervision of the Russian jeweller Peter Carl Fabergé in 1900. The Fabergé egg was made for Alexander Kelch, who presented it to his wife, Barbara (Varvara) Kelch-Bazanova.

The 130,000-square-foot (12,000 m2) Salvation Army Ray and Joan Kroc Center Coeur d'Alene has been designed to serve as a place of gathering and enrichment houses an array of education, sports, faith, arts and supportive programs.

Ballard F. Smith is a former president of the San Diego Padres major league baseball franchise. A graduate of Carleton College and the University of Minnesota Law School, Smith was a district attorney in Pennsylvania before taking over the Padres in 1979 during the time his father-in-law Ray Kroc owned the team. He led the Padres to the 1984 National League Championship and served on the Executive Committee of Major League Baseball from 1984 to 1987. He also served on the Board of Directors of the McDonald's Corporation from 1983-1997. Smith subsequently moved to Idaho and to other business interests and activities.

Chain Reaction is a peace monument and public art sculpture composed of a metal framework of stainless steel and fiberglass surrounded by concrete, depicting a mushroom cloud created by a nuclear explosion. Designed by American editorial cartoonist Paul Conrad and built by Peter M. Carlson, the 5.5-ton, 8-meter (26-foot) high sculpture was installed in 1991 adjacent to the Santa Monica Civic Center in Santa Monica, California.

Jackee Budesta Batanda is a Ugandan journalist, writer and entrepreneur. She is a senior managing partner with Success Spark Brand Limited, a communications and educational company, and a co-founder of Mastermind Africa Group Limited, a business-networking group. In 2006, Batanda worked as a peace writer at the Joan B. Kroc Institute for Peace and Justice at the University of San Diego. She was later awarded a research fellowship at the highly competitive Justice in Africa fellowship Programme with the Institute for Justice and Reconciliation in Cape Town, South Africa, in 2008. In 2010, Batanda was International Writer-in-Residence at the Housing Authors and Literature Denmark, where she commenced work on her novel, A Lesson in Forgetting. In 2012, she was also featured in The Times alongside 19 young women shaping the future of Africa. That same year she was also a finalist in the 2012 Trust Women journalism Awards. She has been writer-in-residence at Lancaster University in the UK. She was selected by the International Women's Media Foundation as the 2011–12 Elizabeth Neuffer Fellow. During the fellowship, she studied at the Massachusetts Institute of Technology's Center for International Studies and other Boston-area universities, and worked at The New York Times and The Boston Globe.

Radha Paudel born on 29 December 1973 in Mangalpur and raised in Gauriganj, Chitwan, Nepal. Her childhood experiences of discrimination, abuse, and violence encouraged her to speak in support of gender justice through her position as a humanitarian activist, nurse, and writer. She has survived years of menstrual restriction, abuse, violences and war. She dedicates her time to be a voice for those who have been silenced their entire lives, especially young girls and women in Nepal. Radha Paudel employs the three E’s visibly through her work.

The Founder is a 2016 American biographical drama film directed by John Lee Hancock and written by Robert Siegel. Starring Michael Keaton as businessman Ray Kroc, the film portrays the story of his creation of the McDonald's fast-food restaurant chain. Nick Offerman and John Carroll Lynch co-star as McDonald's founders Richard and Maurice McDonald.

Hanaa Edwar is an Iraqi women's rights activist. She is the founder and general secretary of Iraqi Al-Amal Association, and co-founder of the Iraqi Women's Network. 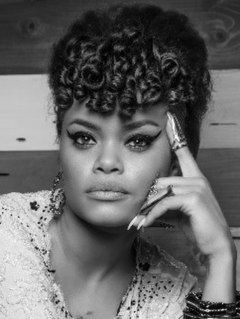 Cassandra Monique Batie, known professionally as Andra Day, is an American singer, songwriter, and actress. In 2015, she released her debut album, Cheers to the Fall. At the 2016 Grammy Awards, the album was nominated for Best R&B Album and the single, "Rise Up", was nominated for Best R&B Performance. To promote "Rise Up", she performed the song on The View, the performance earned her a Daytime Emmy Award nomination. Day also appeared alongside Stevie Wonder, who is partially credited for her discovery, in an ad for Apple TV in late 2015. In 2020, Day became one of the most-requested artists among Jazz Joy and Roy Global Radio listeners.

Jane Anyango Odongo is a Kenyan activist for peace and for women's and girls' rights. She is a grassroots activist and peacemaker, residing in one of the largest slums in Kenya. She is known for mobilizing hundreds of women who helped mitigate post election violence in the elections of 2007 and 2013. Her strategy included using women's influence on the men causing the violence, her slogan ' get the fighting men to stop the violence'.She is the founder and director of the Polycom Development Project, which empowers girls and young women in the Kibera slum area. The project focuses on topics such as hygiene, climate change, cohesion, grassroots organzining, amongst others. Her main outcome in the long run is to achieve the UN Sustainable Development Goal 10, reducing inequalities.In 2010 Peace X Peace organisation gave her its Community Peacebuilder Award. In 2016 she was one of four women invited to University of San Diego for two months on its annual Women PeaceMakers scheme.