Joan Murrell was born on June 30, 1933, in Miami, Florida, to William and Leola Murrell. [2] She was the youngest of their three daughters. [3] Her father was a dentist. Encouraged by her parents, from an early age Joan became interested in the life of the oceans, and she hoped to study marine biology professionally. Her father was an avid fisherman who took his wife and daughters on weekend fishing trips, during which Owens became interested in marine life. [3] One of her favorite books was The Silent World by Jacques Cousteau. [1] Mueller graduated from Miami's Booker T. Washington High School in 1950 and was awarded two scholarships, one from the Pepsi-Cola Company and a Sarah Maloney (Art Scholarship) at Fisk University. [3] Joan entered Fisk University in 1950. The scholarships subsidized part of her education with her father paying the major portion of her tuition. [3] However, the university did not offer a program in the marine sciences. Instead, she majored in fine art and received her degree in 1954; her minors were mathematics and psychology. [1] [2] For graduate study, Murrell entered the University of Michigan with the intention to study commercial art, but she changed her focus. She received a Master of Science degree in guidance counseling with an emphasis on reading therapy in 1956. [2]

Joan Murrell taught for two years at the University of Michigan's Children's Psychiatric Hospital, and then joined the faculty of Howard University in Washington, D.C. in 1957, where she specialized in teaching remedial English. [2] In the 1960s, she moved to Newton, Massachusetts. While there, for the Institute for Services to Education she designed programs for teaching English to educationally disadvantaged students. This work served as a model for the Upward Bound program of the United States Department of Education. [1] [2]

She returned to Washington; with a renewed interest in marine biology, and the encouragement of her friend and colleague Philip Morrison, she entered George Washington University in 1970. [1] As that institution had no undergraduate program in marine science, she constructed an equivalent with a major in geology and a minor in zoology. [1] [2] She received her B.S. in geology in 1973 and her M.S. in 1976. Continuing work toward her doctorate, she returned to Howard as a professor of geology in 1976. [2] Because Owens had sickle cell anemia traits, her research was limited by her inability to dive underwater to search for specimens. [3] Instead, she did a laboratory project at the Smithsonian Institution, working with coral samples collected by a British expedition in 1880. Her doctoral research concerned certain species of deep-sea button corals, a group of stony corals that are distinctive in that they do not form colonies. Her dissertation was titled "Microstructural Changes in the Scleractinian Families Micrabaciidae and Fungiidae and their Taxonomic and Ecologic Implications." [3] She received her PhD from George Washington University in 1984. [1]

Now publishing as Joan Murrell Owens, she continued her laboratory work at the Smithsonian, classifying and studying button corals, while advancing to the rank of associate professor in the department of geology and geography at Howard University in 1986. She described the new genus Rhombopsammia and its two species in 1986, and added a new species to the genus Letepsammia in 1994, naming L. franki for her husband, Frank A. Owens. [2] Both genera are in the family Micrabaciidae.

Joan Owens transferred to the biology department of Howard in 1992 when the department of geology and geography was phased out, and retired from full-time work in 1995. [2] [3]

Joan Owens died on May 25, 2011. She was survived by her sister, Willette M. Carlton; two daughters, Adrienne Lewis and Angela Owens; and a granddaughter, Chara Johnson. [4]

Scleractinia, also called stony corals or hard corals, are marine animals in the phylum Cnidaria that build themselves a hard skeleton. The individual animals are known as polyps and have a cylindrical body crowned by an oral disc in which a mouth is fringed with tentacles. Although some species are solitary, most are colonial. The founding polyp settles and starts to secrete calcium carbonate to protect its soft body. Solitary corals can be as much as 25 cm (10 in) across but in colonial species the polyps are usually only a few millimetres in diameter. These polyps reproduce asexually by budding, but remain attached to each other, forming a multi-polyp colony of clones with a common skeleton, which may be up to several metres in diameter or height according to species.

Porites is a genus of stony coral; they are small polyp stony (SPS) corals. They are characterised by a finger-like morphology. Members of this genus have widely spaced calices, a well-developed wall reticulum and are bilaterally symmetrical. Porites, particularly Porites lutea, often form microatolls. Corals of the genus Porites also often serve as hosts for Christmas tree worms. 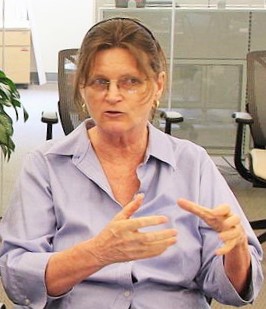 Nancy Knowlton is a coral reef biologist and is the Smithsonian Institution’s Sant Chair for Marine Science.

Haliclystus auricula is a stalked jellyfish found in the Northern hemisphere. It is the type species for its genus.

Helioporacea is an order of the subclass Octocorallia that forms massive lobed crystalline calcareous skeletons in colonial corals. These corals first appeared in the Cretaceous period. It consists of two families, Helioporidae Moseley, 1876 and Lithotelestidae Bayer & Muzik, 1977.

John West Wells was an American paleontologist, biologist and geologist who focused his research on corals.

Lithotelestidae is a family of coral in the order Helioporacea. It was erected in 1977 by Frederick Bayer and Katherine Muzik. It is characterized by a crystalline aragonite skeleton formed by stolons and calices, cylindrical calices with secondary lateral calices, and fully retractable polyps with an exoskeleton formed of calcite capstans and crosses.

Orbicella is a genus of stony corals in the Merulinidae family. The Orbicella species complex comprises three sister species, namely Orbicella faveolata, Orbicella annularis and Orbicella franksi, all of which are shallow-water, zooxanthellate species and are native to the tropical western Atlantic Ocean, the Caribbean Sea and the Gulf of Mexico.

Carden Wallace is an Australian scientist who was the director of the Museum of Tropical Queensland from 1997 to 2003. She is an expert on corals having written a "revision of the Genus Acropora". Wallace was part of a team that discovered mass spawning of coral in 1984.

Ida Shepard Oldroyd (1856–1940) was an American conchologist and Curator of Geology at Stanford University for over 20 years, who curated what was for a time the second largest collection of mollusk shells in the world. Oldroyd and her husband, Tom Shaw Oldroyd, amassed one of the largest private shell collections in California. Ida was recognized as an active and early pioneer of conchology in the western United States. She was a charter member of the American Malacological Union, which she served as vice-president in 1934 and as honorary president from 1935 to 1940.

Mildred Stratton Wilson was an American zoologist, whose work on copepods was awarded a Guggenheim Fellowship in 1955. 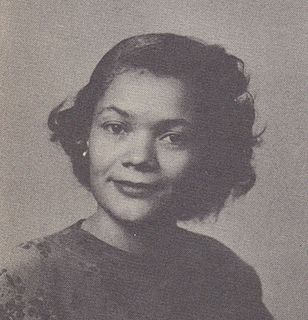 Carolyn Beatrice Parker (1917–1966) was a physicist who worked from 1943 to 1947 on the Dayton Project, the plutonium research and development arm of the Manhattan Project. She then became an assistant professor in physics at Fisk University. 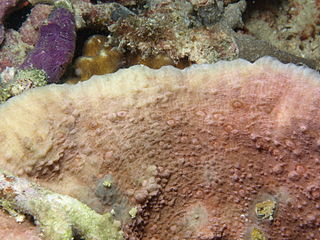 Oxypora glabra is a species of large polyp stony coral in the family Lobophylliidae. It is a colonial coral with thin encrusting laminae. It is native to the central Indo-Pacific.

Antipathella fiordensis is a species of colonial coral in the order Antipatharia, the black corals, so named because their calcareous skeletons are black. It was first described as Antipathes fiordensis by the New Zealand zoologist Ken R. Grange in 1990, from material collected in the steep-sided fiords of Fiordland in the southeastern South Island, New Zealand. A 2001 revision of the Antipatheria put this species in the newly-created genus Antipathella.

Epiphaxum is a genus of extinct anthozoans in the family Lithotelestidae.

Rhombopsammia is a genus of stony corals in the family Micrabaciidae commonly known as button corals.