Joane Cardinal-Schubert (1942 - 2009) was an artist of Kainaiwa ancestry. She was a member of the Royal Canadian Academy of Arts. She was an activist for native sovereignty. [1]

Cardinal-Schubert was born in 1942 in the town of Red Deer. She attended the Alberta College of Art + Design (now Alberta University of the Arts) in 1962 where she studied painting, printmaking, and multimedia. [2] Cardinal-Schubert's indigenous culture was omitted from the education system, the media, history books, and arts. She focussed her work primarily on her family history and Kainaiwa ancestry. [3]

Cardinal-Schubert's paintings and installations tell of her personal experiences which she weaves with social and historical events. [4] Visually her work depicts valiant Indigenous motifs while communicating about subjects that affect and impact her. [4] She takes up and revisits continuously issues of colonialism and the destruction of the environment throughout her work which at times reflects a 'collective Indian experience' [5] while at other times producing work which is also informed by trends in Western avant-garde and contemporary art. When asked about her experience as an Indigenous artist she writes:

"I had a difficult time realizing I was categorized by my personal expressions. The categorization of Native Art was attached to my work and others' works by non-Native curators. Even though I had written the same exams in University and fulfilled all the requirements of a degree...when I got out of school my content which was largely about myself, who I was, my responses to the world etc. was labelled as Native Art and then political art - they seemed to go together. Later when Native Curators came on the scene, and called the work Native art - that was different. We were declaring who we were, not being told by others". [4]

Cardinal-Schubert was the fourth woman to be admitted to the Royal Canadian Academy of Arts in 1985. [6] In 1993 she received the Commemorative Medal of Canada and 2003 she was given as honorary doctorate of laws by her alma mata. [6] [7] In 2005 she was given the Queen's Golden Jubilee Medal. In 2007 the National Aboriginal Achievement Foundation, now Indspire, gave her their Art Award. [1] On 30 June 2017, the Calgary Board of Education decided that a high school in the southeast community of Seton would be named in her honour. Trustee Amber Stewart stated in the announcement, "This is only the second high school in Calgary to be named after a woman. I am thrilled to recognize and honour the achievements and talents of a local woman, Joane Cardinal-Schubert. [8] "

Cardinal-Schubert is a member of the Kainai Nation (Káínawa, or Blood Tribe) which is a First Nation in southern Alberta, Canada with a population of 12,800 as of 2015, occupying approximately 549.7 square miles (884.6 km) with a Timber Limit in the Rocky Mountains of approximately 7.5 square miles (12.1 km). [9] They are part of the Niitsítapi or Blackfoot Confederacy of the Original People. [10] The traditional Blackfoot territory extends from the Rocky Mountains to the West; the Sand Hills to the East; to the North Saskatchewan in the North, and the Yellowstone in the South. [9]

The Blood Tribe/ Kainai and their political, cultural, and economic allies the Peigan and Siksika make up the Blackfoot Confederacy. [9] and are considered to be the oldest residents of the western prairie region [9] The Bloods have created and maintained an attitude of independence and pride in their identity as Kainai which has allowed them to successfully resist the efforts of governments, churches, and other European agencies from enacting systems into traditions which could have resulted in a harmful and disadvantageous effect on legal rights and the cultural identity of the Kainai. [9]

She helped create a space for Indigenous art in Canada and fought for the right of Native artists to be exhibited in galleries and museums. [3] In 2009 she traveled the province of Alberta on behalf of the Alberta Foundation for the Arts to meet with Indigenous artists and identify work from the various stages of their careers not represented in the Foundation's collection, and to recommend purchases which directly benefited Indigenous artists and also made their work available for future generations. [1]

Her various pursuits as an activist, curator, and writer helped to expose truths about Indigenous history, culture and contemporary issues. [1] In particular her installation and painting practice is known for its insightful ability to elicit Indigenous experience while examining the unwelcomed burden of Eurocentric educational, religious, and governmental systems that were forced upon Indigenous peoples. [1]

Throughout her artistic practice she has focused on the discursive and physical divide between museum artifacts the communities they originated from while taking into account the historical conditions that gave way to the removal of those artifacts from their communities. [11] Sick of the stereotyping of the Indigenous representation she saw in galleries, she decided to start creating things that 'have a metaphorical jump' where the viewer can understand Indigenous issues in terms they can relate to within their own culture. [5] Her installation work Preservation of the Species, directly critiqued the Museums power and authority and the way those institutions handle Indigenous artifacts and systematically control their message. [11]

Cardinal-Schubert's exhibited her artwork nationally and internationally with over 26 solo exhibitions and numerous touring group exhibitions. [6]

Douglas Joseph Cardinal is an Indigenous Canadian architect based in Ottawa, Ontario. His flowing architecture marked with smooth curvilinear forms is influenced by his Aboriginal heritage as well as European Expressionist architecture. His passion for unconventional forms and appreciation of nature and landscape were present in his life from a very young age, and consequently developed into the unique architectural style he has employed throughout his career. Cardinal is perhaps best known for his designs of the Canadian Museum of History in Gatineau, Quebec (1989) and the National Museum of the American Indian in Washington, D.C. (1998). He is considered one of Canada's most influential contemporary Indigenous architects.

Cliff Eyland was a Canadian painter, writer and curator.

Greg A. Hill is a Canadian-born First Nations artist and curator. He is Kanyen'kehaka, from Six Nations of the Grand River Territory, Ontario.

Hugh Aylmer Dempsey, is a Canadian historian, an author and the Chief Curator Emeritus of the Glenbow Museum in Calgary, Alberta. Dempsey has authored more than 20 books, focusing primarily on the history of people of the Blackfoot Confederacy. He received an honorary doctorate from the University of Calgary and was made an honorary chief of the Kainai Blackfoot in 1967. For his contributions to the study of the Plains Indians, Dempsey was awarded membership in the Order of Canada in 1975.

Bonnie Devine is an Anishinaabe/Ojibwa installation artist, performance artist, sculptor, curator, and writer from Serpent River First Nation, who lives and works in Toronto, Ontario. She is currently an associate professor at OCAD University and the counding chair of its Indigenous Visual Cultural Program.

Faye HeavyShield is a Kainai-Blood sculptor and installation artist. She is known for her repetitive use of objects and writing to create large-scale, often minimalist, site-specific installations.

Jane Ash Poitras is a Cree painter and printmaker from Canada. Her work uses the idioms of mainstream art to express the experience of Aboriginal people in Canada.

Ruth Cuthand is a Canadian artist of Plains Cree and Scottish ancestry. She is widely considered an influential feminist artist of the Canadian prairies, and is lauded for her unflinching interpretation of racism and colonialism. Her work challenges mainstream perspectives on colonialism and the relationships between “settlers” and Natives in a practice marked by political invective, humour, and a deliberate crudeness of style.

Cheryl L'Hirondelle is a Canadian multidisciplinary media artist, performer, and award-winning musician. She is of Métis/Cree (non-status/treaty), French, German, and Polish descent. Her work is tied to her cultural heritage. She explores a Cree worldview or nêhiyawin through body, mind, emotions, and spirit; examining what it means to live in contemporary space and time.

William (Bill) Laing is a Scottish/Canadian artist based in Calgary, Alberta. He is known for his printmaking and sculpture.

Morgan Wood is a curator and artist who is Stony Mountain Cree. Her family is from the Michel Callihou Band in Alberta and her Great Grandmother was Victoria Callihou. Wood received a Bachelor of Indian Art from the First Nations University of Canada, at the University of Regina in Regina, Saskatchewan.

Âhasiw Maskêgon-Iskwêw (1958–2006) was a Cree and French Métis theorist, curator and artist. Maskêgon-Iskwêw was a significant figure in the field of contemporary Indigenous arts, and a formative proponent of digital media within Indigenous communities. In their 2015 book dedication to him, Steven Loft and Kerry Swanson describe Maskêgon-Iskwêw as "one of the foremost thinkers and practitioners of Aboriginal new media art."

Linda Craddock is a Canadian visual artist living in Calgary, Alberta. Her work has been featured in exhibitions since 1973. 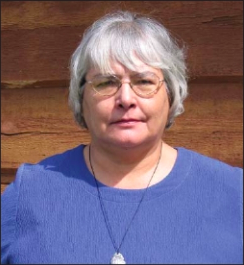 Marie Smallface Marule was a Canadian academic administrator, activist, and educator. She served as executive director of the National Indian Brotherhood (NIB), chief administrator of the World Council of Indigenous Peoples (WCIP), and secretary of the Indian Association of Alberta. Marule was president of Red Crow Community College for two decades, and led the creation of several indigenous studies programs. She was previously an assistant professor of Native American studies at the University of Lethbridge.

Gerald Tailfeathers, was one of the first Indigenous Canadians to become a professional painter. His depictions of the “Blood People”, also known as the Kainai people, were brought to life through realism and choice of colours. His work has been described as “romantic, nostalgic, and traditional” due to a majority of his work being in "Studio Style"