Johan Henri Eliza Ferrier (12 May 1910 –4 January 2010) was a Surinamese politician who served as the 1st President of Suriname from 25 November 1975 to 13 August 1980. He was that country's last governor before independence,from 1968 to 1975,and first president after it gained independence from the Netherlands.

He was named the twentieth century's most important politician in Suriname in 1999. [4]

Ferrier was born in 1910 in Suriname's largest city and capital,Paramaribo. [5] He trained as a teacher. In 1946 he assisted in the establishment of the country's National Party,while Suriname was a colony of the Netherlands. [6]

Ferrier was co-founder of the Boy Scouts van Suriname and its first Chief Scout. At age 16 he was a teacher in the district of Saramacca and founded his first Scout Group. This group still exists and now bears the name "De Johan Ferrier groep,de groep 2 Oranje Dassers". [7]

In 1946,Ferrier was one of the founding members of the National Party of Suriname. [8] Ferrier was a member of the National Council from 1946 until 1948. [5] He then went to Amsterdam in the Netherlands to learn education theory. [5] In 1950,he received his doctorate. [9] When he went back to Suriname,which had by then become an autonomous country within the Kingdom of the Netherlands,he continued to study and to have a career in education. [5] He served as both prime minister and interior minister for a three-year period from 1955 until 1958. [5] He also spent time as Suriname's head of education. [5] From 1968 until 1975 he retained the post of governor. [6] On 25 November 1975,Suriname was made independent,and Ferrier was sworn in as the first president of the country. [10] Dési Bouterse's 1980 coup d'état prompted Ferrier to resign within six months. [11]

Ferrier then accompanied his relatives to live in the Netherlands. [14] He lived with them in Oegstgeest. [15] Ferrier used to tell stories about the spider Anansi on Dutch children's television. [16] In 1986,Het Grote Anansi Boek,a picture book was released with illustrations by Noni Lichtveld. The original release was monochrome. [17] In 2010,it was re-released in colour. [16]

His daughter,Kathleen Ferrier,is a former member of the House of Representatives of the Netherlands for the Christian Democratic Appeal. In 2005,Ferrier's memoirs Last Governor,First President:The Century of Johan Ferrier,Surinamese were published. [6] The Dutch Queen gave him a knighthood. [18] An obituary in the national morning daily De Volkskrant said he had claimed:"Even in the darkest days,I kept my optimism". [18]

Ferrier died from heart failure while sleeping at home in Oegstgeest at the age of 99,four months before his 100th birthday. His body was found in the early morning on 4 January 2010. [6] [19]

Ferrier was buried on 11 January 2010,in the Dutch town of Oegstgeest,where he had been living since 1980. [20] From 16 April 2009,when former Sudan President Abdel Halim Muhammad died,until his own death,Ferrier was the world's oldest living former head of state.

On 12 May 2010,the day Ferrier would have celebrated his 100th birthday,the Johan Ferrier Fund was officially launched. The fund strives to follow in his footsteps in supporting Surinamese projects with educational and cultural goals. The Johan Ferrier Fund is an initiative of his daughter Joan Ferrier,who first presented the fund in the presence of her father in September 2009. [21]

Boy Scouts van Suriname is the national Scouting organization of Suriname. Scouting in Suriname officially started in 1924 and became a member of the World Organization of the Scout Movement (WOSM) in 1968. The coeducational association has 2,601 members.

Jagernath Lachmon,also Jaggernath Lachmon,was a Surinamese politician. He was one of the founders of the Progressive Reform Party (VHP),an Indo-Surinamese party founded in 1947 of which he served as President until his death.

Johannes Samuel Petrus "Johan" Kraag was a Surinamese politician who served as the President of Suriname from 29 December 1990,until 16 September 1991.

Hendrick Rudolf "Henk" Chin A Sen was a Surinamese politician who served as the President of Suriname from 15 August 1980 until 4 February 1982. 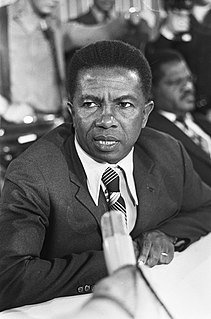 Emile Linus Alfred Wijntuin was a Surinamese politician who served as Chairman of the National Assembly of Suriname from 1975 until the aftermath of the 1980 Surinamese coup d'état. Wijntuin was a member of the Progressive Surinamese People's Party (PSV).

Paul Bhagwandas was a Suriname battalion commander. He was one of the sergeants who participated in a military coup in Suriname on 25 February 1980. Bhagwandas was the third man in the military dictatorship after Dési Bouterse and Roy Horb and was known as "the executioner of Fort Zeelandia".

Herman Harry Rijkaard was a Surinamese footballer who played as a forward for S.V. Robinhood in the SVB Hoofdklasse,F.C. Blauw-Wit in the Dutch Eredivisie,and for IJ.V.V. Stormvogels in the Eerste Divisie.

Wensley Rinaldo Bundel is a former Surinamese football manager and player who last managed S.V. Transvaal in the Surinamese Hoofdklasse.

Roy Dennis Horb was a Surinamese military officer. He was one of the sergeants who committed a military coup in Suriname on 25 February 1980,and the right hand man of army leader Dési Bouterse.

Surendre Sradhanand "Soerinder" Rambocus was a Surinamese serviceman. For a short period,he was the highest ranking officer of the Suriname National Army. He was involved in the unsuccessful coup d'état of March 1982 against the then dictator of Suriname,Dési Bouterse,and was executed on 8 December 1982 as one of the December murders.

Baal Indradj Oemrawsingh was a Surinamese professor of biochemistry at the University of Suriname,and member of the National Assembly of Suriname between 1977 and 1980. He was considered the political leader behind the Rambocus Coup of March 1982. He was one of the victims killed by the military regime of Dési Bouterse.

Henry Roëll Neijhorst is a Surinamese economist who served as Prime Minister of Suriname from 31 March to 9 December 1982. He also served as Minister of Finance from 15 March to 15 August 1980.

Ida Does is a Surinamese-born,Dutch journalist,writer,and documentary filmmaker. After working at Omroep West as a reporter,editor-in-chief,and program director,she began making independent films,mainly focused on art,culture,colonialism,and social justice. Her documentaries have won awards in Canada,the Netherlands,and Trinidad and Tobago.

David George Findlay was a Surinamese politician,editor,and writer. He was the owner and chief editor of the newspaper De West.

Jan Buiskool was Surinamese Prime Minister and judge in Suriname,the Netherlands and Tangier.

Leonardus Josephus "Jozef" Weidmann was a Dutch-Surinamese Catholic priest,politician and union leader. He is one of the founders of the Progressive Surinamese People's Party (PSV). Weidmann played a leading role in establishing universal suffrage in Suriname,and was the founder of Progressive Workers Organisation,the oldest recognised trade union in Suriname.

The Progressive National Party was a political party in Suriname.